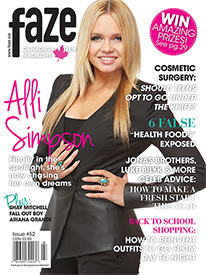 Alli Simpson moved to the U.S., when her brother, Cody, launched his music career. But what did the future have in store for Alli?

You may have seen her in the background—behind the scenes in her brother’s music videos, following along on the red carpet or peeking out from backstage before a show. Alli Simpson’s older brother, Cody, has made quite a name for himself on the pop music scene, garnering much success across North America—as well as back home in Australia—with singles like “iYiYi,” “Not Just You” and “Pretty Brown Eyes.”

Cody has always been very adamant that his supportive family has been a key to his success. “My family’s always reassuring me that they’re here to support me and encourage me with everything that I do,” Cody told us, when we sat down with him for his cover feature on the spring 2012 issue of Faze. 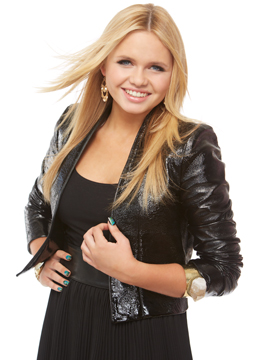 At first, it took awhile to adjust to her new surroundings. Alli grew up in Gold Coast, Australia, but once her brother’s music career took off a couple of years ago, the whole family jumped continents. “The first year, I was settling into America,” she says. “Moving away from my friends, it was a big deal.”

You would think that seeing Cody in the spotlight might prompt her to immediately desire a similar career path, but she wasn’t so sure in the beginning. “At first, I was a bit overwhelmed by Cody’s success,” she says.

Alli started making more appearances at events with him, getting her first taste of what being in the spotlight really meant. “Being on the red carpet and having photos taken and everybody calling your name—it’s super-surreal,” she says.

Though the spotlight may have been a bit blinding initially, it made her wonder. “I started to think, what if I start getting into my own stuff?” she says. “You know, we could work together on things and support each other.”

The more she thought about it, the more that dream started to take shape. But Alli didn’t want to pick just one dream. She loved fashion, beauty, acting and singing; she wanted to have a hand in all different sorts of industries that would allow her to travel the world and try new things.

Especially when it comes to the music part of her dream, questions arise as to whether or not there will be any competition between her and Cody. Alli confidently squashes all of those notions. “I think Cody and I can talk about the decisions that we make,” she says. “With us, I never feel any competition. I don’t want there to be. And there never will be, because Cody and I are so close; we’re just supporting each other.” 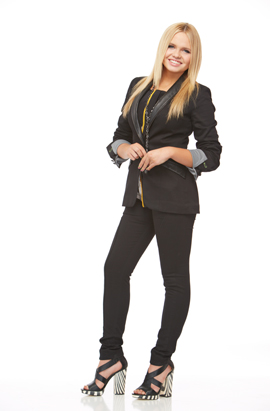 On the fashion and beauty side of things, Alli has been delving into the world of nails. She has partnered with imPRESS Press-On Manicure by Broadway Nails, acting as their brand ambassador.

It was after the Nickelodeon Kids’ Choice Awards that Alli first discovered the convenient stick-on nail product. The company asked Cody to bring some home for his sister. Knowing how much she loved fun fashion accessories—especially nails—Cody delivered the bag to Alli. “He brought them home to me one day, and I thought, ‘This is really cool! I’ve never seen anything this easy and this awesome.’ So, I got really excited,” she says.

Then, the company reached out to Alli, asking her to come on board and design her own signature line. “I was stoked,” she says. “It didn’t feel real until I did my first photo shoot, and I was like, ‘Whoa, this is
actually happening.’”

In addition to the nail line, Alli is also pursuing the other aspects of her dream: acting and singing. “I’m taking a lot of acting lessons, and I’m going to start auditioning,” she says. “I’m also getting into music. I’m going to, very soon, record a single, which I’m nervous about. I’m not a big one to sing, because I always just get shy. But Cody keeps telling me that I’m good and that I should try it. You know, it’s always good to try something new, so we’ll see what happens with that.”

Since our chat with Alli, she has indeed added singer to her resume, releasing her first single, “Why I’m Single,” which has already garnered her over two million hits on YouTube. She’s also appeared in Cody’s video for “Pretty Brown Eyes” and continues to model for the Pastry shoe line. Add in maintaining her blog, allisimpson.com, with regular updates and posts, and you’ve got one busy girl. 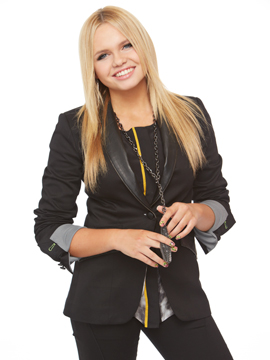 Along with encouragement, the siblings also give each other advice whenever it’s needed. “He gives me advice every day, just as I do for him,” she says. “He always tells me to make sure that what I’m doing is what I love to do.”
With advice, encouragement and support from the entire Simpson family, Alli is pursuing her dreams and stepping out into her own spotlight, which is completely unique from her brother’s.

Even though we can all be tempted to feel the strain of another’s bright spotlight—whether it’s a family member or a close friend—it’s important to recognize that your own light doesn’t have to be diminished by theirs. If you so choose, it can just burn brighter, as you support each other. “I think that you should never feel overshadowed by anyone else, because they’re different than you are,” she says. “You should just stick to who you are.”

Alli is happily taking one day at a time, pursuing her talents and dreams and seeing where the road will lead her. “If there’s something that you’re really passionate about, you should just go for it and don’t let anyone else stand in your way,” she says. “You might feel like it’s a competition or that someone is standing in your way, but you should just keep working hard, and things will happen.”

Manicure Back to School Signature Series by Broadway Nails

So, what’s in Alli’s signature line?

“There are four different styles, but they come with nail dresses, and they’re all pre-cut, so youcan design them however you want. You get the basic nail colour, and then you can stick patterns on it however you want and wherever you want. I think that’s fun because you can design your own.” 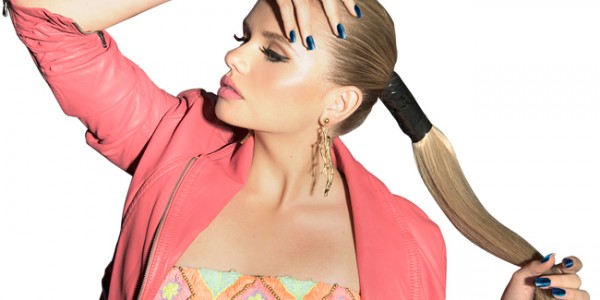 A special thanks to imPRESS nails!

On the cover, Alli is wearing a CAITLIN POWER blazer and shorts, ARMED rings, imPRESS nails and the stylist’s own tank-top.

On page 18 and 22, Alli is wearing a BLAK.I blazer and pants, a CAITLIN POWER shirt, an ARMED necklace, Town Shoes leather heels and imPRESS nails.

On page 20, Alli is wearing a CAITLIN POWER patent leather jacket, a BLAK.I pleated skirt, an ARMED bracelet and earrings, imPRESS nails and the stylist’s own belt and tank-top.