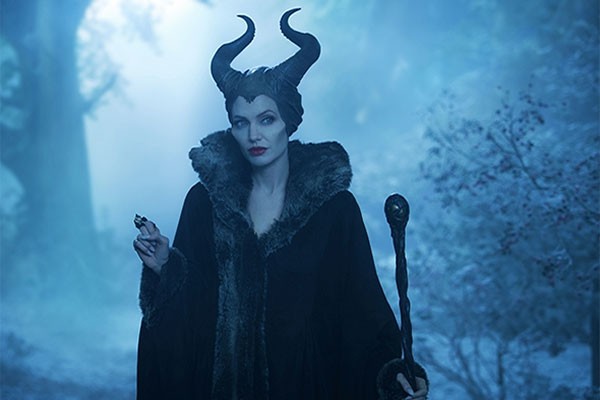 In the growing trend of fairy tale reinventions, Maleficent takes the story of Sleeping Beauty that we all grew up with and turns it on its horned head.

We start out with the comparison between the magical land of The Moors and the human kingdom. One is full of light, love and rainbows; the other is full of greedy old men. The young fairy Maleficent (Angelina Jolie) is charming and all the creatures in The Moors love her. One day, she meets Stefan (Sharlto Copley), who has stolen into the magical realm, but is now hiding and afraid. They start an innocent friendship, but then eventually fall in love.

However, it was not meant to be. They drift apart–Stefan trying to climb the corporate ladder at the castle and Maleficent somehow being awarded leader status in The Moors (maybe they had a vote off-camera?).

Fast forward a bit: the King of the human kingdom declares war on The Moors, but is defeated by Maleficent and her minions (largely because she has these crazy-huge, eage-type wings that just blow away the competition). But the King isn’t done. He wants revenge (dun, dun, dun).

Stefan sees his golden opportunity. In order to be crowned king, he must kill Maleficent. But when he goes to find her and they reconnect, with a brief talk and cuddle (puke), he slips a roofie in her drink. He intends to kill her, but can’t stomach it. Instead, he slices off her wings. She wakes up and cries bloody murder across the kingdoms. Now, her turn for revenge. She’s just a hell of a lot better at it than King No Name.

Most of the middle part is the fairy tale we know all too well (enter evil, pointy, leather-clad, way-too-much-makeup Maleficent). But, there are a few interesting twists (which I won’t spoil). 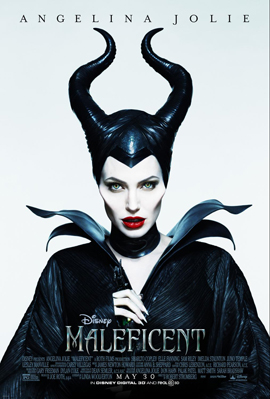 The film’s trailer includes one screen before the main title appears, which just reads “Angelina Jolie is.” You could just stop there. People would flock to see the film.

The world’s fascination with Ms. Jolie has always been something of a mystery to me (but there’s a great/funny article about her and this film, sub-titled “A fairy tale about the evil spell Angelina Jolie has cast on America” that you should definitely read). Not that I dislike her–I just haven’t felt the awe most people get when they hear her name. But, she’s a powerful female who stands up for her rights and for the rights of others, for which I have only the utmost of respect.

So, it’s odd to me that Angelina’s performance is perhaps the thing I really enjoyed most about this movie. Like, really enjoyed. And I only settled into that liking AFTER she turns “evil.” Seeing her cuddle up demurely to some old childhood friend just felt wrong. With reason and purpose behind her spells and trickery, she makes her villain status seem way more fun. Elle Fanning (who plays Princess Aurora, aka Sleeping Beauty) is mostly unmemorable. All she seems to do is smile and giggle (while I gagged).

Not that this was her fault; I’m certain her character was written that way to provide a stark contrast to Angelina’s wickedly awesome darkness. But still, I feel like she could have been more three-dimensional and still provided a glimpse into the light, love and rainbows that Maleficent needs to experience again.

Still, if you’re a fan of Angelina, or just curious about her villainous character, give this flick a shot.

(Also, watch out for a certain Jolie-Pitt child to make a special appearance.) 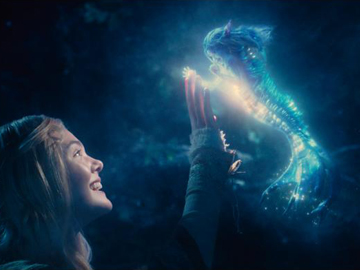 Action: Tons. Magnificent wings that soar through the sky. Epic battles on the ground. Water sprites racing over the water. This film does keep the pace going nicely.

Humour: Angelina Jolie delivers a few chuckle-worthy lines, which are smattered throughout, an ease to some of the over-dramatic tension.

Love: All I can say without spoiling the ending is that there’s unconventional twist to this version of the fairy tale–which, other than Angelina, is perhaps the main redeeming quality of the film as a whole.

Check out the trailer: