“A fascinating journey into the evolution of mankind.” 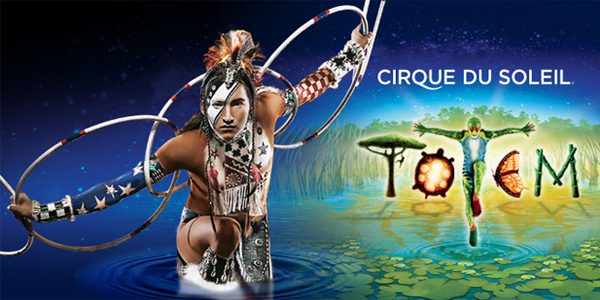 If you’ve ever seen a Cirque du Soleil production then your expectations are probably pretty high for this one. If you haven’t seen one of their shows…then where have you been for the past 27 years?! Living in a cardboard box?! Joking–sort of.

Cirque du Soleil is a Montreal-based Canadian entertainment company that uses a mix of circus arts and street entertainment to create some of the most spectacular shows on the planet. Seriously. It was founded in 1984 by two former street performers: Guy Laliberté and Daniel Gauthier.

Now they tour all over the world and entertain thousands and thousands of people with their larger than life acrobatics, stunts, sets, music and generally mind-blowing routines.

One of their new shows, Totem, first premiered in Montreal back in April of 2011 and will be coming to Toronto this summer. The theme of the show is the evolution of mankind, from the earliest days to our current aspirations, and it takes a lot of its inspiration from mankind’s myths and stories of creation and development. 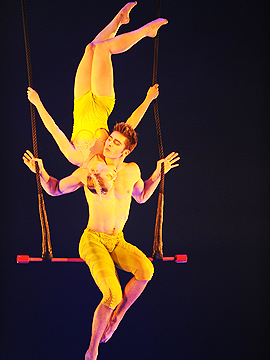 We spoke with a Guy (and a Marc)

Faze got a chance to chat with two of the creative geniuses behind the scenes of Totem–Guy Dubuc and Marc Lessard–who are the Composers and Musical Directors for the show.

FZ: Based on its reputation, people tend to expect a lot from Cirque du Soleil shows—what level of pressure did you feel going into creating the music for it?

Guy & Marc: We’ve been working with Cirque for 8 years now. This is our first main creation for a permanent show. Before that, we did a lot of special events–we did one show in Spain, one show anywhere. So, we did a lot of those, which gave us a lot of experience. So, for us it wasn’t a lot of pressure–it was a big challenge, but we knew where we were going.

FZ: What’s going through your mind on the opening night for a show like this?

Guy & Marc: It’s quite exciting. It’s hard to describe–it’s like all the work you’ve doing for a year and a half, and the first show, it’s like our little baby.

FZ: What kind of background or education do you need to be a composer or musical director?

Guy & Marc: Both of us–first of all–we’ve working together for about 15 years. We did a lot of TV shows and stuff like that. And like we said, we’ve been working with Cirque for about 10 years, so we’ve learned a lot about writing for a circus act. That’s helped a lot. And we’ve been to school. I started played drums when I was five… You gotta be crazy, you know. Being an artist, you’ve got to put your life into it and do a lot of sacrifice. For that show, most of the time it’s 7 days a week, 15 hours a day… But you don’t count the hours.

We’ll be check out the show when it arrives in Toronto–be sure to check back for our review! 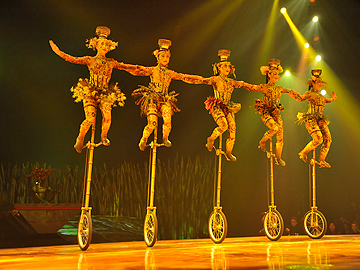 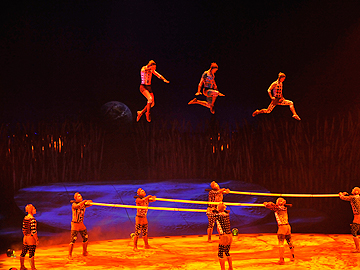 TOTEM comes to Toronto August 11th. For all tour dates check out this link.