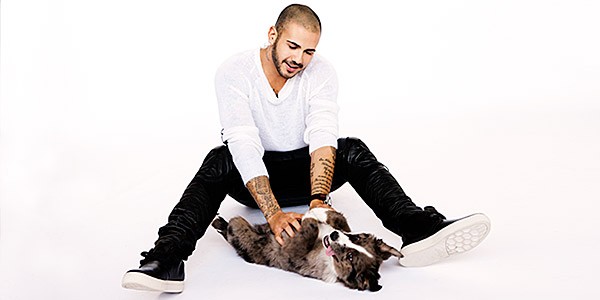 Beneath the glitz and glamour of their Hollywood-style jobs, stars can sometimes struggle to stay true to themselves. With the release of his second album, Danny Fernandes shows the world that he’s not afraid to forge his own path and let fans see the real Danny.

Cover shoots always have that certain air about them—when the big day arrives, the excitement from everyone on set is evident: from the stylist sorting through her numerous wardrobe selections one more time, to the photographer testing various lighting styles to get just the right look, to the interns laying out a wealth of snacks on the table. Yes, we get to do these shoots several times a year, but it’s still not an everyday occurrence and the anticipation of such a fun day is enough to keep a smile on my face for many hours before, during and after.

Everything is prepped and ready to go when this issue’s cover guy of choice arrives on the scene. Now, this is the part when some people might expect to read about the entourage that pours along beside him, or the latte that he demands to be placed in his outstretched hand or the designer outfit and sunglasses he insists on using to shield himself from the ongoings of the day. Well, sorry to disappoint, but as Danny Fernandes walks into the studio, he wears a comfortable track suit and carries nothing but a smile for those of us who waited for his arrival. 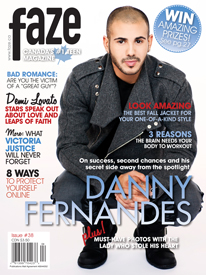 Danny is one of those rare stars who, along with his plethora of talents on the stage, carries with him an authentic presence that cannot be faked. His greeting is warm. His handshake never fails to become a bear hug. He is genuinely happy to see you.

I’ve had the pleasure of meeting and interviewing Danny a few times before and am pleasantly surprised to find he always remembers me by name—a rare occurrence, when I am sure to some that I’m just that-girl-who-works-at-Faze. The photo that was taken of us at our first introduction is definitely a favourite of mine—Danny didn’t skip a beat when I asked to take a fun pic with him. The photo is goofy and relaxed and fun—everything you want in a good interview.

That day, he didn’t hesitate to share the spotlight with me and it brought out a very real side to Danny. Today is no different.

When I mentioned the idea of bringing in his two puppies—Bug (the Australian shepherd) and Lady (the mini pug)—for the shoot, Danny’s eyes just lit right up. An opportunity to show his family off to his fans? He was on board from the first word. 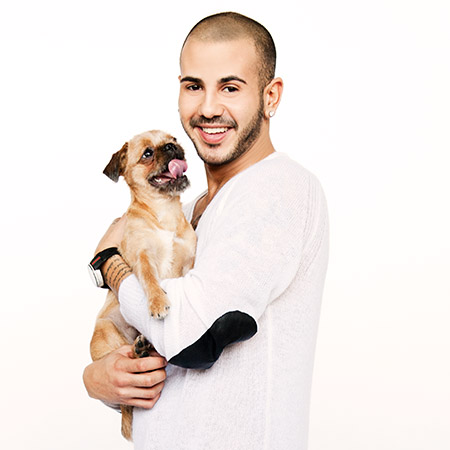 Of course, while Bug and Lady are new additions to his family, there are other members that have also enjoyed the spotlight. Danny’s older brother Shawn Desman broke onto the music scene in 2002 and garnered a lot of Canadian attention. When Danny—who appeared as a dancer in some of Shawn’s music videos back then—decided to follow suit and pursue a career as a musician, he didn’t have it any easier because his bro got there first.

Despite Shawn’s cautions about the music business in Canada, Danny pushed forward with his dream, independently recording “Curious”—his first single. “I just thought, I’m gonna try it out. If it doesn’t work, it doesn’t work,” he says. The song made it into the club loop in Germany and onto the charts in Canada. The buzz had just begun.

“After that,” Danny explains, “I met the CEO of my record label now, CP Records, and he was like, ‘How do you have a top-20 hit in Canada and you do not have a record deal? An album? Or the next single, for that matter?”

Knowing how much interest Danny had attracted all on his own, CP Records was eager to add him to their roster and most people would have jumped in blindly at the first mention of such an opportunity. But Danny knew how serious this decision was and didn’t commit to the record deal right away. “It took me like two weeks to sign it, because I was just like, “Do I really want to do this? My whole life is gonna change if this happens to me.’”

After serious consideration—one can only imagine what those two weeks were like—he took the pen and signed. Though he knew his world was about to be turned upside down, he took the leap of faith. “I didn’t care,” he says. “I love music, so I signed the deal. And my whole life has changed.”

And the biggest change in his life? “People thinking I’m not normal,” he tells me. This “normal” guy started pumping out hit after hit, following up “Curious” with his next single “Private Dancer” (featuring rapper and fellow labelmate Belly) and, shortly after, “Private Dancer,” “Fantasy” and “Never Again”—all off of his first album Intro. Because the label wanted to follow up his huge independent success with a full record, everything about Intro was rushed—not careless, just one crazy whirlwind for an artist who wanted it all. “I didn’t get to do much because it was all so quick,” says Danny. “I liked the music—I just wanted to be involved more.” 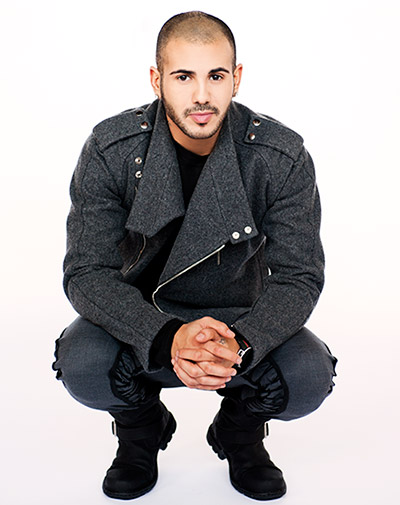 Danny learned a great deal from his first experiences with the Canadian music scene, but his life as a musician was not always his own. “[The label] obviously did nothing but good for me,” recalls Danny. “But when someone else is running your life and telling you what to do…it sucks. I pretty much put my life in someone else’s hands and said ‘here’s my life, do what you want with it.’”

Not being in control can be quite frightening, but sometimes, it’s all about having a little faith. Danny had seen what the label had done for artists like Belly and Massari, and any hesitations about the hands in which he had placed his career were quickly dissolved when CP Records embraced him as one of their own.

“It became like a family,” he says of the experience. “They took me into their home not knowing who I was, and I went in without knowing who they were.”Suddenly, the guys he had seen only on TV were his colleagues, mentors and housemates. “The first week I signed to the record label, I moved into Belly’s house for three months. I walked in and he welcomed me with open arms. He was the nicest guy I’ve ever met. We connected and that was it—I stayed there for three months and we recorded the whole album.”

Knowing he wanted a lot of time to put more of himself into the second album, when the first hit, he was already working ahead: writing, recording, producing. And the new record, AUTOMATICLUV—out in November 2010—is the final product of three years of hard work. Featuring “Automatic,” the first single—which has already achieved great success on the charts—as well as collaborations with labelmates Mia Martina and Belly, Marianas Trench’s Josh Ramsay and the long-awaited collaboration with Shawn Desman.

Listening to this second album, you can hear a new and fresh sound, unlike anything on the first one. “It’s completely different. My friends hear it and they’re like, ‘Uh, is that you?’ And I’m like, ‘Yeah, that’s me. That’s the thing, it’s ME.’”

Proud to say that he had a hand in every stage of development, Danny is clearly happy about the overall result—especially because it means his fans get to see the real him, no holding back. “I want them to see all of it.”
It’s always a risk to put yourself out there, to be vulnerable enough to let everyone around you know who you really are. And it couldn’t be truer with releasing a second album. It will determine the rest of your career—for good, or for bad. “The second album is make it or break it. You flop this album, you just quit your job. Don’t ever come back,” Danny tells me. But he has a positive outlook for his future. “I honestly think this is a great album. I put in everything I had.”

The risk of putting yourself out there—your real, no holds barred, this-is-who-I-am-take-it-or-leave-it self—is high. But the rewards? Priceless.

Ever meet somebody that you just instantly like? You can’t help it, they have this glow and confidence about them that just cannot be faked. You may even feel a little envious because you wish you could be so open with others. These are the people who know who they are, (perhaps more importantly) like who they are, and aren’t afraid to share that with you.

I’m going to go out on a limb here to let you all in on a little secret: Danny Fernandes is one of those people. Yes, he has a natural charisma on stage, a voice that makes girls swoon and dance skills that just make you want to groove along. But all of that talent shines through because he is comfortable with himself, first and foremost, and he wants others to feel that way around him too.

“I just wish people would see me as a normal guy,” he says.“ Honestly, I’m a great guy: I’m fun, I’m funny, I’m a normal person, just like everybody else.”

Now, I get it. Most “normal” people don’t have a record deal or travel to perform on stages across the globe. But when he’s not working, Danny keeps things pretty simple. Eats a lot of good food (ladies, here’s a guy who can cook), spends time with his family, works out at the gym—he may even get to sleep in every once in a while… if it weren’t for the endless energy of Bug and Lady, who are eager to play in the early morning light.

Actually, they’re eager to play pretty much any time of day. But on a shoot like this, with the light-hearted fun of the two puppies—along with Danny’s enthusiasm to play along—the timing is just right.

And the best part about our time in the studio? It’s real. We didn’t hire stand-in canines to make our star look cuter. We just let Danny be Danny. And his smile says it was a right fit.

“I don’t go around thinking that I’m better than anyone else, ‘cause I’m not,” he says. “This is what I love to do, and it just happens that I’m on TV and I’m on the radio… Other than that, I’m just plain old Danny.” 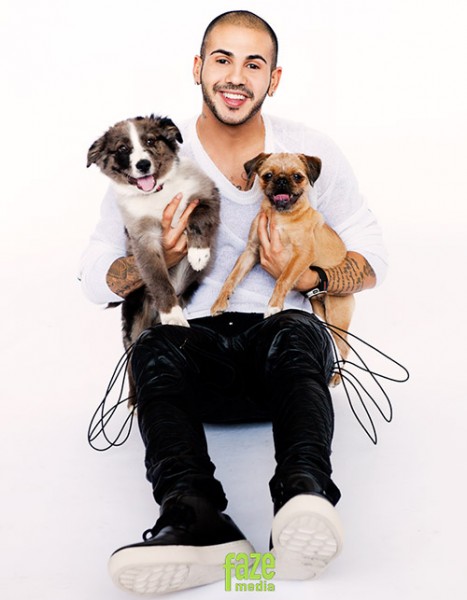 Based on his hit singles, here is stuff you need to know about Danny Fernandes…

I would “never again” do this: go on Behemoth
I am “addicted” to: Red Bull
I’ve always been “curious” about: How do they get the caramel in the Caramilk bar?
I would love to be a “passenger” in this person’s car: Eva Mendes
When someone says something negative to me, my “automatic” response is: Mike!