“That’s the only time I’ve ever broken a few bones, is snowboarding,” Emily says to us casually during our interview. “It’s so much fun.” 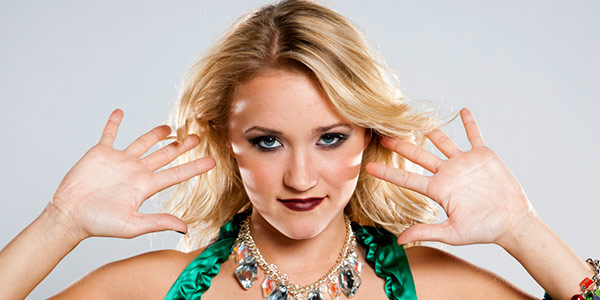 To be honest, a tough comment like that is a little unexpected, coming from the girl who sits across from me all glammed-up with dramatic makeup, gorgeous blonde curls and a stunning, ruffled grey dress. The image of her racing down the face of a mountainous peak while decked out in our photo shoot’s outfit-of-choice, pish-poshing shattered limbs—just for the thrill of it all—flashes in my mind, before I can shake it out. 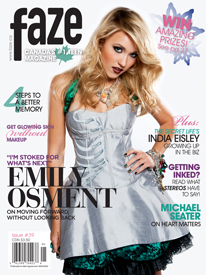 Well, of course she doesn’t snowboard in a dress, so the thought was definitely left field. However, when we are used to seeing our favourite celebs all red-carpet ready, it’s hard to imagine them outside of that image, doing the same kinds of things as regular people. But nobody is red-carpet every day, so it’s safe to assume that there is a great deal of their “real people” lives that we don’t see. Yet, it’s easy to put people in a neat little box and sum up their existence in one word: star.

But the life of Emily Osment is indeed very real and very 3-dimensional.

Most of you might immediately associate her with the iconic show Hannah Montana, where she played Lilly Truscott, best friend to Miley Stewart (and, of course, Lilly’s alter-ego Lola Luftnagle, best friend to Hannah Montana) for four seasons. Yet all good things must come to an end, and this spring will see the last episode of the show that so many have to come to love. 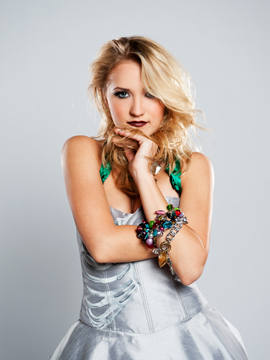 For Emily, the curtain has already closed. “It’s completely over! I actually just watched [the last episode],” she says with excitement. “The producers sent me a copy the other week and I called Miley afterward and I was like, ‘We’re so cute!’”

Though she was sad to say goodbye, Emily says it ended at the right time. “We were all ready for it. We went into the fourth season knowing that it was going to be shorter and knowing that is was ending right from the start,” she says. “I’m stoked for what’s next. I got out of there and a week later I was on tour in Canada for two months. I was happy to move on and do something else that I love.”

1. Don’t go for success—do it to satisfy your creative endeavours.

2. Don’t let things get in your way. If you really want it, you’ll work forever to get it.

3. Surround yourself with happy, positive people who support what you’re trying to do.

Not even missing a beat, Emily has already taken the difficult next step and made her move into music full time. She followed up her EP, All the Right Wrongs, with her debut album, Fight or Flight, and has already garnered great reviews for both the lead single, “Let’s Be Friends,” and the album as a whole.
With a sound that’s a little more electro than the punk feel we heard with her first EP, Emily sees this venture as a definite next step—to something better, that is. “It’s a completely different sound, it’s a different vibe, it’s brand new,” she says. While her EP gave her a good start, Emily says she really found her voice with this album.

Not only does this record show off her vocal talent, it demonstrates her song writing skills as well. “I spent months and months writing this thing and months in the studio and it’s really become a part of who I am,” she tells me. “It’s just strange to have 11 little pieces of my soul out there in the world right now, because every one of these songs came from me and came from a personal experience.” 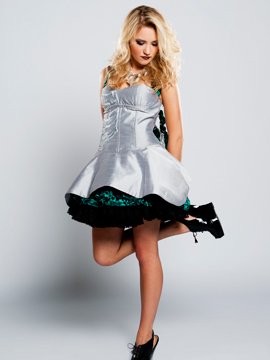 But just like every next step, whether it’s moving from acting to music, junior high to high school or high school to university, things can be a little nerve-wracking. Or a lot.

“It’s hard,” Emily reflects. “I have so many friends who are going through that transition of summer, being at home with all their friends and then going off to college and splitting up. My best friend lives in New York now, when she used to live two blocks from me. And that’s the hardest thing: people moving away, starting something new, starting at a new school, dealing with your roommates, if you don’t like them and that kind of thing—I’m doing that too.”

Although she is taking a year off to pursue her music career (college is still a major goal for her—she wants to major in conceptual physics), Emily pushes past the fear of the unknown and makes a conscious decision to be positive about each new step she takes. “It’s a wonderful thing and you should be so proud of yourself and see it as a new adventure and a new step. I’m excited! I’m so excited.”

A part of that adventure is recognizing that, as individuals, no one is just one thing. There are multiple aspects to our personalities—which is what makes life such an incredible journey! It’s all in the discovery: both within yourself and others.

“People might only see you as the drama kid, or the nerd kid, and they are always going to put you in that spot,” Emily explains.

Clearly she’s had experience with being judged at first sight, but it hasn’t affected how she sees herself. “I’m capable of doing many things,” Emily begins. “I’m a phenomenal golfer. I love to act. I can sing. I can play guitar. I write music. I can dance really well. I can cook. I do a lot of things. I do A LOT of things. And you just have to get to know me. I don’t judge a book by its cover. I don’t look at one person and go, ‘Oh, Justin Bieber is a musician.’ But he might also be a pro race car driver. I don’t know—I don’t know him. You can’t just put someone in one place…no one just does one thing.” 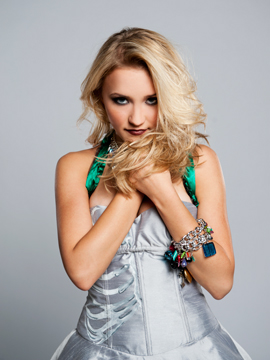 With a little help from those around her—people who made her want to be the best version of herself—Emily found that the negative comments just fell away. Concentrating on the positive instead, she was able to, with confidence and poise, take the next step in her journey. Goodbye Hannah Montana; hello musical stardom.

It can be hard to move from something that is comfortable and familiar and good, to something that is unknown. It’s like staring into the dark abyss. Take a blind step into that? No thanks—I’m good here. But even though it might be difficult, and the butterflies in your stomach are more like gigantic bats crashing into everything and threatening to run you off the path, Emily stresses that each next step is completely worth it. You just need to have a little faith.

“I’m worried for the future,” she says, thinking of all the possible places her life could take her. “But it’s a great worry, because I know that there are amazing things coming, no matter what they may be.”

“Would you rather?” with Emily Osment

Win a Grammy or an Oscar? OSCAR

Be able to fly or read people’s minds? FLY

Be able to stop time while you sleep or never need to do laundry again? STOP TIME—I don’t even need to know what the other one is

Vacation somewhere you’ve already been and love or try some place new? TRY SOME PLACE NEW

Spend the holidays with snow or sun? SNOW

Eat something chocolate or vanilla? CHOCOLATE

So Emily…if you were stranded on a desert island…

Who would you bring to keep you company?
I have been stranded on a desert island—no, I mean, I went to the Bahamas. And I brought my best friend with me and we had the best time I’ve ever had in my life. So I would bring her anywhere. We could be stuck in an elevator and have a good time.

What one item would you need to have with you for entertainment?
A Sudoku puzzle book

What would you spend your time doing?

(I’m very handy. I feel like if I was on an island—Lord of the Flies—I would survive. I would be the one making all the food. I’m very proactive about that kind of stuff and I can never sit idle for very long. I could do well on Survivor—if I can have a toothbrush, I would be okay.)

What would be the first thing you would eat after being rescued?
You’re not supposed to eat anything too crazy. I watch Survivor: sometimes, when Jeff Probst, would come out there with a cheeseburger and say, “I know you’re so hungry.” And they would eat the cheeseburger and they would get sick, because they’re so used to eating rice. I feel like I would start simple, with maybe a taco.

In above photos, Emily is wearing a hand-painted dress created by our friend Sacha Columbia Bell, The Cat’s Meow crinoline, John Fluevog shoes and Made You Look jewellery.
Photography by Caitlin Cronenberg
Styling by Carolee Custus
Hair and makeup by Paul Venoit

Love This Look: Sweaters With Flare