“I’ve seen people get their hands cut off, a ten-year-old girl raped and then die, and so many men and women burned alive … so many times I just cried inside my heart because I didn’t dare cry out loud.”
—14-year-old girl abducted by the Revolutionary United Front in Sierra Leone 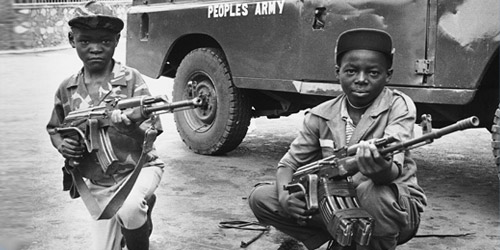 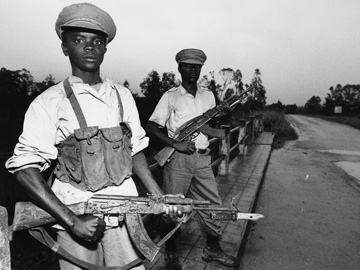 You’re lying in your bed and slowly drift off to sleep. Suddenly, you are awakened by violent screams.

You are frozen with fear. The door of your room bursts open, and before you know it, you have been picked up by strange men in uniform and are being dragged out of your house and thrown into a truck with twenty other teenagers your age. It is still dark outside and difficult to see exactly what is going on. But you already know what’s happening.

You are about to become a “child soldier”.

For thousands under the age of eighteen, this is their reality. More than 300,000 child soldiers are fighting in armed conflicts in more than thirty countries worldwide.

According to one group commander in the Democratic Republic of Congo, “[children] make good fighters because they’re young and want to show off. They think it’s all a game, so they’re fearless.”

A large number come from disrupted family backgrounds, economically or socially deprived families, or are children who come from conflict zones themselves. 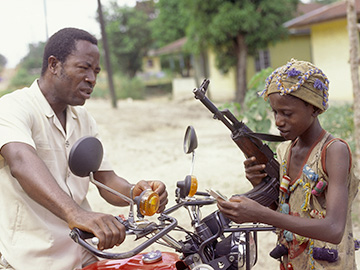 Widely perceived to be a cheap and expendable commodity, child soldiers tend to receive little or no training before being thrust into the front line. In the early 1980s, during the Iran-Iraq war, thousands of Iranian children, many straight from school, were sent with popular militias to the front line, often given a symbolic key to the paradise promised them as martyrs.

Most prevalent are child soldiers in Africa and Asia, but across the globe it is a growing phenomenon. One of the reasons behind this growth is the shortage of male recruits in countries at war. And with the technological development of smaller, more lightweight weapons, children are able to load, carry and fire deadly arms.

One former child soldier from Burundi stated that, ” My first role was to carry a torch for grown-up rebels. Later, I was shown how to use hand grenades. Barely within a month or so, I was carrying an AK-47 rifle or even a G3.” 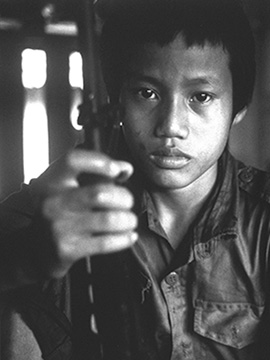 Once recruited, the children are often treated brutally, and punishments for mistakes or desertion are severe.

‘Susan’, a 16-year-old soldier abducted by the Lord’s Resistance Army in Uganda, recalls, “One boy tried to escape [from the rebels], but he was caught… His hands were tied, and then they made us, the other new captives, kill him with a stick. I felt sick. I knew this boy from before. We were from the same village. I refused to kill him and they told me they would shoot me. They pointed a gun at me, so I had to do it. The boy was asking me, “Why are you doing this?” I said I had no choice. After we killed him, they made us smear his blood on our arms… They said we had to do this so we would not fear death and so we would not try to escape … I still dream about the boy from my village who I killed. I see him in my dreams, and he is talking to me and saying I killed him for nothing, and I am crying.”

Not all child soldiers are forced to kill, yet the horrors they suffer will continue to haunt them for the rest of their lives. One Peruvian woman recruited by The Shining Path at the age of 11 recalls, “They beat all the people there, old and young, they killed them all, nearly 10 people … like dogs they killed them … I didn’t kill anyone, but I saw them killing … the children who were with them killed too … with weapons … they made us drink the blood of these people …”

Besides the risk of death or injury in combat, child soldiers suffer disproportionately from the rigours of military life. Younger children collapse under heavy loads; malnutrition, respiratory and skin infections and other ailments are frequent.

Child soldiers may also be at additional risk of drug and alcohol abuse (these substances are often used to recruit children or desensitize them for violence), sexually-transmitted disease including HIV/AIDS, and unwanted pregnancies. 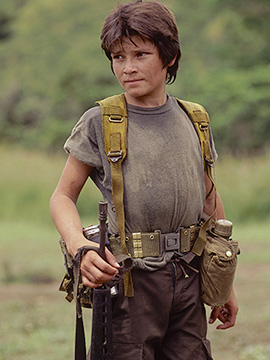 Harsh training regimes and other forms of ill-treatment often lead to casualties and even deaths among young recruits. Emilio, who was recruited by the Guatemalan army at age 14, says, “The army was a nightmare. We suffered greatly from the cruel treatment we received. We were constantly beaten, mostly for no reason at all, just to keep us in a state of terror. I still have a scar on my lip and sharp pains in my stomach from being brutally kicked by the older soldiers. The food was scarce, and they made us walk with heavy loads, much too heavy for our small and malnourished bodies. They forced me to learn how to fight the enemy, in a war that I didn’t understand why it was being fought.”

The new child soldiers protocol establishes eighteen as the minimum age for direct participation in hostilities, for compulsory recruitment, and for any recruitment or use in hostilities by non-governmental armed groups.

By late May 2001, a year after its adoption, 79 countries had signed the treaty..

Despite the endorsements made, more than half of the countries that signed have not followed them in practice. It is apparent that protocols and proposals offer little help to the children who are brutally forced into the violence of war. Political pressure from the international community is needed to help the situation. Evidently, there is still much work to be done until no child soldiers are used in war.

As you drift off to sleep tonight, give some thought to those children who are dragged out of their beds and conscripted to fight in armed conflicts and treasure the fact that you are safe under your covers.

The #K3Challenge “Thank You For Your Kindness” Giveaway

How The Pandemic May Have Changed Fashion For The Better