This year, Team Canada is sending 221 athletes to compete at the 2014 Sochi Winter Olympics. And included in those 221 Olympians is a record-breaking number of 100 female athletes—the most Canada has ever sent.

With that much girl power hitting the slopes, ice, arenas and tracks, it’s definitely something Faze readers can look forward to.

And to help you get to know a couple of names—because, let’s face it, 221 is a lot to keep an eye out for—we’ve turned the spotlight onto three female athletes, who prove that a little bit of dreaming, a lot of determination and a healthy dose of girl power is the best combination for achieving your dreams and making it big! 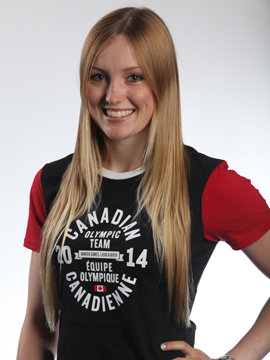 It’s fast, it’s downhill and it involves a display of tricks, turns and jumps. But Justine Dufour-Lapointe makes mogul skiing, a form of freestyle skiing, look like a piece of cake.

Inspired to participate in the sport by the likes of her older sisters, Justine can now do what she does best with the people she loves best.

The 19-year-old makes up one third of the Dufour-Lapointe sisters—the other two being Chloe, 22, and Maxime, 24—who will all be competing at Sochi. It’s the first time siblings have competed in the same event in Olympic history.

Justine, like her sisters, started skiing at the age of three. Coming from parents who love the winter activity, it’s not a surprise that a hobby soon turned into a passion for the girls. 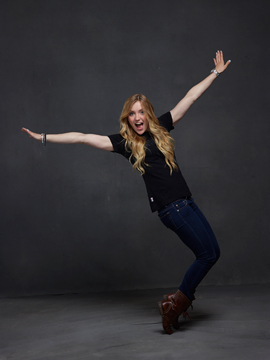 And while she may be the youngest of the trio, at 19 years old, Justine’s proving she has what it takes. While her coach described her as just “all speedand really raw” two years ago, Justine has since grown into the competitor she’s meant to be.

Labelled the Fédération Internationale de Ski (FIS) World Cup rookie of the 2011-2012 season, the Montreal, Quebec native worked even harder in the next year. At the 2013 FIS Freestyle Skiing World Championships she placed third. Currently, Justine is ranked second in the world, one spot behind American skier and Olympic Champion Hannah Kearney.

In just a few days, Justine, along with her sisters, will set her sights on a podium finish, hoping to dominate the moguls events.

And on those days you may not see Justine on the slopes, she can be found shopping, dancing, sailing with her family on their boat, or continuing her hobbies in fashion, interior design, BMX or photography.

One superstition she sticks to is wearing a specific pair of underwear before competitions. If she wins a gold medal, someone direct me to where she goes shopping.

While that sentence is Gabrielle Daleman’s favourite motto, the Newmarket, Ontario native has definitely turned those words into a reality.

Skating since the age of four, Gabrielle has proven she has what it takes to represent Canada, working hard and following her dream. 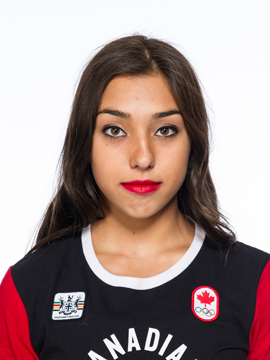 In 2012, she was crowned the Canadian Junior Champion. In 2013, she won second place in her first year at a senior level at the Canadian championship. The same year, Gabrielle matched a record (Canada’s best ladies’ result—made in 2002) when she placed sixth at the International Skating Union (ISU) World Junior Championships.

And while the star on skates has been making waves—or more accurately, figure eights on the ice—she’s been pushing herself to one day make it to the Olympics. Her coach has described her as a horse, always on the go, always pushing herself, repeating the mantra, “If better is possible, good isn’t good enough.”

Inspired by the likes of Joannie Rochette—she watched the Olympic bronze medalist compete in Turin 2006—Gabrielle has done all she can to make sure she’d get there one day.

That day has come earlier than expected.

Now, the recently-turned 16-year-old, and the youngest Olympian for Team Canada, is competing as a part of the figure skating team at Sochi 2014. The team also includes, to her excitement, Tessa Scott, Scott Moir, and Patrick Chan.

Between juggling practices and high school, Gabrielle doesn’t get much time on her hands to be a teenager, but when she does her free time is filled with music, taking pictures, drawing or collecting magnets from the places she’s travelled.

She spent four years on the senior team for the Canadian Luge team, she spent another three on the senior. Now, Kimberley McRae will spend the next two weeks representing her country.

In 2012, the luger said her biggest ambition was to represent Canada in the 2014 Olympic Winter Games in Sochi. A year and a half later, she will be.

Kimberley fell in love with the sport when she was at a ski show in her hometown of Calgary, Alberta in 2004. The Canadian Luge Association had a booth set up; she tried it out, joined a recruitment program and the rest is history. 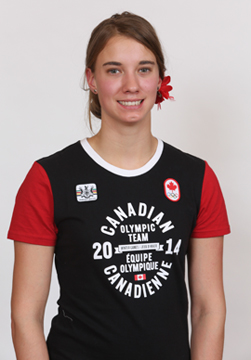 Since then, Kimberley has earned a silver medal in the 2013 23-Under Championship, placed 7th in the World Championship and now ranks within the Top 10 on a worldwide level.

As much as she is an inspiration, going up to 140 km/h down a track, Kimberley has been vocal about the importance of active lifestyles, especially for children. For Kimberley, going outside and playing is crucial for the growth and development of young children. It’s one reason why she spent the last year volunteering at a golf tournament for Sonshine Daycare in Calgary, and helping at a gala for the Big Brothers and Sisters program.

Kimberley gets ready for all her races by listening to country music to warm up. When she’s not on the track, she likes to spend time with family, friends, going fishing, hiking, playing soccer, reading, scuba diving and boogie boarding.

On top of her love for luge, the 21-year-old also hopes to pursue a career in the medical field.

And once she’s settled down from her high from Sochi, Kimberley will go back to her roots and help out with a prostate cancer fundraiser that she’s planned—an event which, of course, incorporates some luging.

Will A Weighted Blanket Really Help You Sleep Better?