Some kids dream of seeing their names in lights. Melissa just wanted her name in the credits. 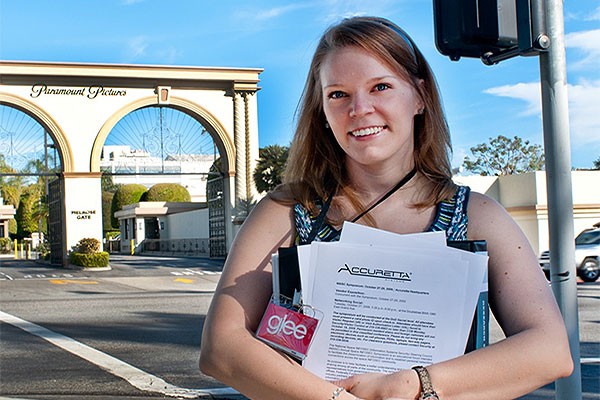 St. Albert, Alberta is a small town, about 20 minutes from Edmonton and over 2,800 km from Hollywood. But the journey from working at the local movie theatre to working on Hollywood blockbuster movies is even farther.

So how do you make that happen? Ask Melissa Krystofiak.

At the age of 25, she has successfully worked her way from her small-town roots to gaining “sort of a big deal” status.

“The movie world is a tough one to get into. If you’re not someone’s famous kid or the neighbour of Steven Spielberg, then it’s tricky to squeeze your way in there,” says Melissa. “It’s been hard, but it’s been worth it.”

Melissa’s path began while she was training to be something else completely. “I wanted to be Martha Stewart,” she says with a laugh. She loved the clean look and feel of Stewart’s magazines, so she enrolled at the University of Alberta to study for her Bachelor of Design.

During her last year at U of A, one assignment shuffled her deck and sent her on a completely different career path.

“One of our school projects was to design two clocks that would fit in with a movie’s set…. So I chose Moulin Rouge, a very elaborately designed movie,” says Melissa. “As soon as that project was over I was like, ‘This is it.’ I love design, but designing something that’s for a narrative, such as film—and where the sky’s the limit when it comes to design—it was amazing. I was like, ‘I have to be doing this.’” 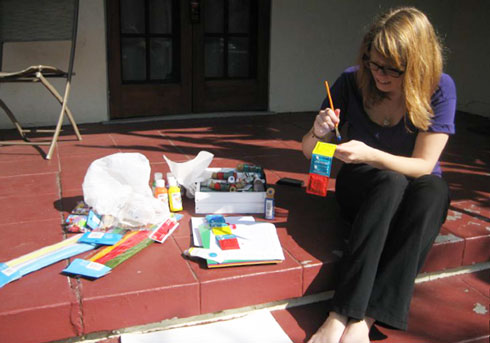 So, armed with a new purpose in life, the 21-year-old set her sights on the American Film Institute (AFI). Even though the prestigious school only accepts 14 new students a year, Melissa says the hardest part wasn’t getting accepted, it was uprooting her life.

“I didn’t know anyone in Los Angeles; I don’t have any family in the state, so I packed up all my belongings and drove from St. Albert to Los Angeles in my car… That was a little stressful, getting my whole entire life together in L.A.”

After completing two years at AFI, Melissa earned a Master of Fine Arts. She quickly picked up work where she could (not always paid) and started making industry contacts. One of those contacts got her onto the lot for Sony Pictures Studios, where she hustled her way into an internship.

“Nobody can just walk onto the Sony lot. I happened to have a friend who was working in the administration part of filming. I asked him for a favour: I was like, ‘Hey can I come for lunch, just so I have an excuse to be on the lot?’” says Melissa. Her friend agreed to help.

“So then [when I got there] I called the arts department coordinator and I asked her, ‘Hey, I’m here for lunch, can I pop in and just show you my portfolio? Super-quick.’ She was like, ‘Well I need to walk to the post office,” and I said, ‘I’ll walk with you.’”

Melissa’s impromptu interview then played out with her “power walking,” while flipping through her portfolio with business cards tucked under her arm. Not ideal, but she was impressive enough to land an internship with Sony.

Her growing resume as a production designer now boasts work on TV’s wildly successful Glee, as well as the upcoming blockbuster Transformers 3. She gets to work her dream job and says she loves that there’s no such thing as a typical day for her.

“It could be painting guns for a horror movie one day and the next you’re assembling kindergarten art-room picture frames.”

After achieving so much at such a young age, Melissa still has one goal she hopes she can scratch off her list. Melissa paid her way through school by working at a local movie theatre. She said she always dreamed of coming back home, sitting in a seat at the local theatre and bracing herself for the end credits.

“That would be great,” says Melissa. “To go home for Christmas and watch a movie and see my name.” 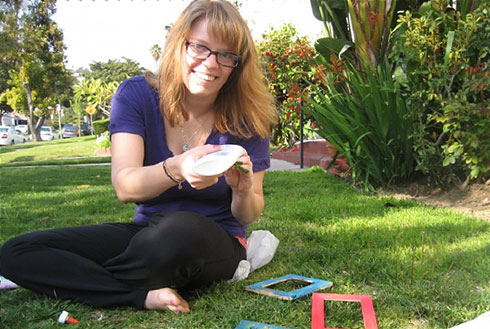