Part of the recent British invasion into North America, singer-songwriter Ed Sheeran is at the top of his game… but only because he isn’t playing one. 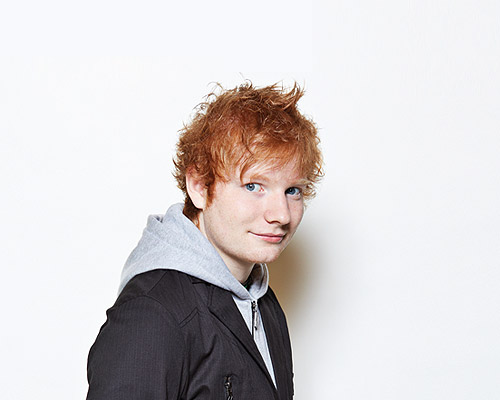 While other artists may immediately step out into the middle of the stage, looking for that spotlight to hit them, Ed is the type of musician content with letting his music fill the room with its powerful melody and message, while he’s tucked in the corner, out of sight, living in the moment. “I think if I was trying to get a record deal and trying to get noticed, I would have got discouraged, but I was just kind of playing anywhere and everywhere,” he says about first starting out. “I was trying to become the best I could be as a live performer. It was all about experience.” 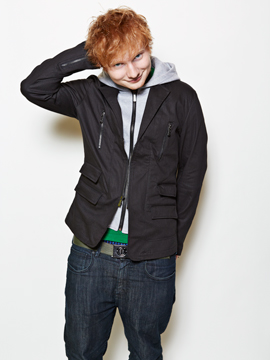 While he has consciously made an effort to live in the present moment and enjoy every step of his story to success, the minute he walks on set of our shoot, you can tell he’s not too sure about this new role as cover material. “I didn’t really think about it too much in the photo shoot because there weren’t very many photos being taken, which was good,” Ed says to me afterward. “There’s kind of a smoke screen in front of me, which is the music, but I think if you took that away I wouldn’t be an Armani underwear model tomorrow. If I was, they wouldn’t sell too many pairs of underwear,” he jokes.

But the decision to put him on the cover didn’t come after admiring his vibrant red hair or gorgeous baby blues; our team was unanimous about having Ed Sheeran on the cover because his music—a unique combination of acoustic pop-rock with the occasional beatbox—is instantly inspiring. And now we know his story is too.

His album + has already been a huge success, going four times platinum in the UK and gold here in Canada. With singles like “The A Team,” “You Need Me, I Don’t Need You” and (my favourite) “Lego House,” Ed has won over the hearts of fans all over the world. Even those who seemed to have eyes only for fellow UK residents One Direction took notice when he appeared in their album credits for the song “Moments.” He also recently worked with Taylor Swift, co-writing a song for her record earlier this year, after learning that she had been a fan for some time. And he had the world’s attention on stage at the closing ceremonies for the 2012 Olympic Games in London this summer when he performed Pink Floyd’s”Wish You Were Here.” 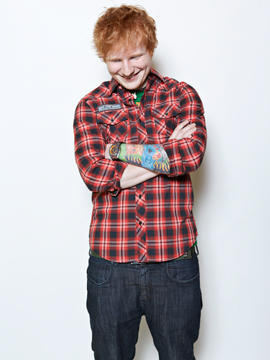 In order to fully appreciate his present successes—and what are sure to be future achievements — you have to take a look back at where it all started.

Ed Sheeran grew up in Suffolk, which is a mostly rural area, to the northeast of London. He first picked up a guitar around age 11 and learned to beat box by imitating YouTube videos. Then, at 16, he decided to drop out of school and move to London on his own to pursue his dreams of becoming a musician. “It was the choice between staying in school, going to university and trying to get a job, or dropping out and seeing if the music thing would work,” Ed says. “From the age of 16, I had to take it very seriously because it was the only thing that I was doing at that time.”

Preferring an educational route of trial and error, Ed set out to produce his own music, sell independent EPs and book his own gigs—all “without any money or any contacts.” He looked to British musician James Morrison as an inspiration of someone who earned his success one show at a time. “He played loads of shows; that’s how it worked for him,” Ed says.

Exceeding the number of shows his role model racked up, at one point, Ed had performed over 300 shows in one year alone. But his risky move paid off. “I think people work well under pressure,” he says, thinking about his decision to go in, all or nothing. “I didn’t have confidence, but you work on that and get more confident as it goes on.” 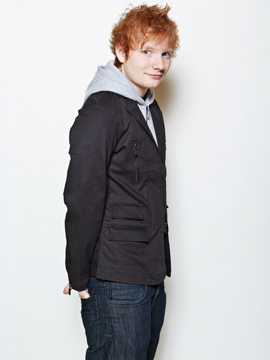 While signing a record deal was a major accomplishment for Ed, it wasn’t his main goal during his early days. “My main kind of focus wasn’t to become a worldwide superstar; it was just to get my music [out there] and build a fan base.”

And that’s exactly what he did. Before his commercial success, Ed released an EP called “No. 5 Collaborations Project” which included his work with some underground UK rappers. Without radio play, television promotion or a label, the EP shot to number two on iTunes. “That was the time where I realized that the fan base was quite extensive,” says Ed.

It was only a few months after the release of that EP that Ed found himself signing with Atlantic Records. His fi rst single, capturing him even more attention, was “The A Team”—a ballad with a dark and powerful message about the cyclical nature of drug addiction.”I did a gig in a homeless shelter. It was written about one of the women that I met there: her journey and her story,” says Ed. “I was 18 at the time. I had only lived in London for two years, so I had never seen the dark underbelly of it and obviously there are quite dark, disturbing elements to every major city, and I witnessed quite a few of them that day.”

Now, his first full album + has been out for awhile, yet Ed maintains that its success hasn’t added to the pressure he feels to continue making great music and touring the world. “It puts more pressure on my label,” he says. “I’m good because I know I’m always going to make music.” 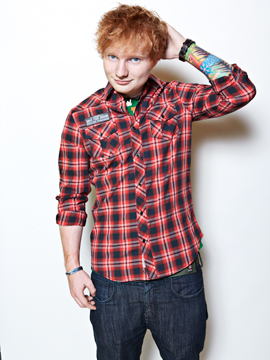 But he is looking to constantly improve his art, and a part of that is increasing the number of people who are exposed to it. “I look at other musicians that are in the same vein as me and wonder why I’m not doing as well and work to do as well. My benchmark at the moment is someone like Adele, who is just a phenomenon,” Ed says. “If I didn’t sell as many records as Adele, I’m not going to cry about it, but if I sell half as many, I’ll be happy.”

Though he still looks up to other musicians as role models, Ed Sheeran is now a source of inspiration for millions, much like James Morrison was for him. Yet, despite his fame, Ed still remains true to himself: singing his truth through music and living in the moment, appreciating every part of the process.

During his show in Toronto, at the beginning of his first headlining tour in Canada, he couldn’t get over the size of the crowd that had gathered to watch him play. He repeated his humble gratitude many times throughout the night to responses of screaming and then complete silence as his fans quieted down to soak up the slower ballads.

“It’s quite a shock to adjust to having people looking up to you,” Ed says. “The most important thing to do in any situation is to be yourself. No one can do you better than you, so be happy about it and realize that you’re individually important.”

Never had time to…
Do homework.

Only paid attention to…
My guitar.

Listened to music like…
Damien Rice, The Offspring, Linkin Park and Green Day

Dreamed about…
What I’m doing at the moment. I’m glad it worked out. 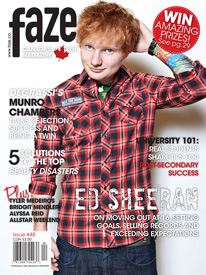 On the cover, Ed is wearing a Projek Raw plaid shirt, $55.
On these pages, Ed is also wearing a Numero blazer/hoodie, $139.