Our review and a chat with one of the stars, Katie Chang 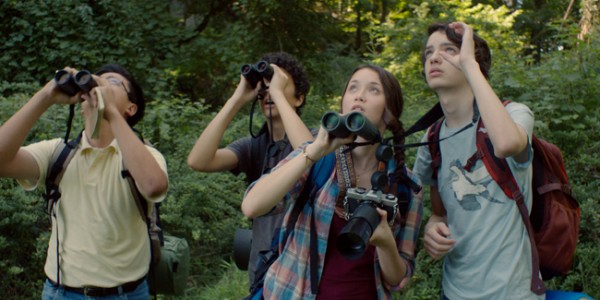 Kodi Smit-McPhee (The Road, Let Me In), Ben Kinglsey (Gandhi, Ender’s Game) and Katie Chang (The Bling Ring) star in this coming-of-age comedy about a group of teens who are dedicated bird watchers. Yes, you read that correctly. Bird watchers. High-action drama ensues.

For real, though, this film takes you along the journey of David Portnoy (Kodi Smit-McPhee), who lost his mother not too long ago. She was a bird watcher (sorry, the correct term is “birder”) and he is adamant that he must follow in her footsteps. So, when he thinks he spots the supposedly extinct Labrador Duck, he sets out on a mission with his best friends to get photographic evidence of his discovery. Ellen Reeves (Katie Chang) insists on tagging along, much to the surprise oh, well, everyone (a GIRL?!?).

Nothing, not competing birders like Lawrence Konrad (Ben Kingsley), nor car theft, nor his father’s impending wedding is enough to hold him back from finding that bird again. 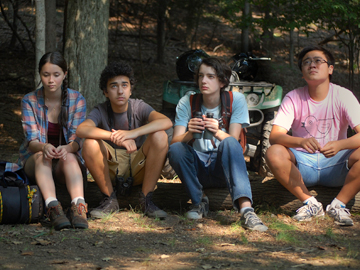 Friendship: Though by most people’s standards it’s not a journey of epic proportions, but the test is still the same. How many rules would you break to help your best friend realize his/her dream?

Comedy: BFF Timmy Barsky thinks he’s a ladies’ man. Club president Michael Chen thinks leading the birder group is as serious as leading the UN during wartime. The dynamic between these guys makes for a few good laughs.

Romance: Group of all guys—with binocular obsessions, no less. Enter girl. What did you think was going to happen?

We caught up with Katie Chang, who plays Ellen in A Birder Watcher’s Guide to Everything (you may remember her as the epic partier and celeb burglar in The Bling Ring). 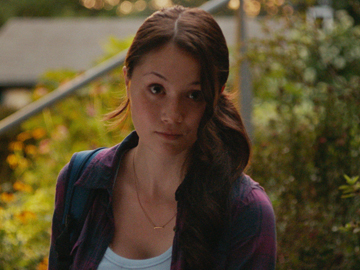 What was the best part about being on set for this film?

I had just done The Bling Ring a couple of months before and that was a pretty crazy shoot with a lot of wardrobe and sets and just a lot of hype and craziness. So to go from that to a really small, sweet film was really humbling. It was really great to work with people who were my age and still going to school.

Your character in The Bling Ring was so different from you personally, but the character you play in this movie is a lot closer. Do you like roles that are more similar or ones that are completely opposite to Katie in real life?

I don’t really have a preference. I’m just lucky to get any role and to play whatever type of character comes my way. It is fun to play someone who is totally different from you, but with that comes challenges too. It can be, not easier, but more natural to play a character that’s closer to you.

What was it like working with Oscar-winner Ben Kingsley?

He was just incredible. We called him Sir Ben on set. We had already shot for three weeks [when he arrived]. It was me and three other boys and we were goofing around all day, jumping around, pranking each other. Then this amazing actor comes on set and then everybody gets very serious. It was kind of funny. Working with him, you can tell that his process for creating his character is very intense. It was very inspiring to me.

You are a working actor who is also going to school. How do you balance that?

I feel really lucky. I have cool people who represent me, who are really supportive of me going to school and I have parents who are supportive as well, then also working at the same time. So the balance comes from having all of these great people excited to see what I’m doing, no matter what I chose. But it gets hard sometimes. It’s hard to prioritize. If I’m in school for seven months, I start getting that itch. I want to go out and audition and act. The best way to keep that balance is to just keep reminding myself that I’m 18, and I have a lot of time to do all of this stuff. Just kind of mentally re-prioritizing.

What are studying at Columbia University?

I’m potentially going to be majoring in film. I’ve taken two classes now, in the film program at Columbia, and I absolutely love it. I didn’t want to major in film at first. I wanted it to be completely different from acting, because the plan is to have acting be the rest of my life, so I wanted to have some other knowledge—which I definitely am getting. But nothing gets me more passionate than those film classes, so I gave up and realized that is what I would end up studying.

When did you first know you wanted to pursue acting as a career?

Definitely pretty young. I was about nine. I always loved being in community plays, showing off for my parents’ friends when they came over. I never really realized that the things I did when I was a kid was actually acting. My dad bought me a Barbie camcorder, so I would film music videos and tv shows with my Barbies. That was playing to me. I never realized that was me loving acting.

What advice would you give to young, aspiring actor?

Everyone’s path to becoming an actor is sort of unusual. The number one thing that I would say is to do your training. Take acting classes, as many as you can. And study, study, study. Also start writing: scripts, character descriptions. Read books about acting. Anything you can get your hands on to start being creative as soon as possible.

A BIRDER’S GUIDE TO EVERYTHING is now available to own.
Check it out!