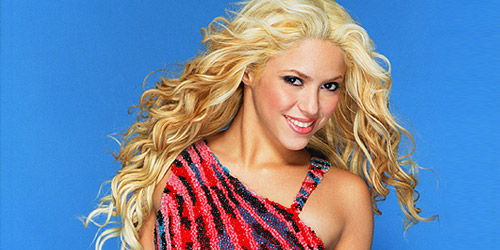 “I am a fusion. That’s my persona. I’m a fusion between black and white, between pop and rock, between cultures—between my Lebanese father and my mother’s Spanish blood, the Colombian folklore and Arab dance I love and American music.” 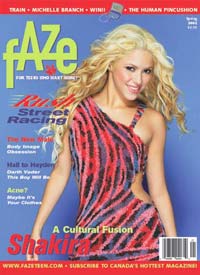 Shakira has ushered us into the brave new world of her music; a sound often described as a refreshing blast of off-center rock that is fused together with her native Arabic and Latin beats.

Born Shakira Isabel Mebarak Ripoll in the coastal city of Barranquilla, Colombia, she is the youngest of eight children. Her name, translated from Arabic means, “woman full of grace.”

At the age of eight she started writing her own songs, in Spanish, and began winning local and national talent contests by the age of ten. Now, with five released albums, Shakira has won two Latin Grammys, one Grammy, and was named the Latin Female Artist of the Year at the 1998 World Music Awards. She was also designated the official goodwill ambassador by the Colombian government and granted an audience in the Vatican by the Pope.

However, as she pursued her dreams she was constantly challenged to make decisions that would define who she was and who she would become.

Her first album, Magia (Magic), was composed of songs she wrote as a child, and was released when the rising star turned thirteen years old. Two years later, she released Peligro (Danger). Shakira then took a break from music, graduated from high school and then released another album, Pies Descalzos (Barefeet), at the age of sixteen. The record was a smashing success, selling close to four million copies internationally. The budding artist toured for almost two solid years, performing to audiences worldwide.

“Shakira’s music has a personal stamp that doesn’t look like anyone else’s.”

Shakira had always written her own music, but despite her success, her label wanted her to explore more commercial avenues and to stick to the light pop format of music for her next record.

However, in defending who she was, Shakira refused to abandon her cultural influences and insisted on recording her very own brand of music. Laced with Mexican mariachi, Middle Eastern grooves, and soulful Spanish lyrics, Donde Estan los Ladrones? (Where are the Thieves?), reached new heights. The culturally rich album reached the No.1 spot
on Billboard’s Latin 50. 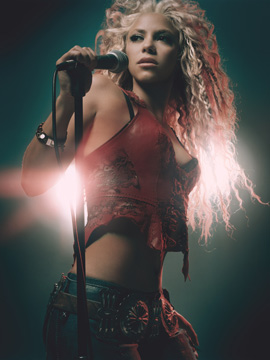 Acknowledging her achievements, countryman and Nobel Prize winning author, Gabriel Garcia Marques says, “Shakira’s music has a personal stamp that doesn’t look like anyone else’s and no one can sing or dance like her, at whatever age, with such an innocent sensuality, one that seems to be of her own invention.”

But there was still more to be done. Shakira was determined to introduce her unique sound, style and culture to the English-speaking world. However, writing songs in English was a challenge. “I prayed and asked God to send me a good song today, and I remember I started writing the song [Objection] a couple of hours after. I wrote the music and lyrics at the same time, and when that happens it’s really magical to me.” With the completion of this first song, Shakira knew that she could write ten more, so she packed up her loved ones and set up portable studios in rural Uruguay. “I had to find a way to express my ideas and my feelings, my day-to-day stories in English. So I bought a couple of rhyming dictionaries, read poetry, and authors like Leonard Cohen and Walt Whitman,” she said.

In 2001, the yodeling diva released her breakthrough English language album, Laundry Service, which debuted at number 15 on the Billboard Top 200. Laundry
Service has been proclaimed as extraordinary work, as Shakira translates her Latin American sensibility into a new language. 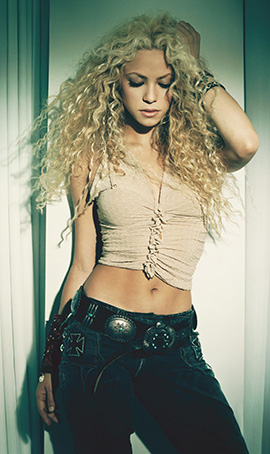 “…because my father is of 100% Lebanese descent, I am devoted to Arabic tastes and sounds.”

It is clear that this budding North American star is proud to become a cultural ambassador, incorporating her heritage into her public life as a singer. “I was born and raised in Colombia, but I listened to bands like Led Zeppelin, the Cure, the Police, the Beatles and Nirvana,” she says. “I was so in love with that rock sound but at the same time because my father is of 100% Lebanese descent, I am devoted to Arabic tastes and sounds.”

However, few performers have been able to truly retain their unique styles once they are exposed to the wrath of the American pop world. The brutality of the market often sends foreign stars like Robbie Williams back from where they came from. Or, performers end up changing their image to fit the popular American “look”.

Many see Shakira’s music as a strong cultural statement. There are some, however, who have called the Colombian native a sellout—an overly ambitious diva that dyed her naturally dark locks blonde in order to fit into the U.S. market.

“I plan to keep on being the same artist, with the same musical language, just in a different spoken language.”

“I know my Latin people find this difficult,” the singer admits. “And I want my success to be good news to my country. But it’s typical that when you see somebody who is so close to you growing, you feel that the very word “growing” is synonymous with leaving,” and adds, “my hair is a coincidence. I dyed it more than two and a half years ago.”

“I plan to keep on being the same artist, with the same musical language, just in a different spoken language,” says Shakira. “It’s all still coming from my real feelings, my real life experiences.”

She hopes that Laundry Service, helps to convince skeptics that her career can be spread from one country to the next, and translated from one tongue to another without changing its essence. “If you check the subject of my songs, most of them talk about my own experiences and feelings and what I was actually going through in my life,” she said.

By weaving her cultural heritage into the fabric of her music, Shakira has introduced her audience to a new world—one she is proud of as it defines who she is.