This “Pretty Little Liars” star took her kitchen vision board and made it her reality. 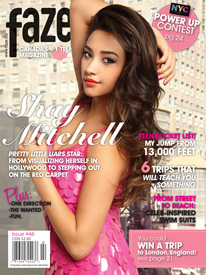 “Scrunchies may come back. Mark my words,” says Shay, only half-joking as she elicits laughter from the room.

We’re nestled on the couch for some girl talk, discussing fashion do’s and don’ts, after wrapping up our cover shoot in our suite at the Andaz Hotel in New York City. “As long as it’s styled right, there isn’t anything that really scares me.”

If anyone could pull off that iconic 90’s hair tie—and perhaps start its comeback— it would indeed be fearless Shay Mitchell. Okay, okay, so wearing a scrunchie may not be the ultimate act of bravery, but her positive “anything is possible” attitude is definitely admirable. 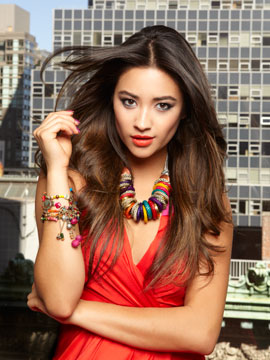 It’s easy to assume that the reason Shay exudes such optimism is because of her current status of success as part of the quartet of girls on the hit show Pretty Little Liars. Shay is shining in her role as Emily Fields on the series—which is now in its third season—as her character tries to sift her way through the murder mystery/high school drama, which gets more complex each week.

The show follows the lives of four best friends (Aria, Spencer, Hannah and Emily) one year after their queen bee, Alison, goes missing. While battling their share of school, parental and relationship problems, the girls also struggle with threatening messages from a mysterious “A”—who seems to know all of their secrets. Their friendships are constantly being pulled together and then ripped apart as they try to deal with everything. The show has garnered nominations and awards, while audiences clamour for more episodes.

But although she’s in the midst of living her dream, Shay’s present stardom is not the reason for her sunny outlook. According to her, it’s more like her rising star is proof that dreams are everything—not the sometimes random pictures that we see in our sleep, but detailed hopes that we have for the future.

“We’d always have night chats,” Shay says, recollecting on the conversations she had with her father when she was younger. “He said, ‘The world’s your oyster. You can make it happen if you believe in it.’ I really went to sleep on that and I’ve always believed that ever since.” 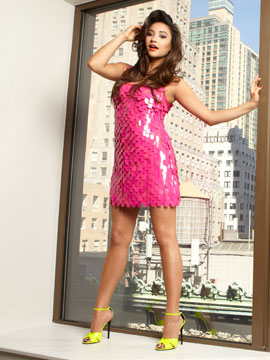 Shay could have left her notions of being a Hollywood actress in the fantasy world, but instead she chose to actively visualize her dreams in her waking hours. “I had an inspiration board when I was living in Toronto,” says Shay. “I had a board in my kitchen with the Hollywood sign on it, different talk shows, magazine covers and a Teen Choice surfboard. Literally, like a year and a half later, I was going to the Teen Choice Awards and our show won.”

It’s a surreal thing to look back on, but the idea of picturing the future you want
makes sense. Olympic athletes do it all the time as a method of mental training called Creative Visualization and it has been proven to produce better results.

But, of course, it’s just the first step in making things happen. For Shay, it started with her parents’ encouragements. Although they believed in her abilities whole heartedly, it was up to Shay to make her dreams come true. 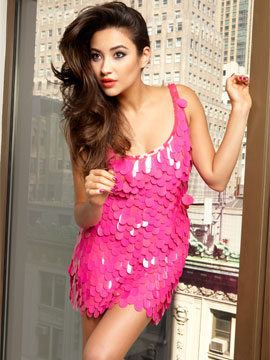 After starting out as a model, Shay found that she was passionate about being in front of the camera, but wanted to do more. “I wanted to play a different character,” she says. “When I was [travelling] and homesick, I’d put on a movie and it would take me away. I loved that it could reach so many different people, this one movie.”

So, after coming back from her travels as a model, Shay took a couple of acting
classes. “I fell in love with it,” she says. But the career was about more than just what was on the screen; it was about positively affecting the people who watched that screen. “Being able to play the character that I do on Pretty Little Liars, it changed a lot more lives than I could have ever expected. For a lot of other people to really look up to my character, that is amazing. I’m not only entertaining people by being on this great show; I’m also helping them be more who they are.”

The show, and Shay herself, has been praised for the moving and true to life portrayal of Emily’s character as she struggles to accept her sexual orientation.** “I didn’t want to over exaggerate it, but still I wanted to show just how difficult it would be,” Shay says, remembering how she processed Emily’s coming out scene.

While PLL treated that storyline with tasteful importance, they also made sure it was not Emily’s only defining aspect. “A lot of girls write to me and say, ‘Thank you! You still wear lip gloss, you still dress up, you’re still girly—and you like girls. I love the fact that you’re playing this character and you’ve helped me prove that I don’t have to be stereotyped.” 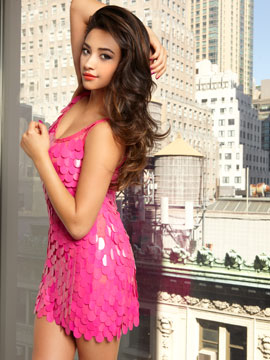 The letters are Shay’s confirmation that her role is making a difference in the lives of her viewers. “They think that the character I play had a huge weight lifted off of her after coming out. They wanted that same feeling. And then they did it.”

Just like Emily, Shay has had her share of struggles while pursuing her dreams. But she’s learned to appreciate the bad with the good. “I love the struggles. They make you a lot stronger.”

Shay rocked our cover shoot—not just with her stellar modeling skills, but by bonding with our team through Instagram photos, inspirational chats and scrunchie jokes. “This is the greatest! Who doesn’t love photo shoots?” she says afterwards. “I love meeting everybody and getting to work with a bunch
of people to create something really cool.”

Shay’s dream-come-true journey proves that you have to visualize what you want. In order to get there, you have to first picture it perfect. But it may not turn out exactly the way you imagined it: it could be better. “I’m living my dream,” says Shay. “It’s exactly what I’ve always wanted, so I don’t have anything to complain about.”

**PLL has been nominated twice for GLAAD Media Awards, presented by the Gay & Lesbian Alliance Against Defamation.

Don’t forget to check out our behind the scenes video and photos from our NYC shoot with Shay Mitchell! Click here. 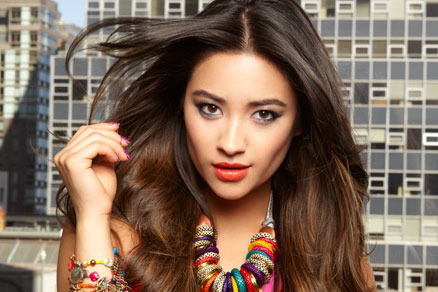 BONUS: A Shay Mitchell tells us her best place for…

Going on a dream date: Paris

Regaining focus: anywhere in a garden

A PLL bonding session: on set

Laughing as loudly as possible: anywhere with my friends

Singing at the top of your lungs: In my car, hands down. If I had a hidden camera in my car, that would be disastrous.

Are You Looking After Your Body? The Essential Steps to a Healthier Future