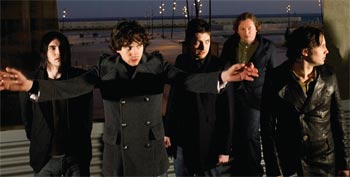 Even after a decade of making music, it can still be overwhelming when a band levels up from indie scenesters to rock star status, as Snow Patrol did after the release of Final Straw and their hit single “Run”. Which explains why, after a whirlwind year of touring (including a gig as the opening band for U2’s Vertigo Tour), Snow Patrol was eager to isolate themselves in a little cottage in a seaside town in Ireland to write their new album, Eyes Open.

The rocky cliffs and crashing waves inspired them to create a self-described “epic” album, with a sound that’s “bigger, bolder, and more confident” than anything they’ve done before. “We’re a lot more of a rock band than people would have thought after hearing Final Straw,” says guitarist Nathan Connolly. “We wanted to counter that on this album.”

Connolly lets loose with heavy guitar riffs on the singles “You’re All I Have” and “Hands Open”. But it’s clear that fans can’t get enough of Snow Patrol’s heartfelt ballads; “Chasing Cars”, the track that Gary Lightbody calls the most pure and open love song he’s ever written, became an instant hit for the band after it stole the scene in the season finale of Grey’s Anatomy.

The band: Snow Patrol (along with bands including Belle & Sebastian, Arab Strap, Teenage Fanclub, and Mogwai) has turned ears toward Scotland and secured Glasgow as a hotspot on the international music scene.

Right now: Plans to tour North America this summer were postponed while Gary Lightbody was under doctor’s orders to rest his voice. Now that Gary’s on the mend, new North American dates for their tour include stops in Montreal (September 12th), Toronto (on the 13th), and Vancouver (on the 21st).