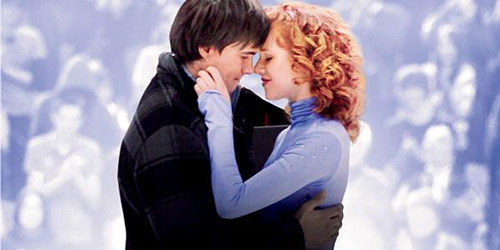 Take your chance. Find your strength. Live your dream.

Faze on the Halifax set of the new movie ICE CASTLES.

A remake of the original movie from the 70s, Ice Castles is a classic romance about a couple finding their way back to each other and to their broken dreams. Alex “Lexie” Winston (American figure skater Taylor Firth) is an underdog, fighting up the ladder of skating superstardom—leaving her boyfriend, Nick (Rob Mayes, American Mall), and her previous life behind. But all of the hard work and sacrifice seems to add to nothing when a tragic accident leaves her blind and without hope for the future. Taking a step back from the skating world, Lexie starts to succumb to self-pity, but Nick returns and with his help, she dares to hope for her dreams again. 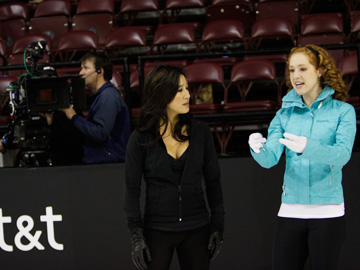 Faze was on the set of the sport-romance as they filmed in Halifax, N.S., to chat with the cast and get a first-hand look behind the scenes.

It was a friendly atmosphere, the cast and crew all clearly settling in to their surrogate-family roles with one another—but when the cameras were rolling and there was work to be done, this new-found family set their noses to the grindstone.

But on some downtime, cast members Taylor Firth and Rob Ma   yes sat down with me to talk about their experience making movie magic.

FAZE: Taylor, how did you find about the role in this movie?

TAYLOR: We found a spam email asking me to try out for Ice Castles and I was totally pumped (I had never done any other acting before). I sent an audition tape and got a call-back and sent another audition tape. Then we went to Toronto for an on-ice audition, and [later] got a call saying I got the part!

FAZE: What was your biggest challenge during filming?

FAZE: The film is very definitely a romance—what was it like being romantic with your co-star Rob?

TAYLOR: At first, I found it extremely intimidated because he is a very handsome guy, and I found it very intimidating. And I was very nervous because there were 50 people on set watching me. But you get comfortable with it and obviously our relationship has—this sounds kind of weird—but we haven’t really known any different than being on set with a lot of people watching, so you do get used to it.

FAZE: Which takes more out of you, skating in real life or on a movie set? 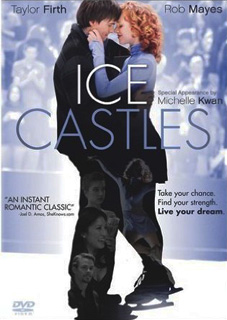 FAZE: Rob, you originally started out in the military—what brought you to acting?

ROB: When I was in the military, I really just shunned the arts because I felt like I had to be this warrior. Warriors don’t act or do artistic things. I just realized the importance of art and expression, in a place where expression is looked down upon.

FAZE: What do you think the atmosphere is like on the set of Ice Castles?

ROB: There is a family feel… there is history in our characters and everyone involved is so open and has such an honest energy.

FAZE: Have you been helping Taylor out with acting advice?

ROB: She helps me a bit when it comes to skating and I really don’t need to give her much help when it comes to acting. She really has an amazing energy. When you watch her skating, she is just so focused and present, but it’s never put on. She brings that to her work and it’s really quite touching and powerful.

FAZE: What is your favourite thing about being on a set like this?

ROB: I love to skate and I love to play hockey, despite the fact that I am not very good at it. So I’m enjoying that quite a lot. [Also] I very much so resonated with the script when I first read it; it’s this very honest love story, and we’re making it. It’s powerful and fulfilling. 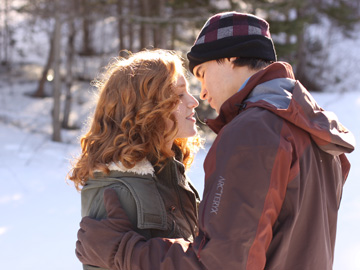 Rob Mayes and Taylor Firth keep each other warm while they skate.