How MuchMusic VJ, Lauren Toyota turned passion and perfectionism into her dream job.

Your high school probably doesn’t offer a program called “VJ 101,” so if you want to work at MuchMusic, you might have to find your own way.

Much’s, Lauren Toyota certainly did. Her journey to the front of the camera wasn’t a typical one. But, she started the way many VJs start: watching Much as a child. “Basically, when I was growing up as a teenager, MuchMusic was all we had. I didn’t grow up in the internet age, the way it is now. So MuchMusic was my source to learn about everything,” says Lauren. 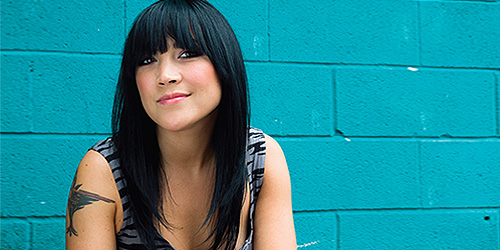 Like many other young fans, she says she looked up to VJs and wanted to be just like them. “I just looked at them and saw them being themselves and I wanted to be that person when I grew up, for other people.”

By the ninth grade, she was convinced she would work somewhere on the business side of music.  She even went as far as earning her diploma in Music Business Administration from Durham College. Then, when the chance popped up, she chased her childhood dream all the way from Toronto to Vancouver. “I saw a posting for a host job in Vancouver at a show. It was on MTV Canada and I made a homemade demo tape with someone and then sent it in. I just tried to show my personality and who I really was in this one to two minute video.”

Soon after the call came in, Lauren packed her bags and moved to Vancouver. “I moved out to Vancouver on a whim, kind of. For what started as basically a one day a week job. It was like nothing. It was like, we’ll pay you this small amount; come in one day a week and we’ll just see how it goes. So, I just took a shot because I was thinking, this is the only shot I’m ever going to have,” says Lauren.

Part of her success comes from having a look and personality that producers are always looking for. But she also has a relentless work ethic and sometimes puts hours of research into an 8-minute interview. “I need to be overly prepared and overly researched to feel confident. To be able to sit beside that person and know that I’m never going to be trapped in a place where I’m like, I don’t know what to ask.”

She is also her own worst critic and a tireless perfectionist. She watches her own tapes and is constantly looking for ways she can improve. “That was a piece of advice that my colleague at the first show I worked on gave me. He said, ‘It’s gonna suck, and you’re gonna be really uncomfortable, but it’s the only way you’re going to learn how to get better.’”

Lauren is definitely an inspiration for anyone who wants to chase their dream. She’s worked her way from the shy girl in high school to one of Canada’s most engaging television personalities. When asked if she has any advice for any would-be VJs, she says be direct and go after exactly what you want. “You have to make it happen for yourself. You have to figure out what it is you want and figure out the steps to get there.”

And, like many successful people, she’s hungry for more. She may have the dream job, interviewing everyone from Kanye to Lady Gaga, but she refuses to rest.

“People ask me, when are you going to take a break? Do you ever go on vacation? And I say, No. I don’t. Because I couldn’t tell you exactly where I want to be in five years, so I’ll have to somehow figure it out along the way. But I want this to be bigger.” 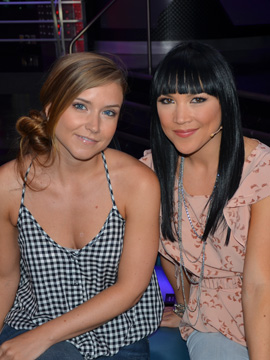 Most awkward moment on TV:
Check out my “Jordan Knightmare” on YouTube. You’ll see.

Song that reminds you most of high school:
“Another Sunday” by I Mother Earth

Highlight of the 2011 MMVAs:
Standing with Classified and Lady Gaga, offstage.