Prepare for one intense, and empowering, workout when taking on Muay Thai, Thailand’s national sport 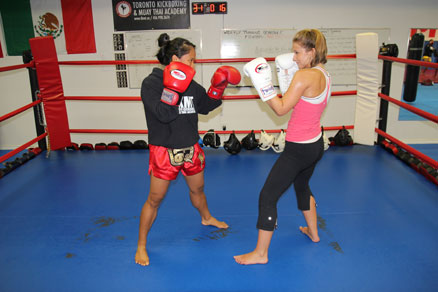 One of the best parts about my job is that I get the opportunity to do things that scare me—and I don’t mean going to see an advance screening of the latest horror flick. I’m talking about those experiences that force you into new territory where you can face an irrational fear and develop the strength of mind to conquer it. I’ve successfully gone hang gliding, launched myself off a cliff, come face to face with a hungry alligator and survived the night in a haunted plantation house, just to name a few.

So, when the opportunity came around to explore the world of Muay Thai, I jumped at it. Was I scared? A little. Intimidated? Definitely. Especially when my instructor, Levi Cristobal (2011 Canadian National Women’s 50kg Champion), welcomes me to the Toronto Kickboxing and Muay Thai Academy (TKMT) by inviting me into the ring. With the theme from Rocky playing in my mind, I tentatively slip through the gaps in the side barrier and sit in the middle to chat with Levi before getting started.

As the national sport of Thailand, Muay Thai (also known as Thai boxing) is a type of kickboxing commonly referred to as an “art of eight weapons” because it uses two fists, two elbows, two knees and two feet/shins. The sport is said to date back to at least 1767, developing out of Thai military arts. In 1930, many rules and regulations were added, such as boxing gloves, rounds and weight classes. Today, the training techniques are still used in the Thai military and have also become popular with the U.S. Navy SEALs, North American police forces and CIA officers as a way to stay in great shape, both physically and mentally.

The TKMT downtown Toronto location is simply laid out with mats, a section of mirrored wall and a sparring ring. As we sit in the ring, Levi explains that she never intended to be a Thai boxer and wouldn’t have been the type to fight.

“Before Muay Thai, my friend and I were walking down the street and got attacked by a guy. I couldn’t really defend her. She got punched,” she says. “I was really scared to walk down the street after that.”

Even so, when Levi first started in Muay Thai, it wasn’t to learn self-defence. She was accompanying a friend who was trying to get fit, while also pursuing other sports. “I did basketball in high school and even some in college, but they’re not the same. Basketball is intense training, but Muay Thai is way more intense.” 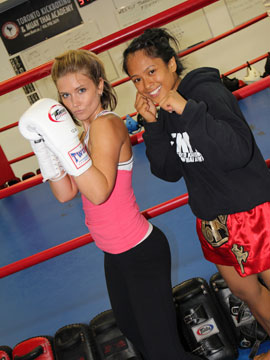 After every class, Levi found herself feeling great, both physically and mentally. “It’s made me more confident,” she says. “My attitude is definitely different towards life.”

With intense workouts, Levi quickly became more serious and is now one of the fighters at the gym. She’s competed in sanctioned fights in Cambridge, Montreal and Germany. “I lost [the Germany fight], but it was a really good experience.”

What an experience indeed. The hour-and-a-half beginner class includes stretching, skipping and conditioning— and this is all before getting into any technique! Levi then takes me through all the basics: the proper stance, how to punch and(left/right jab and cross), how to kick (which involves a body/foot pivot that takes a little bit to get used to). Next, I get to lace up my boxing gloves and put my moves to the test opposite Levi, who wears pads during this process—not likely that I could do much damage to an experienced fighter, but still: safety first.

We practise the moves in combination until all of my strength is zapped, and then end off with more conditioning. After just one class, it is easy to see why these athletes are in such great shape.”I really like that you can work out and learn to defend yourself at the same time,” says Levi. “We teach defence and offence. So you could just avoid a fight and then walk away.” 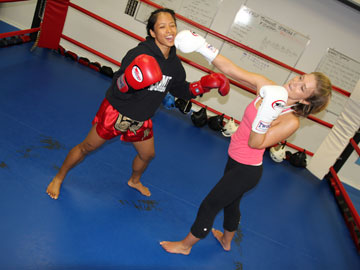 But that offence aspect leads to some misconceptions about the sport. People can be intimidated about starting out in Muay Thai, thinking that they will have to fight someone and might get hurt. Yet most who practise the sport are not doing so as fighters—they are purely interested in fitness. Thai pads are used while training with a partner and there are separate classes for sparring fighters.

Another misconception is that it’s not for females. Wrong! TKMT boasts a 50/50 ratio of men to women at the gym, one of the highest ratios for a combat fitness gym. I never thought I’d ever strap myself into some boxing gloves opposite one of the best fighters in the country, but it feels great. It’s a larger-than-life moment and, most importantly, totally empowering.

So, when you schedule your own very first Muay Thai class, be prepared to work hard, sweat lots and wake up incredibly sore the next morning—but eager for the next jab-cross-kick!