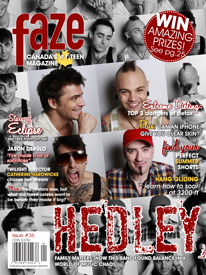 I can’t lie. I have been to countless interviews that  I have thoroughly enjoyed, yet I still get nervous. So, as I sit in front of the famous Canadian band, Hedley—maybe you’ve heard of them?—I try to calm my nerves by preparing myself for what they’re going to be like. Videos on YouTube and crazy/fun songs like “Cha-Ching” make me fairly confident that they will be loud, outgoing and might even pull a prank or two.

But my expectations are met with an interesting discovery. Yes, these guys know how to joke around—the interview led to talk of flashy, one-piece unitards, dance troupes, their favourite colours (a tie between aquamarine and puce, if you must know) and even a quick rendition by Jacob of The Little Mermaid’s “Under The Sea” (a hilarious time that doesn’t translate well onto the blank page). But I found myself pleasantly surprised by the more serious side of the band. And by how quickly they could flip between the two. 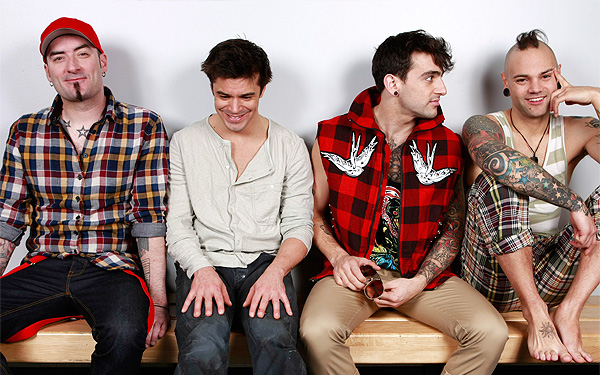 In the grand tradition of Ms. Carrie Bradshaw (I can just see her poised above the keys on her laptop), I guess you could say it got me thinking. In a world that insists on brands and labels so early on in our lives, separating everyone into distinct categories—punk, prep, rocker, jock—do we miss out on the exploration of what’s beyond those boundaries? If we become what the world has labelled us, what are we missing? Is it possible to be a little of this, and a little of that?

Since the band’s first record, Hedley, the guys have been labelled by media as “pop-punk”—a brand that means very little to them in terms of their music, especially now. They have resisted the urge to become comfortable in the genre others stamped them with in the business, and chose instead to push through the label, exploring other styles of music.

“I think it’s allowed us the flexibility when we write to explore different types of music throughout one consistent record, and the tie that binds the record is often the style of singing that remains quite often the same,” says Jacob Hoggard, the band’s lead vocalist. “We definitely infuse a little more reggae in certain songs, then all of a sudden go a little more gospel in other songs, or straight up ‘pop-punk attitude’ in other ones.”

“That’s badittude,” drummer Chris Crippin chimes in and they both start laughing. 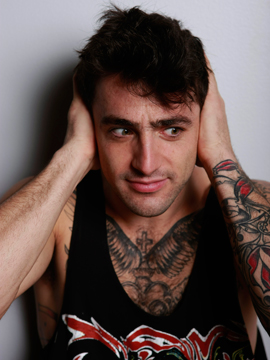 Most people first remember seeing Jacob as a contestant on the second season of Canadian Idol, where he placed third. Known for his jokester antics—including the flashy unitard—Jacob garnered much attention on the show, and people were just waiting to see what he would do next. They wouldn’t be disappointed.

Jacob’s previous band (also named Hedley) shared a manager with another act, which included Chris, guitarist Dave Rosin, and bassist Tommy Mac. Simply put, “They were looking for a singer and I was looking for a band.”

They met, jammed a little and immediately started writing their first song together, “Street Fight,” which ended up on their five-song demo for Universal Records, helped to secure them a record deal and landed on the first album.

Now onto their third album, The Show Must Go, the band continues to draw in more and more devoted fans who appreciate the level of balance in their songs, giving them something for every emotional state. The record takes you through fun and playful hits (with a hint of satire) like “Cha-Ching,” darker refrains like “Don’t Talk To Strangers,” and powerfully emotional ballads like “Perfect,” and—my personal favourite—“The Sweater Song.”

With this most recent record, Hedley has clearly also learned how important it is to keep a fine balance between their personal and performing lives.

“What The Show Must Go means is that at a certain point in my life, I realized that my personal life and my performing life started to blend in together, and there was no real fine line anymore between private and performer,” Jacob explains. “[I had to] remove some pretty cancerous behaviours from my life and make some very radical changes to start establishing those two as mutually exclusive parts of me—always being able to acknowledge the fact that this is just work and this is my real human life. I am a human being; I am not a parody of myself.” 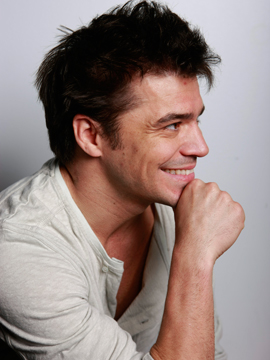 This matter of balance is no easy task for anyone in an artistic field; in order for their music to be real and honest, it needs to come from a place of personal experience. So, in essence, many aspects of their lives and their personal identities are being performed on the stage, night after night, and yet in order to stay grounded, all members of the band have to take a step back and recognize that their stage life is not the whole picture.

“When you start expecting all the people in your life to treat you like you’re the person on stage, where people are screaming and really appreciative and cheering and staring at you,” says Chris, “it can ruin everything. So you absolutely have to walk away.”

And all the guys seem totally comfortable and at ease with who they are as people, as artists, during our chat before the show; but they also come alive, in a very different way, when they hit the stage and become engrossed in performing for hordes of enthusiastic fans. They live in a balance between both worlds, and thus avoid what they have dubbed the “silly rock star mentality.”
Part of what keeps them balanced, both on and off the record, is how the group functions as a whole. As Chris puts it, “None of the guys in this group, or our work family, are afraid of emotions or of being themselves.” Being in touch with all aspects of their identities—not just the prankster sides you see on TV—not only makes them better artists, but better people.

“As much as we are just kind of normal guys that like to have a lot of fun and goof off and make fun of each other and other people, there is a side to us that is real and does feel feelings, so to speak,” says Jacob. “And it’s always been important for us to keep that balanced on the record. It’s not just an edgy, fun lovin’ record, but there’s an aspect to it that’s definitely real, and someone can relate to it on an emotional level.”

These “normal guys” credit their family-oriented inner workings as a key to success. Speaking warmly about every member of their crew, Jacob tells Faze, “No one of us did all of this, not one of us could. We’re a very, very strong unit; not just the four of us as a band—which is, in essence, the core of the earth in Hedley’s globe—but there are layers and layers and layers of people that we work with.” 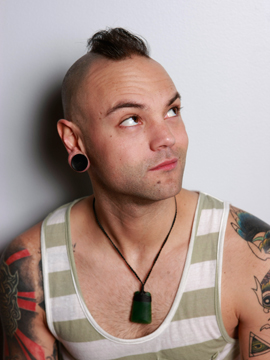 “We never realized that this is the way that it should be done, it’s just that we’re all family men,” adds Chris.

Starting off as just four guys and one crew member, the Hedley family has grown gradually over the years, now taking more than 23 people on the road with them. But such growth has not changed the way they view success. “We could all go there—to that mystical, wonderful place of legacy—together, but never alone,” says Chris.

Keeping a family atmosphere—with all the humour, hugs and screaming matches that go along with it—has allowed the band to stay level-headed and balanced about all the success they’ve had so far in their careers. Knowing how many hopeful bands are out there, Jacob tries to take everything in humble stride. “I am absolutely positive that I’m just a normal guy, who is really lucky to be here, and is trying his best to write songs.”

Lucky, indeed. I look around at the nice dressing room, complete with couches, changes of clothes and a fully stocked refreshment table. I point out to the guys that they seem almost like kings of the castle at this venue.

“Well, this is the nicest it’s been, and we’re taking to it really quickly,” Chris says, smiling.

“We’ve done every other way. We’ve had dressing rooms that were actually janitors’ closets,” Jacob interjects. “We’ve followed a bus around in a van. We’ve done it a bunch of times. It’s been a natural progression and I’m glad that we’ve seen every other angle of it before we’ve gotten to this point, so as to really respect every dimension.”

The videographer aims his camera alarmingly close on my left side; my trusty recorder picks 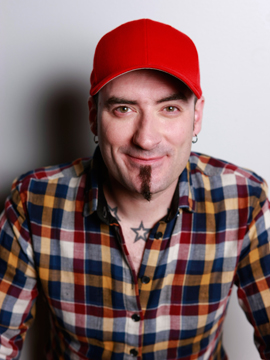 up every sound to my right; the black, leather couch in front of me is loaded with some of the most talented guys in the nation—somewhere between all of this pressure to perform the perfect interview and get the story that will wow the masses, I find myself smiling.

It’s all about the journey, and not the destination; the process of self-discovery, and not the label attached to the findings. The world may see a “pop-punk” band selling records by the millions, but they see a family working together towards a common goal. Their natural progression from past to present has taught them the necessary skills and life experience that makes their music so real, so alive, so appealing.

But the journey doesn’t end here; Hedley is still looking forward, their sights set on the next step. “We have so much more to do and there’s so much further to go with it,” says Jacob. “And it’s important for us that our gaze has always been turned upwards.” 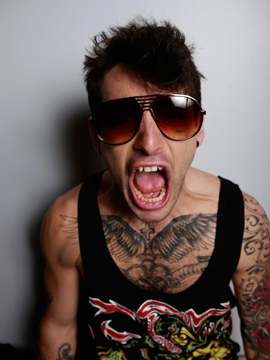 FAZE: What was it like being a part of Young Artists for Haiti and recording “Wavin’ Flag”?

JACOB: We’ve all been involved with Free the Children for awhile now. We were really lucky to be involved with the song. We know Bob Ezrin, who produced it, and hadn’t worked with him before, so that was a first. Free the Children is a main partner in the Young Artists for Haiti movement and actually, after this tour, we’re going to Africa with them.

FAZE: Where in Africa?

JACOB: Kenya. We’re really excited. We’re going to spend 10 days there, bringing our guitars and hammers…or both: All in one. One in the same. [laughs] Just because of the relationships with them and through our label as well. And what an opportunity that was—not just to work with a really great producer like that, but also to work with a bunch of really great Canadian artists.

FAZE: So when you recorded that did you know it would be that one specific line?

JACOB: I sang the whole verse and I think everybody who got a line or two sang a whole verse, and then they just took everyone’s favourite performances. I wanted, obviously, Drake’s rap. I tried. “Hey guys, I brought my own rap in, if you want to hear me do a number here.” Didn’t go too far.

FAZE: Have you ever done rap with the band?

JACOB: No, I don’t think we need to go in that direction. I think there are a few different directions we could take the band that resemble a hangman’s noose. [laughs]