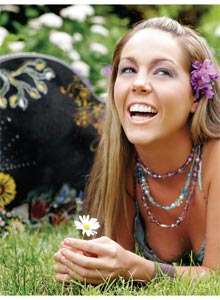 Zoë Bentley is ready to take the world by storm with her blend of what she calls “acoustic soul” and “metaphorical rock ambience”. After returning from her second cross-Canada tour to promote her debut CD, Stride, this versatile singer/songwriter is more motivated than ever to make her way onto the scene.

But she’s not doing it for fame or money. Far from possessing a starlet’s disposition, this downhome up-and-comer just wants to continue doing what she loves while offering her story to her listeners: “If I can sing a song and someone tells me it really, really touched them, that makes [me] feel good. You can sell a million records…or, you can sell a million influences.”

And Bentley’s got heaps of rich life experience to offer up through her music. After running away and living on the streets as a teen, she has fought hard to get to where she is now. How does she suggest others overcome obstacles to meet their potential? Says Bentley, people should “follow their hearts and be confident…I bet they find things about themselves they never knew they had inside them.”

Right now: On the cusp of major recognition with the release of her debut album, Stride.