The very first issue of Faze Magazine was printed in February 2000. Since then, for the past 15 years, Faze has been pushing out issues that inspire and empower young women to be fearless!

I interned with Faze in 2008 and I’ve seen our Canadian publication grow; spreading our wings to empower young women with our live events, website and social media. I’ve been with Faze for six years of my life (the good years of my youth) so it’s hard for me to pinpoint just one amazing memory. When I explain to others what my job is as the Special Projects Manager, their eyes light-up with excitement when I mention the celeb interviews and photoshoots; “Oh my god, you’re so lucky! Did you meet Justin Bieber?!” Even though I have (and he was very nice) that’s not my favourite memory. I enjoy getting to know the amazing people in our team who love to empower young women as much as the next. My fave Faze memories are created when we hang out as a team – going out bowling, stuffing our faces at BBQ’s, making fools out of ourselves while playing Just Dance, or simply grabbing a meal together– because that’s when true bonds of friendships are made. As Jennifer Aniston once said “Where would you be without friends? The people who pick you up when you need lifting? We come from homes far from perfect, so you end up almost being parents and siblings to your friends-your own chosen family. There’s nothing like a really loyal, dependable, good friend. Nothing.” True that, Jenn. 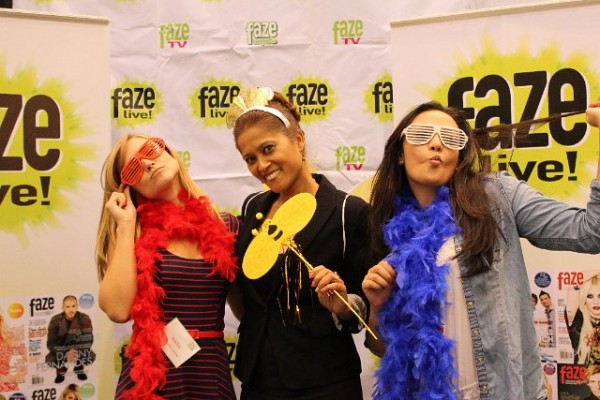 Dana, Lorraine and Jessica letting loose at the Faze photo booth at the Student Life Expo

Below are comments from friends and members of my Faze family as they recollect their fave Faze memories.

I have a lot of memories with Faze Magazine—six years worth, in fact. Faze was always more than a job to me. It was about having a positive impact on one corner of the world: informing, entertaining and inspiring young women to reach the incredible potential inside. Interviewing celebrities like Ed Sheeran, Justin Bieber, Selena Gomez, Hugh Jackman and more—they’re all good memories. But the one moment that stands out doesn’t involve glitz and glamour and grade-A stars.

I had the opportunity to go hang gliding for an article in the At Play section. To give this context, I should say I am afraid of heights. No, that’s not true. I am terrified of heights. So why did I say yes when Lorraine asked me if I wanted to soar 2,500 feet above the ground, with nothing above me except some metal-framed, material-covered wings? Temporary insanity (just kidding). I saw it as my opportunity to face a fear head on and conquer it, not because I plan on defying gravity on a regular basis. However, I think there is a certain power in looking directly into the eyes of what scares you and getting the chance to be the one who says boo. To me, that’s what Faze is all about: empowering young women to take whatever life has to offer with confidence.

I got to fly that day, when we went hang-gliding. It was terrifying and exhilarating and so totally worth it. And maybe, just maybe, I’ve been flying ever since. – Dana Krook, Editor-at-Large. 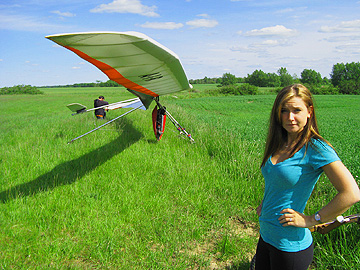 There have been too many exciting moments that I have experienced with the Faze family. If I had to pick my favourite Faze memory, it would be the “Break Free” event Faze threw for hundreds of loyal readers. The event was filled with manicures, makeup artists, yummy candy stands, and of course, the Faze team handpicked special celeb guests. We got front row seats to watch Karl Wolf and Kristina Maria perform, which was an amazing experience on its own. That night I was one of the photographers for the event and I had a blast taking pictures of the guests and our performers. To be in a room full of people who had a ton of energy definitely gave me an adrenaline rush. I loved the entire vibe of the event; it felt like a party that no one would ever forget! – Charlotte Chong, Intern. 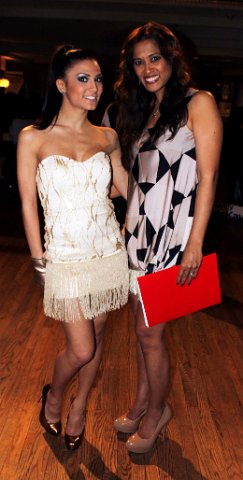 I’ve always loved being on set for our Faze cover shoots. It’s such a fun and energetic atmosphere! The first shoot I helped out with was at the Cody Simpson concert at The Phoenix in Toronto. I had just got started interning with Faze and was super pumped to get to be a part of the team so early on. Fast-forward a few years, and now I’ve gotten to help with a lot more shoots—from Ed Sheeran and Marianas Trench to Victoria Duffield and Fifth Harmony. The Ed Sheeran shoot is still probably one of my favourites. Not only is he super charming and talented, he’s also such a humble celebrity. He showed up to the shoot wearing a casual t-shirt and jeans. I always have a great time at these shoots because of the people, the positive vibes and not to mention the cupcakes! – Christina Dun, Intern. 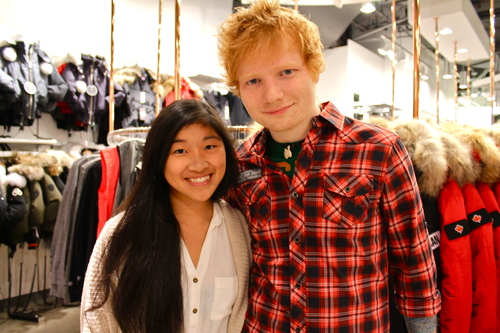 There are too many memories to choose from when it comes to Faze (especially because I’ve had the best laughs with one of the best teams out there!). But, I think to this day one of my favourite memories has to be the CN Tower Edgewalk I did with Lorraine. Not only did I get a chance to write a feature-length article, but I also got to push myself and try something completely new, conquering my fear of heights. It’s kind of hard to not cherish a memory of Toronto from more than a thousand feet in the air. – Jemicah Marsigan, past Intern. 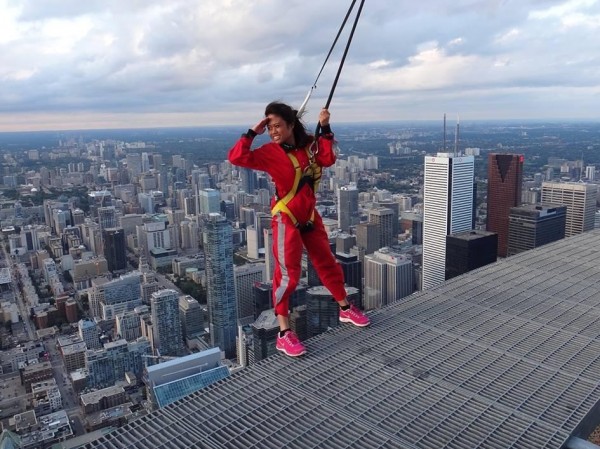 One of my favourite memories was when Jessica and I got to interview Emblem3 back in 2013. I was a big fan of theirs having watched them compete on The X Factor USA, so getting to interview them was a bit surreal (and a little nerve-wracking). I remember meeting Jessica at the Thompson hotel and then we were informed that the boys were actually waiting for us on the rooftop patio (which, by the way, has a pool). When we arrived, the boys had just gotten out of the pool to greet us. So, yes, not only was I already nervous about having to interview them, but now I was going to have to do it while they sat across the lounge chair from me, shirtless. I just remember laughing to myself and thinking, is this seriously happening right now? Even though I was initially nervous, the interview itself felt like a comfortable conversation with friends. In the end Jessica and I only managed to take a picture with (shirtless) Keaton, instead of with the whole group, but it was seriously one of my most memorable, is-this-really-happening moments with Faze. – Michelle Serdan, Intern. 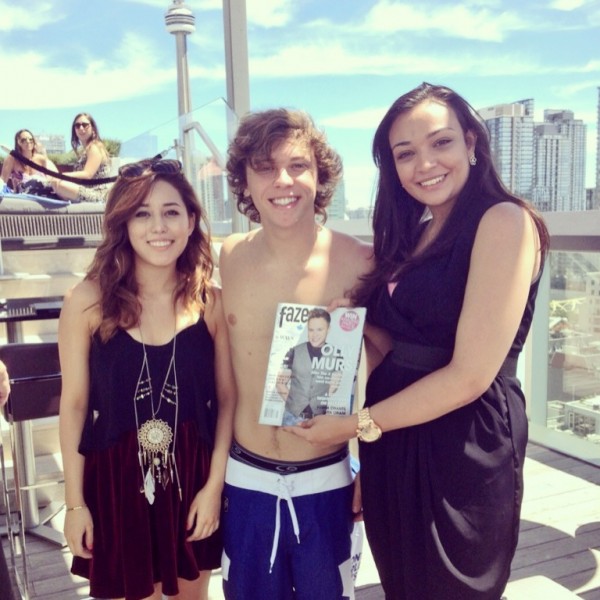 Joining the Faze team was the greatest step I had taken in life for several reasons. Not only do I get to work with an amazing team, I also get to creatively write and conduct interviews with people I’d never thought I would get the opportunity to meet. I got to go backstage at the Big Ticket Summer Concert to conduct an interview with Sabrina Carpenter and Megan Nicole. That was the first time I had been backstage at any large scale concert so seeing the actual production backstage and all performers getting ready, was a whole new experience for me. I just finished conducting two interviews and was packing up when Victoria Baldesarra from The Next Step walked by me. I really loved her jeans and everyone needs a compliment once in a while, so I complimented her jeans. We started casually talking and then all of a sudden we started an impromptu interview! I had so much fun because that interview was as raw as it could get – I had no questions planned so it was just like two girls have a conversation about life, the future and our secret crush for Cody Simpson who was backstage as well. It was a great experience and to add on to that, my little sister was waiting for me in the parking lot outside and I surprised her with tickets to the concert that night! – Suruchi Srivastava, Intern. 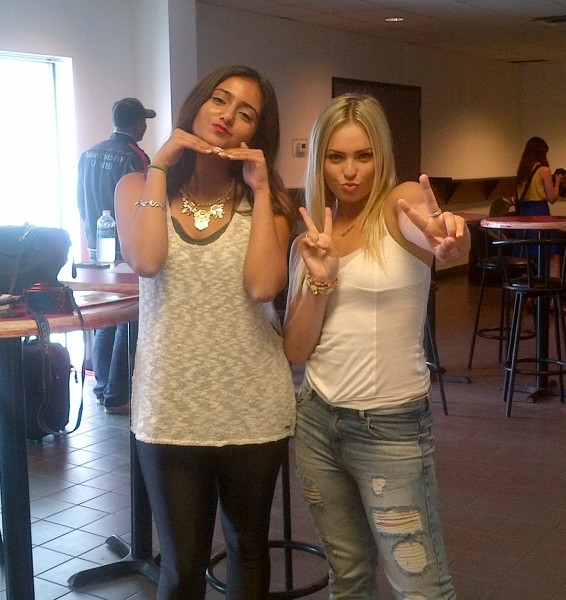 My favourite Faze memory took place on March 11, 2011 when Faze hosted their “Tomorrow Starts Today” live event. Girls fortunate enough to attend were treated to great performances by Tyler Medeiros, Mindless Behavior and Chilla. Pizza, drinks, makeover stations, swag bags, and incredible prizes. It was a fantastic night for all those in attendance. This was my first experience at a Faze event and it truly laid the foundation for my love for this magazine. I will never forget that incredible night! – Kelly Vickery, Intern. 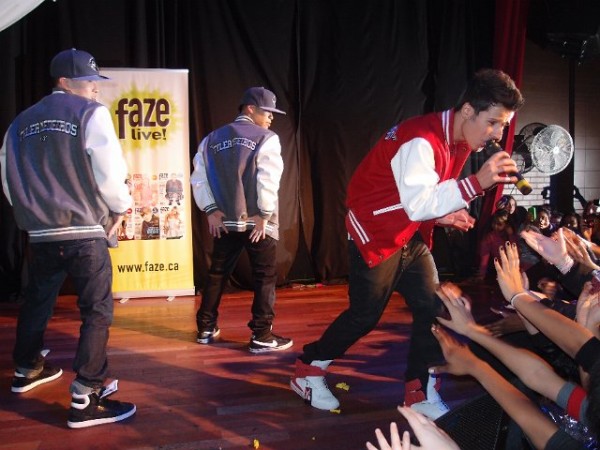 Being new to the Faze family, I have yet to experience a photo shoot or interview. However, I have attended two intern gatherings, and let me tell you, they’re such a blast! My favourite of the two would definitely have to be the Faze Holiday Party. The night started off with a bunch of fun icebreaker games. Then we played Secret Santa, which resulted in me getting some pretty cool swag. After opening the gifts, we ate Chinese food, even Faze’s mascot, Coco (an Amazon parrot), joined us for some noodles! Then we sat, talked, laughed and played with Coco until we were ready for dessert. We enjoyed homemade tiramisu, happily digging our spoons in until we couldn’t eat anymore. It was a great night that helped me get to know my fellow interns better. It also made me realize how lucky I am to be an intern at Faze. – Kate Vickery, Intern. 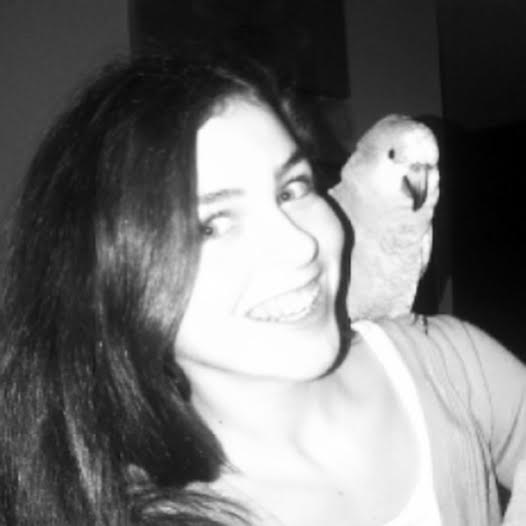 From celeb interviews and live events to fashion shows, yoga hangs and girl-power team get-togethers, there’s never a dull moment! From all of my experiences so far, to choose a favourite is tough, but I’d probably have to say our back- to-school “Power UP!” 2014 live event takes the cake. Hundreds of our amazing Faze girls came to watch performances by Rebel Coast, Neverest, 4Count, Jill Godin and Anastasia A, plus there were killer gift bags loaded with tons of goodies for everyone – the energy was amazing; I loved every second of it! I’m so thankful for everyone I work with. The Faze team is a family and I’ve already made friendships that will last a lifetime. – Deanna Foster, Intern. 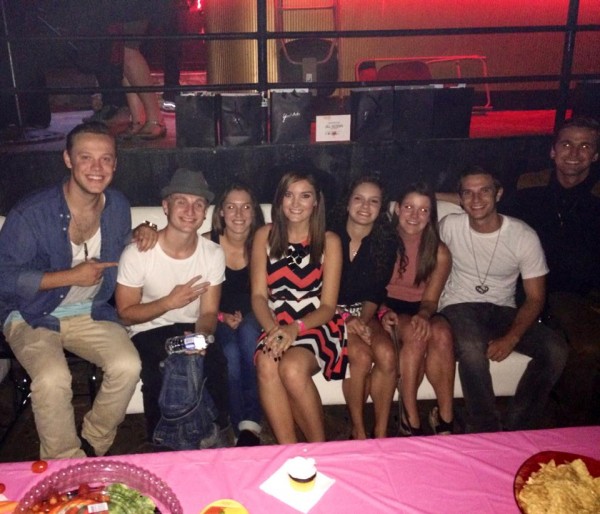 Deanna and friends hanging with the boys of 4Count at the Faze Power Up Live event.

I’ve had a lot of great memories! During my four years, as the graphic designer, the team has made me feel like I am part of a work family. Every year we get together with the team and celebrate the holidays with tons of food, laughter and games. We exchange stories and have a great time. I especially enjoy working at Faze because they allow me to freely express my creativity when it comes to the magazine’s layout and design. It’s been a great four years working at Faze, and I want to wish them all the best for the next 15 years (or more)! – Mara DeGirolamo, Graphic Designer. 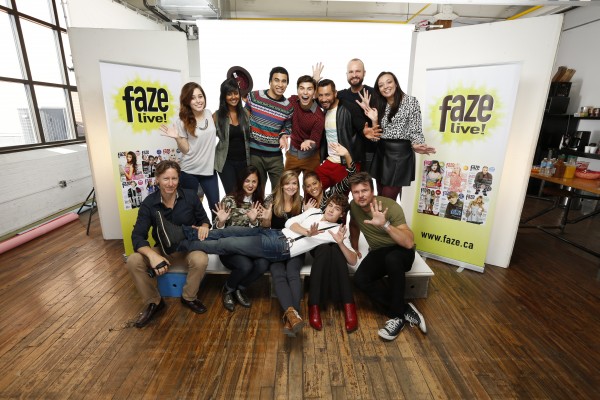