Body implants along with tattoos, piercing, branding and scarification are a type of body modification or body art as some call it. 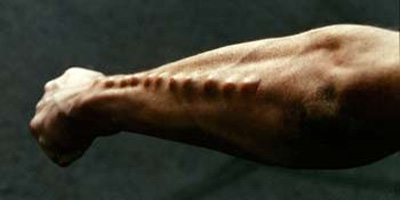 We live in a time when it is easier and more popular than ever to change our bodies. More people than ever are turning to things such as breast augmentation surgery to give them the body they want and boost their confidence. People are becoming aware of the breast augmentation recovery stages and the different things to be aware of when changing their bodies. Another step up from this is 3D body implants.

Body implants are created by placing an object under the skin to make a design. It’s a pretty simple procedure, really: an incision is made near the area the implant will be placed, then a pocket is made and the object is inserted. The incision is then stitched up and it’s all done.

Steve Haworth is a pioneer and expert in the art of 3-D body modification. When asked in an interview with bmezine, what motivates people to get the implants, Steve replied, “Extreme individualism. Ten years ago if you had a piercing or a tattoo you stood alone, and today, even though piercing and tattooing are still a wonderful form of self-expression, you stand in a group.”

The most commonly used materials are titanium, soft solid silicone, and Teflon. Other materials such as stainless steel can be used, but some people can develop an allergic reaction and reject the implant. The procedure itself is quite safe, but as with any sort of body modification, there are some risks.

Steve says, “We can sterilize our instrumentation, we can make the area that we’re working around aseptic, we can control to some small extent airborne pathogens, but otherwise that’s the max of what we can do.”

But if the right material is used and a professional does the procedure, it is very rare that the body will reject it. If rejection does occur, the body will push the implant out through the skin. 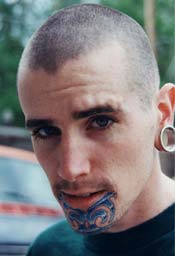 Another serious risk is hitting nerves while making the incision or inserting the object. “There’s a lot of areas in the sides of the head near the temple and the cheek area that I will not work on because there are nerve channels that run in those areas that control muscle function. I’m really, really, really apprehensive about doing work on the back of the hand,” Steve adds, as there is the risk of possible loss of sensation to some of the tissue.

Once the procedure is finished, sometimes the object will shift slightly from its original position and that’s completely normal. However, if the customer is careless and doesn’t take proper care, the object can shift severely and in turn change the look of the design.

The length of time the process takes depends on the type of implants and the person it is being done on. Each person’s fibrous layer is different; some may take less than ten minutes, others up to half an hour. It also depends on the size of the implant.

The implants are meant to be permanent, but the can be removed. In fact, it’s easier to remove them than it is to put them in. If someone isn’t happy with the outcome, or if they’ve shifted at all, they can easily be removed or replaced.

Steve has performed bead implants on his fiancé and has been “in and out of her wrist three times in a row. The first time was five beads, the second time was five larger beads, third time was a captive bead ring instead of beads. As far as reversible, in most cases it’s easier to remove than to put in,” Steve explains.

Some people will go to great extremes to stand out in a crowd.

Brodie Hutton, 17, said, “I think the body implants look cool, but it depends on where you put them. I like the ones on the chest and the arms, and I think guys look a lot better with them than girls do.”

However, Michael Johnston, 18, isn’t a fan of the procedure. “It’s closer to body mutilation than modification. If people really want to be different they should just do their own thing then they won’t need to put a sign on their body that says, ‘Look at me, I’m trying to be different.'”

So, like with any art, whether it be on the human body or hanging on a wall, it all comes down to personal preference, some people like it and some don’t.