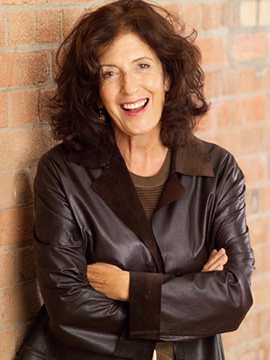 Anita Roddick, founder of The Body Shop states her principle belief is built into the rationale of her business, “The sexiest thing right now is protest. If young people today become passionate and persuasive about something, then they become confident. And there is nothing more engaging than that.”

Anita believes strongly in developing confidence and establishing a high self-esteem in young women. After all, people who feel good about themselves do good things for the world.

As a teen, Anita had a lot of confidence, even though she considered herself an outsider. Born into an Italian immigrant family in a small town in England, Anita was certainly different to the people around her and this set her apart from the norm. Although she gained a high level of energy, spontaneity, and confidence from her mother, it wasn’t until she went traveling that she began to see things differently. Anita says her travels were like, “University without borders. I traveled everywhere and then everything became possible.” It was these adventures in countries like Tahiti, Madagascar, New Caledonia, and South Africa — countries that she considers ‘heroes’ — where she began to see the beauty of the human form.

“Everywhere I went I saw that the idea of beauty was different. In Asia, they really value white skin so they would gather nightingale droppings and use that to whiten their skins. In Ghana, to be beautiful, is to have a magnitude of flesh, which represented the world. In Japan, the neck is the most beautiful part of a woman. In Moslem societies it is the hands. So everywhere I traveled the definition of beauty changed; especially to that of England.”

This had an astounding effect on Anita, who as a teenager was more influenced by the culture of the theatre than fashion magazines, and was never really focused on applying make-up and dressing herself up to look like the women in those glossies.

Today, Anita sees glossy fashion magazines as the culprits who are causing the self esteem around the body to be eroded away, something she takes on as a personal battle to rectify. “You know,” she says, “(Those magazines) have it right. They know that if they can control your mind, they can control your body.”

After her travels, Anita saw the body as something special and completely different to what was portrayed by the media. This inspired her to open a small beauty supply shop in her garage while her husband was travelling. The store started with only 25 products in stock, “The bottles were really cheap and there were things floating in some of our products — we had this beeswax treatment and there were pieces stuck inside and we’d tell the people that it was fresher that way.” So what made the idea such a success?

“Everything we made had a story attached, and because of that that we were forgiven for every mistake we made.” Anita and her husband, who joined the venture once he returned from his two-year hiatus, believed they had a message to send about society and their opinion of what was wrong with it. They wanted to make changes and so aligned themselves with organizations like Amnesty International and Greenpeace. The store became about spreading messages and using the products to do so.

This kind of blatant activism offended the British authority, and Anita faced fierce opposition from the media who began a relentless pursuit to expose the founders of The Body Shop as hypocrites. “It was (terribly) exhausting,” Anita recalls about the low points with the media, but she never saw what she was doing as a major risk, “I think that (entrepreneurs) are pathologically optimistic and will always make things happen,” says Anita. Her strong entrepreneurial character and rebellious spirit, tied together with a strong conviction that, “if anyone tells you that you can’t, don’t listen!” have helped her become one of the most successful women in the world.

On understanding the meaning of success, Anita elaborates, “First and foremost, never conform. Don’t do what everyone is telling you. Challenge everything. When I was younger I was free to travel and experience and see the world and make my own mistakes and figure it out. I didn’t go into business school, I just followed my gut. I even believe that by going to business school you are conforming, because in the end you just become another employee to the system. It’s the passive path. Be aggressive, not in a negative way, but in your path and your emotions and your life.”