With a total of 50 states and a land area that spans over 3,617,827 square miles, the United States is the world’s biggest country after Russia and Canada. It’s also one of the most fascinating, comprising thousands of diverse cities and towns within its borders. Therefore, it isn’t surprising that the U.S. of A is one of the most traveled locations on the globe, with an average of 80 million international visitors annually.

With so much to see and do, the States is one of the best all-around countries to tour even without a travel companion. In this article we narrow down some of the top U.S. cities to visit on your next solo trip. No matter your interests, there is sure to be something intriguing on this list for every type of eager tourist.

Of course, the Big Apple takes the number one spot on our list of must-visit cities as a solo traveler. After all, New York City is unlike any place in the country, with a huge multicultural population, international cuisine and, best of all, a plethora of major monuments and all the sightseeing one could desire. Whether it’s viewing fine art at the MET, catching a show on Broadway, or lounging in Central Park, this city is a solo traveler’s dream. In fact, many locals say that you could live in the Concrete Jungle for a lifetime and still have more attractions and tours to enjoy. There’s a reason NYC is the most travelled destination in the U.S.

The City that Never Sleeps may be a hotspot for solo travel in the East, but on the other side of the country in the West, the Entertainment Capital of the World undoubtedly takes the cake. Las Vegas is every tourist’s one-stop-shop for all things nightlife, glamour, gaming and more! Known for its international reputation of vibrancy and fun, the city is brimming with opportunity for entertainment at every twist and turn. Aside from being the proud home of major world-famous gaming facilities like the Venetian and the Bellagio, Las Vegas tourists can visit the oldest casino in the entire U.S.: the Golden Gate Hotel and Casino. First opened as a casino back in 1931, the Golden Gate is the most historic building of its type on Freemont Street, and it still operates today. Mixing modern flair with vintage charm, the overall look and feel of Las Vegas is truly one-of-a-kind. 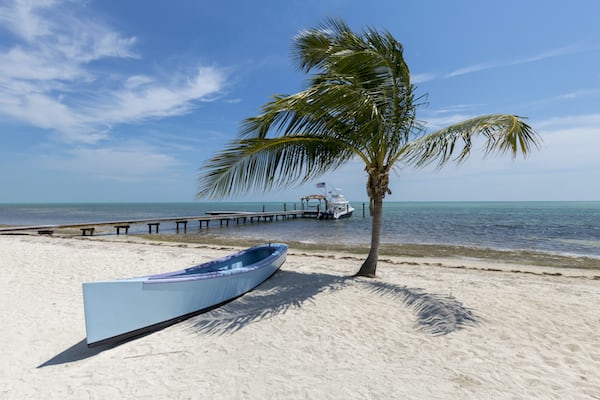 The Florida Keys encompass a variety of beaches that are known as some of the most picturesque in the entire U.S.

Switching gears to coastal resort views and boat rentals, the Florida Keys comprise a selection of gorgeous tropical islands that are ideal for a solo summer trip. Whether you plan to tan all day at the beach or go on a scuba diving adventure through the Great Florida Reef, the options are endless and all equally picturesque in nature. Because the Keys are generally warm year-round, this is a trip that could be taken at any time, making it a great winter escape as well. Since there isn’t much public transportation, as is the case in big cities like New York and Las Vegas, getting around the islands is best done by renting a car or cruising around on a bike if you don’t need to go a long distance. The bustling city of Miami is also only a little over one hour away by car, so on your way back it could be worth checking that out as well!

Moving into the heart of the Southern U.S., Nashville, Tennessee should definitely be on every solo traveler’s bucket list. A city full of country music and great soul food, Nashville is often referred to as “Nashvegas” for being a lively center of musical entertainment and concerts galore. Here, tourists can see a show at the Grand Ole Opry, marvel at music legends past and present at the Country Music Hall of Fame, or chow down on some of the country’s best ribs and pulled pork at one of Nashville’s many famous local BBQ joints. One thing’s for certain – you will be having so much fun you will barely remember that you’re alone!