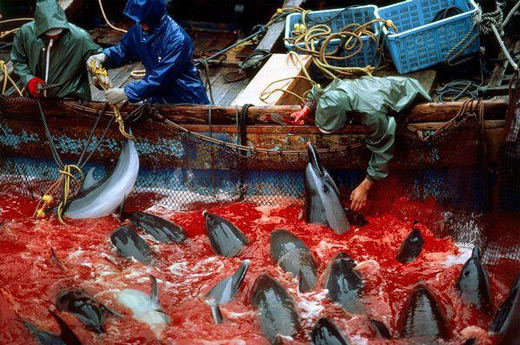 For decades, fishermen in Futo, Japan slaughtered dolphins, killing them by the thousands to sell as meat. Today, the fishermen are taking tourists out to admire them instead.

In 1999, published videotape taken of their slaughter horrified television viewers around the world. The dolphins were being captured by the traditional method used by Japanese fisherman called drive fishery. The process involved surrounding the dolphins with nets and forcing them into a harbour before they were speared by fisherman and hauled off for butchering. The dolphins could be heard screaming and crying out for their pod members. Our environmental group BlueVoice.org realized something needed to be done. We began monitoring Futo and other villages in Japan where the slaughter was taking place. Without warning we would visit Futo with our video cameras. This kept the fishermen guessing as to when we would come, and since they feared they would again be videotaped and exposed to the world, they stopped the slaughter. 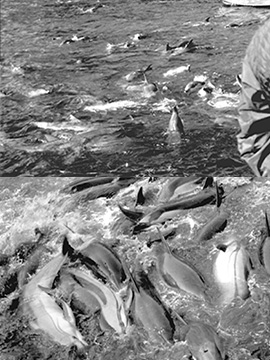 We then needed to work with the fisherman to find an alternative source of income so they could give up the dolphin hunt permanently. In October 2002, the head of the dolphin killers, Izumi Ishii, gave up the hunt and launched his first commercial dolphin- watching expedition. He now takes paying tourists out to observe the beauty of dolphins swimming free. Izumi says he had a change of heart when he heard the dolphins crying as they were killed. “I could not bear it,” he says, “The value I now see in dolphins is not the value of their meat, but of the wonder they incite in us.” 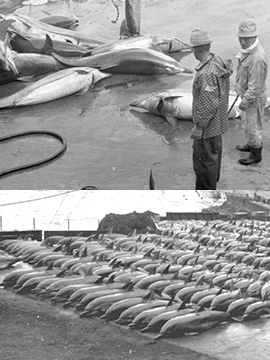 The dolphin-watching business is now a success and despite having a government issued permit to kill 600 dolphins per year, the villagers of Futo did not kill a single dolphin during the 2002–2003 season.

Working in Japan was an inspiring experience. To be a part of turning a horrific situation where dolphins are brutally killed into a situation where they are admired is truly marvelous. Many environmental problems can be solved by people who care. It just takes some effort.

Hardy Jones is the Executive Director of BlueVoice.org, an organization committed to protecting dolphins, whales and the oceans. He has spent more than 20 years filming and studying dolphins in the wild. Once, a group of dolphins saved him from a shark attack. He can be contacted through www.bluevoice.org.