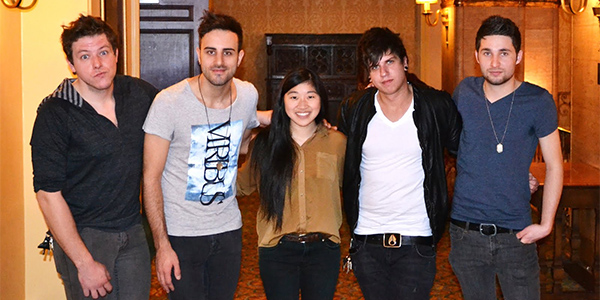 Hailing from Quebec City, Fiction in Motion came to Toronto for Canadian Music Week to rock out with their fans, enjoy the festivities and simply have a good time. They did just that when the four guys performed at the Neutral Lounge on March 21.

Created back in 2007, the band is composed of Michael (vocals and guitar), Mark (lead guitar and vocals), Jonathan (drums) and Eric (bass and vocals). Since then, they’ve come out with hits such as “Don’t Leave Me Behind” and “Do You Care.” It’s been an interesting journey for the guys, which started with winning first place at “The Most Beautiful Rock of Quebec,” a well-known music competition in Quebec.

They describe their sound as “velvet rock, a kind of soft rock,” and they were glad to be a part of CMW this year. For them, the most difficult part of breaking into the industry is being an English-speaking band in a predominantly French-speaking city.

“It’s really hard for us,” says the band, “so we have to really think about doing our thing in Quebec, but also try to show it to the rest of the world.”

Earlier this month, they released a new music video on YouTube for “Today,” and it’s gotten great feedback so far!