Faze last caught up with newly 18-year-old star Austin Mahone when he was here for MuchMusic’s Big Jingle in 2012 and he was a huge hit on our spring cover in 2013. 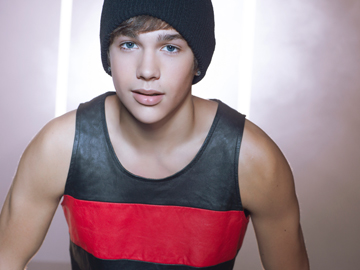 Since then, Austin Mahone has been making headlines while on the Red Tour with Taylor Swift and the Summer Tour with Bridget Mendler, becoming the new teen ambassador for Lil Wayne’s Trukfit fashion clothing line and picking up a few MTV awards along the way.

On April 4th Austin celebrated his birthday and had a gift for his #Mahomie’s as well with the announcement of his first album, The Secret, set to be released on May 27, 2014. “I’ve been working on this album for like two years and I know my fans are excited,” he says. “A lot of this album sounds like my single ‘What About Love’ because I worked with [producer] RedOne for a lot of my songs.”

Austin was back in Toronto as the special guest performer for the live finale of The Next Star: SuperGroup. Did you know that Austin Mahone was almost part of a boy band? “The first time I almost got signed, I was almost signed into a group. It didn’t work out,” Austin explains. “The hardest thing about being in the group would be favourites with the fans. But if I were the favourite, then it would be the best thing. ”

But Austin has no plans of joining a supergroup. “Everything happens for a reason,” he explains.

Before Austin took the stage to perform his latest single “MMM Yeah” (featuring Pitbull) and a never-heard-before single off his new album, “Til I Find U,” he did his usual pre-show rituals. “I get really excited and hyped. We always get into a nice group prayer, and then I drink a lot of water to stay hydrated.”

With the release of a new album, Austin will be embarking on a summer tour with The Vamps and Fifth Harmony, as well as taking a few BFF’s along for the ride. “I’ve known them since fifth grade, so I’ve grown up with them,” Austin says. “You have to have them or else there are only adults and that’s just boring. We’re always up to crazy stuff. We’re driving from city to city—it’s the best.”

With his Mahomies, family and friends by his side, Austin Mahone is planning to hit some big goals this year with his new album. “My next big goal would be to have my album go #1. I want to have a #1 single and I also want to go on a sold-out arena tour,” he says.

It’s no secret that we’re behind you every step of the way, Austin! 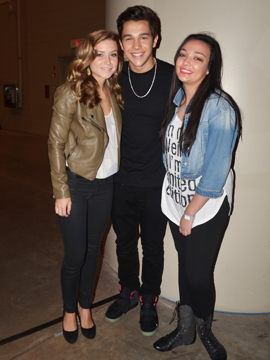