We asked MTV Canada host Jessi Cruickshank to vent on anything.  So what ticks her off? Try-hard teens that can’t just have fun.  And lots more… 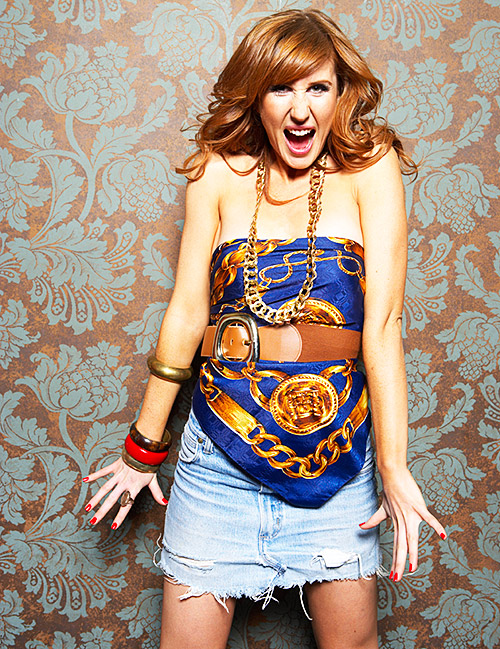 When I was 15, I had a bowl cut and a unibrow. My goals in life were to end world hunger and to meet Nick Carter. My biggest challenge was balancing soccer practices and science projects. And my idea of rebellion was staying up until midnight to watch Saturday Night Live. Loser? Maybe. Normal behaviour for a 15-year-old? Definitely. So my grooming habits were a little amateur, my musical taste not the most sophisticated, and my nightlife less than exciting. But that’s what life should be like when you are 15. When I see the girls of Laguna Beach and My Super Sweet 16 getting Mystic Tans and manicures, squeezing into what I can only assume must be glittery dish towels, and throwing tantrums when the white Mercedes they asked for turns out to be black, I can’t help but throw a little tantrum of my own—why are teens today growing up so unbelievably, inexplicably, ridiculously fast? If brown is the new black, then 12 must be the new 14, because everywhere I look—from MTV to the mall—“kids” are looking and acting a whole lot less like kids and a whole lot more like, well, grown-ups.

Is it just me, or have scabby knees from playing sports turned into blisters from wearing heels? And have worries about homework turned into panic about boyfriends? I decided to do some research to find out. It turns out three quarters of 11- to 14-year-old girls wear makeup, almost 350,000 teens had plastic surgery last year, and by the time they are 12, the majority of children describe themselves as “cool, trendy, flirtatious, sexy.” What?! I don’t even think of myself in that way now let alone at 12, when my concept of “sexy” was playing Capture the Flag and eating Kraft Dinner. At a time when our parents are so consumed with nipping and tucking, sweating and plucking in a desperate attempt to seem younger, why are we trying so hard to grow up? Has our society really become so media driven, over-sexualized, and status-obsessed that it is actually shortening our childhoods?

My question was answered this summer when filming an MTV Live special in South Africa. Upon walking into a devastatingly dilapidated township where thousands of people were living in poverty, it wasn’t the houses made of tin and mud or the lack of clean running water that shocked me the most—it was the sight of children playing that truly struck me as foreign. Hundreds of kids and teenagers were carelessly laughing and running and joking and being, quite simply, kids. There was something so pure, so natural, and so utterly un-Hilary or -Lindsay about it that made me slow down and appreciate that crucial time in our lives that our society seems so anxious to speed up.

So, just for a moment, let’s forget about looking like the girls in magazines, forget about trying to be popular, forget about parents pressuring us, forget about getting asked to the prom. Forget it all. And let’s be kids again. Carefree, hopeful, scabby-kneed kids. Just don’t ask me to grow back my unibrow.

Least favourite food:
Ham and jam sandwiches. As a kid, I went through a
phase where I would only eat foods that rhymed. Seriously. After a year, the ham and jam business got a little old.

Ugliest colour:
Pink. I’ve tried but I just can’t do it. I’m a redhead—it makes
me look like a human Valentine’s card.

Silliest song:
“Jessie’s Girl” by Rick Springfield. Why does the one song that reinforces the fact that I do, in fact, have a boy’s name have to be so darn catchy?

Worst movie:
Jaws. I saw it as a kid and was traumatized – I literaly wouldn’t swim for months.

#1 turn off:
Bad spellers. It sounds silly, but it says a lot about a guy’s intelligence. A dude I kinda liked recently emailed and said he would “fone” me… to which I replied, “don’t bother.”

To find MTV in your area, log on to MTV Overdrive at www.mtv.ca.