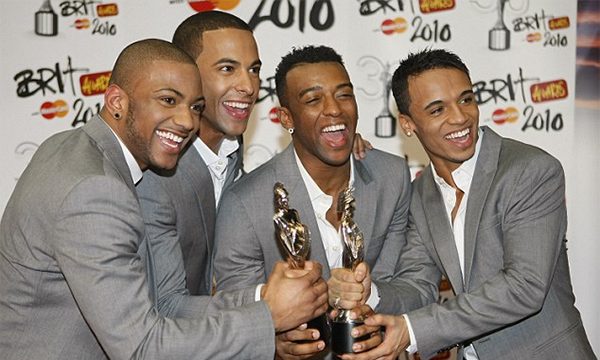 You’ve probably heard their song “Everybody in Love” on the radio or even belted out the words once or twice when it came on the countdown, but don’t you want to know more about the up-and-coming British boyband JLS?

As finalists on the X-Factor, these guys are pros at performing live and winning over audiences everywhere. So, it was no surprise that they received an overwhelming response at this year’s MMVAs when they walked the red carpet and took the stage to present an award. While they can’t just stroll down the streets in their home country—the millions of female fans might cause a disruption to traffic and other everyday life activities—their fame is just starting over in North America. But you can definitely tell that it’s growing quickly in Canada.

Faze sat down with the four super-cute, super-talent singers (Aston, Oritsé, Marvin and JB) and to talk about their journey and what’s next in the future for them. Here`s a sneak-peak at the interview. 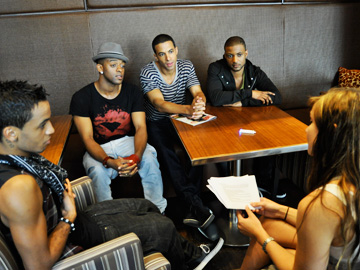 FZ: So what’s the back-story behind the band?

Oritsé: I put the band together about three-and-a-bit years ago now. I remember it was May, 2007. I was just litera lly looking for other members to be in a band with—like-minded, ambitious, fun people. I met the three most talented boys I’ve ever met in my life. We got together, we started singing, we just gelled. There was a magic when we got together that was pretty unexplainable. We exhausted every opportunity we could…in terms of showcases, lives performances, birthday parties—it didn’t matter where it is or where it was—we would sing on a bus stop, if we had to.

And we decided to go out for the X-Factor, eventually—Simon Cowell’s show. The result of that was that we became finalists, got ourselves a record deal—over here we’re signed with Jive—and we’re able to release music and come out here.

JB: He’s always been 100% supportive of us. He can be critical; people sometimes don’t like his honesty, but for us anyway, we appreciate honesty and we want to hear it straight and we want to hear someone tell us what we should be doing…how to improve, so we can go away and work on it. Because for us, it’s about excellence. We want to be the best at everything we do. 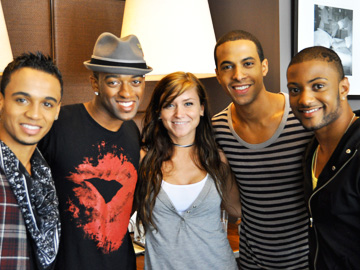 Want to know more? Stay tuned to Faze for more with JLS in our upcoming Back to School issue.