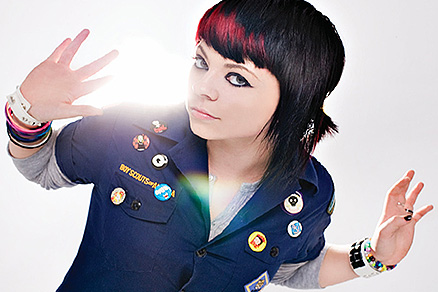 Staring out from the stage, eyes focused past the blinding lights and eager sound equipment, there are literally thousands of screaming fans: some with homemade signs, others with enthusiastic headbands bearing her name and still more with the infamous black and red caricature face, looking fierce as they rise above the crowd.

At only sixteen years old, Shiloh could very well shy away from the pressure, the expectation, the overwhelming shrieks for a perfect performance. But, like in all situations, her reaction to this intimidating crowd is a choice—and her decision? To show the world just what she’s made of.

Shiloh’s MMVA performance of “Operator (A Girl Like Me)” in June of 2009, with her powerful and confident presence on stage, successfully appeased the almost insatiable crowds out on the streets of Toronto who were anxious to see her live.

She not only rocked the house and made a name for herself among other great performers that night—Kelly Clarkson and the Black Eyed Peas, to name a few—but she also stood out as a girl who was firmly in charge of her own rock-star destiny.

“It’s kind of crazy that two and a half years ago this didn’t exist,” Shiloh tells Faze. She’s getting her makeup done, preparing for the cover shoot and taking us back as she remembers how it all began.

Though her age might cause critics to question her credibility on the music scene, she’s definitely not some pop-princess who woke up one day and decided she would pursue music; Shiloh has been singing and performing since before she can remember. 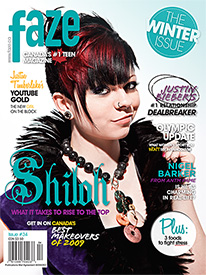 Influenced in early days by her DJ father, as well as the iconic pop legend Michael Jackson, Shiloh entered multiple singing competitions. At the age of 13, after a winning a radio contest in Edmonton for 91.7 The BOUNCE, she was suddenly flying to Vancouver to record a few tracks. From there she was signed to Universal Music Canada and released her first official single, “Operator (A Girl Like Me)” in late 2008; two more singles followed, “Goodbye, You Suck” and “Alright”, as well as her debut album, Picture Imperfect, on August 18, 2009. Since then, you may have heard her emotional power-ballad “I Remember” climbing the charts—but that isn’t the last you’ll hear of a girl like this.

The story of Shiloh’s growing music career is also the story of her growing up in real life. Picture Imperfect is indeed the perfect album for those that feel out of place in the world, and it resonates with fans so intensely because the emotions behind the lyrics couldn’t be more true to life.

“I felt like the odd kid: what was I going to do? What am I here for? In school especially, I felt like I didn’t belong…like I wasn’t one of the clones.”

If there’s one thing you can’t be while trying to stand out among the hoards of people who want to be famous, it’s a clone. The celebs that everyone looks up to have, or had, the courage to be themselves; they’ve drowned out the world that told them to conform. But how easy is it to just go with the flow, rather than fight the current? 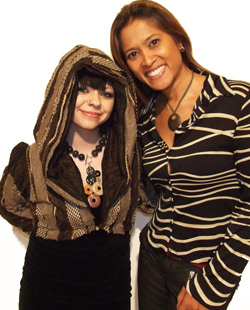 According to Shiloh, it’s all a matter of choice, really. “I was a very quiet, reserved person for a good year and I just wouldn’t want to talk to anybody—and that wasn’t who I was; I was a very social person. I like talking to everybody, and so I said, ‘You know what? I’m not going to do that, because I’m going to be true to myself and I’m going to change.’”

Though Shiloh struggled with her own identity at first, she quickly found that her choice to accept and embrace her unique personality was well worth the fight. “I wasn’t comfortable with who I was, so I changed myself into the person I was comfortable with—not what somebody else wanted me to be.”

With her new-found proactive attitude, Shiloh continues to improve herself as she realizes that certain things are not worth getting worked up over, when you look at the big picture. While she admits that she has “always had a very short fuse,” she has also come to realize that “a lot of people spend too much of their lives worrying or being angry, when they could just let it go. It’s not going to matter in a year.”

So what does matter to Shiloh? Supporting her friends—from her life before and after her music took off (which includes her fab fans!). “I like to think I’m a good friend. We all make mistakes, but I try my best to be the best friend that I can.” Friends, especially those of her bandmates who she’s bonded with while on tour, are more like family than just pals, because they are now firmly a part of her. And that means being beyond comfortable with them. “If you want a friend, you want somebody to tell you like it is. Friends don’t open your fridge and ask you if they can have something to eat. 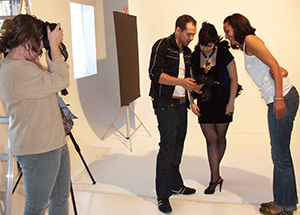 When you get home, they’re sitting on the couch with a big, fat belly and they just ate everything in your fridge.” Besides being a good friend, Shiloh also places a huge importance on giving back. But donating funds from her concerts to charities like World Vision is just one, small aspect of her efforts—and not just because she is now in a position of influence, being a musician in the public
eye. She is unwavering in her belief that “it’s a part of everyone’s responsibility to do something.”

It’s easy to point out the countless things about our world that are unreasonable, unfair and unjust—all you have to do is turn on the news or click your mouse to cnn.com. But it’s not enough to just feel sympathy, says Shiloh. Having just recently collaborated with Chantal Kreviazuk and Lucas from The Cliks on a song for War Child called “People Have The Power”, she says the track speaks of the reality that the choice is ours: we can either make an effort to change our world, or complain and do nothing. “You shouldn’t feel bad for anybody, because if you’re feeling bad for them, then you aren’t doing anything. If you feel that, do something! Help them out! Definitely these collaborations with War Child and World Vision have kind of opened my eyes. I consider myself very lucky to be where I am, and that’s completely aside from the career. Even being Canadian, in general. We’re lucky here.”

Proud to be Canadian, Shiloh is growing up and moving on, both in her personal life and her music career. She is currently working on her second album, due out in late 2010. And as for the black and red caricature of her face that sometimes
haunts her from above the crowds? “I’m hoping to change it up just a little bit, change the makeup, change the hair, since I’m changing along with it…I’m growing up and I want to portray that to everybody.”

With all the changes that are happening in her life, it’s tempting to want time to slow down a bit. But time yields for no one—not even our favourite rockstars— and the future looks more than promising for Shiloh: a new album, a new tour, a new group of fans and, most importantly, a new attitude that plants her firmly in control of her own destiny: “If you don’t like it, change it. It’s all about being happy.” 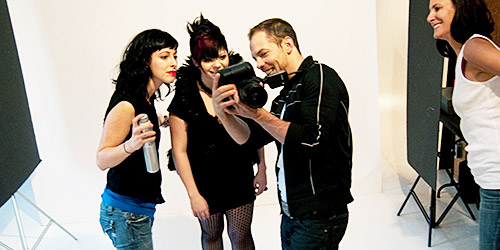