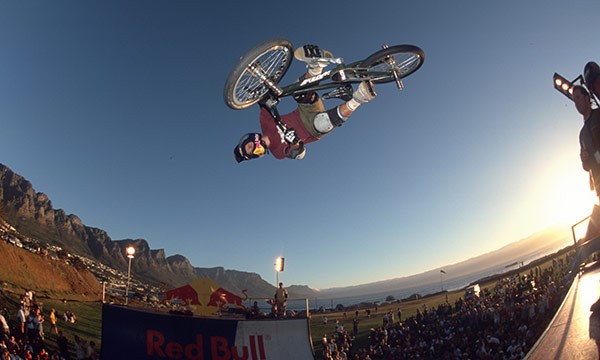 Whether it is the quick thrill of getting air or simply trail riding, BMX (bicycle motocross) had first appeared during the early 70s in California. Modeled from early day motocross bikes, BMX’es first had 20-inch wheels and were built out of heavy metals, such as steel. The result was a non-motorized version of a motocross bike.

Armed with shovels, enthusiasts changed vacant land lots into jumped filled playgrounds. The sport quickly developed and by the late 70s it had spread across North America and into Canada. BMX at that time featured up to eight riders racing head to head over a smooth dirt course with jumps, similar to motocross racing. In Canada an organization called the Canadian BMX Association (CBA) offers event in which riders can race against people of the same age and skill. BMX would transform again and by the 80s, it would develop into freestyle riding.

Freestyle, which continues to be popular today, brought riders to skate parks, half-pipes and the streets. New BMX technology came during the 80s, such as the rotor, which allows a rider to turn the handlebars a full-circle without tangling brake allowing new tricks to be invented. Nac-nacs, Can-Cans and Helicopter were new tricks of the trade. The sport has gone to an extreme level. 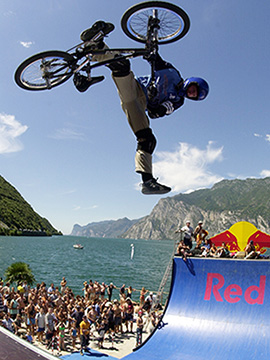 Today, high profile contests such as the Gravity Games have increased the sports popularity. Riders perform tricks on the street courses, ramps, half-pipe (vert) and dirt. It wasn’t until X-Games introduced Downhill BMX’ in 2000 that BMX racing had become popular once again.

Canada has many popular BMX’ers, such as Jason Enns, Dave Osato and Jay Miron. Miron is a very popular rider and has relocated back to Canada after several years of sponsorship with Schwinn in the U.S. He is promoting his new bike company, Macneil Bikes, and his magazine, Chase BMX Magazine, which has helped to inform enthusiasts in Canada.

In a sport typically dominated by males, 16 year-old Makara Martin has been giving the boys a run for their money. Hailing from Airdrie, Alberta, Martin has given girls a positive role model, winning the CBA #1 pro female rider award. Chris Astofooroff, a Canadian sponsored by Redline Bicycles, is also making a name for himself taking fifth place overall at the UCL World Championships last year and keeping pace with Canada’s top pros, not to mention that he’s only 15-years-old!

So what do you need to try BMX? Whether it is air on the half pipe, racing on a track or just plain trail riding, a starter BMX bike will start at about $300 or less. Higher end models will cost anywhere from $400-$1,000, so make sure you know what your looking for. In Canada many companies such as Macneil, Norco, 1664, Krusher and Yess offer world class BMX products, so find what works best for you. Safety is also a factor so helmets, shin/elbow pads, and gloves will reduce the number of accidents from crashing.

BMX, like other sports, has its own lingo and slang. Expressions such as X-Up, Pimpin, or Superman will work their way into conversation so be prepared to learn a little.

You can find indoor skate parks and BMX tracks in most major cities across Canada but there are limited indoor venues with ramps so you’ll have to search the net for prime locations. For more information check out Chase BMX Mag or search Canada BMX under a favourite search engine.