Once upon a time, there were four guys who decided to form a rock band called Marianas Trench. 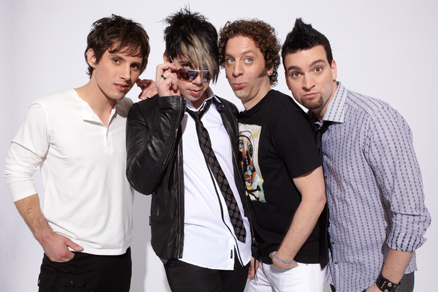 Before too long, they had conquered the music business and were arriving on red carpets in majestic bouncy castles, crowd surfing above thousands of adoring fans, and enjoying the spoils of success and fame across the great land of Canada. And so they lived, happily ever after.

Okay, okay. So, that’s not how the story really goes. While it is true that our cover guys have reached a level of success that is the envy of most musicians across the country (and are now planning a takeover of the States in much the same way), the amount of hard work and sacrifice they put into their careers “once upon a time” is unchanged now that they’ve made it.

The Vancouver-based band, comprised of Josh Ramsay (lead vocals, rhythm guitar, piano), Matt Webb (lead guitar), Mike Ayley (bass guitar), and Ian Casselman (drums), has released three studio albums to date: Fix Me (2006), Masterpiece Theatre (2009), and Ever After (2011). Their singles, like “Cross My Heart,” “Beside You,” “Haven’t Had Enough” and “Fallout,” can always be heard on the latest countdown or radio playlist. But before they were signed to 604 Records (co-owned by Chad Kroeger of Nickelback), the guys were pouring every ounce of energy into the band, hoping to claim just a corner of the music scene. 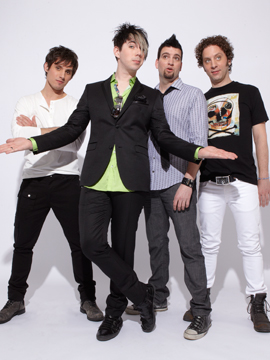 “We were all living pretty poor so we could put as much time in the music as possible,” says Ian. “We all had bartending or serving jobs, but a lot of time was spent trying to break the band.”

Yet they knew that the music world wasn’t as straightforward as time, plus talent equals success. “We knew 100% that this was what we wanted. Whether it was going to happen or not was always a question,” says Mike. “It’s a weird business. It’s not like you just put your time in and work hard and climb your way up the company ladder.”

“You have to just give it everything you’ve got; you have to let the other things suffer,” adds Matt. “You’re making zero money and living in a small cardboard box.”

The guys would work at their part-time jobs during the day, just to pay the bills, and then be in the studio recording demos all night.”We would be working full shifts until 10 or 11 or whatever at night, and then we would go to the studio until 6 in the morning and then sleep for a couple of hours,” says Josh. Then, they’d get up and do it all over again.

Looking back on the story it’s easy to say that it was all worth it, knowing that Marianas Trench is a familiar name all over the country. But, back then, success was not a guarantee.

“There were many days where I would be at work, starting my shift, and I’d have panic attacks because I’m like, ‘Omigod, if I’m a server forever…’ I would literally start sweating,” remembers Mike. “But all I would do is just focus on what I could do to keep making this thing move forward, and then work harder. Every single day, wake up earlier, send more emails, do whatever I could.”

That hard work definitely paid off by not only providing them with a record deal, but also giving them a strong work ethic to keep growing their empire.

And the long hours continue. As fans we get to see the flashy finished product of an album or music video, which is only so many minutes long, but the band banks a ton of hours to create each product, which gives everything more meaning for them. Music videos are usually a full 24 hours or more of constant shooting, and albums can take hours for just one small sound.

“What people don’t think about is literally every little sound that they hear on any song, most likely has been six to seven hours of work,” says Josh. 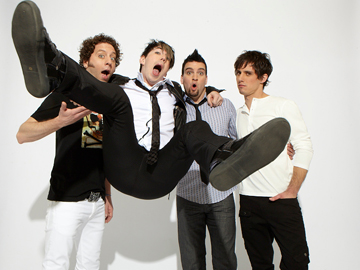 But even though it’s a lot of work, the band makes sure to find the fun in every moment. “If we’re serious on camera, as soon as we’re off we’re just joking around and having fun,” says Mike. “If it’s just work, and the fun isn’t there, then it kind of defeats the purpose of doing this job.”

For Marianas Trench, it’s about getting that perfect balance between fun and function. “I think the key to the music business to me is you take what you do seriously, but you can’t take yourself seriously,” adds Josh.

Now, the guys are adding more international dates to their tour schedules, looking to expand in the U.S., as well as hitting up some spots in Australia and the Philippines. Although they feel like they’re still on the rise in Canada, their incredible success so far, gives them the confidence to enjoy the rise in other places. “It’s kind of neat to do it again in the States, and it feels like the same thing is happening there,” says Mike. “But you appreciate it more knowing where it might go.”

“Because we’re playing for smaller audiences [in the U.S.], we have an opportunity to come out and meet people, which we can’t really do as much in Canada anymore,” says Matt. The band can now savour the experience of some one-on-one time with fans as they build a larger international following.

And so the writing of the story continues, each chapter telling something new about this talented band. They are forever chasing the next step, making their music better and better—for the music scene, for their fans, for themselves.

The thing about fairy tales is that they end, leaving their characters frozen in a pasted-on-smile type of way. They are happily ever after, as if nothing else happens once the ultimate goal has been achieved. But Marianas Trench knows that ever after is not a fairy tale. It’s about continuing to work hard, knowing how far that work ethic has taken you, and believing that it can only get sweeter.

Josh, Matt, Ian, and Mike are all still fully committed to the next chapter of Marianas Trench, even knowing how much it takes to keep a band on top in the music world. “You have to be willing to dump your whole life into it,” says Josh. “You’d better be sure that’s what you want.”

“You should do it because you love it,” advises Ian, knowing others may see only the glamorous parts of the job and not the amount of work involved. “If you’re doing it to be famous, you should immediately quit.”

Even if they had never reached the point of red carpets, fans, and fame, the guys agree the uphill climb would still have been worth it. “I would rather know that I gave it everything that I can than to look back on it later and ask ‘What if…?'” says Josh. “It’s better to do something 100% and fall on your face than just not have done it at all.”

Lucky for us, the only fallout of their efforts has been yet another Marianas Trench single we get to keep on repeat—for ever after. 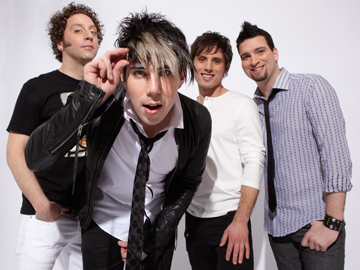 THE GUYS OF MARIANAS TRENCH GIVE US THEIR FAVES

Place to dance:
Mike: by myself when nobody’s watching
Matt: down the street in the rain

Way to spend a Saturday:
Matt: preparing to watch football on Sunday
Josh: I just got a dog, so I like walking around with the dog.

A quick look behind the scenes of the Marianas Trench photo shoot.…