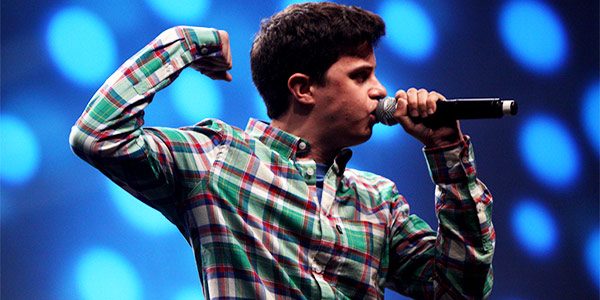 San Francisco rapper Watsky brought his Cardboard Castles Tour to Toronto this spring and he did not disappoint. Playing a sold out show at The Phoenix Concert Theatre, he performed for a high-energy crowd who just couldn’t get enough of the 26-year-old.

Known for his quick tongue and witty lyrics, the YouTube sensation has come a long way since his “Watsky raps fast” video went viral—it’s already racked up 24 million views. This was his second time performing in Toronto (he played at The Mod Club last year), but this time around he has a brand new album, Cardboard Castles, under his belt, which was released last month.

He also brought along fellow Californian rapper Dumbfoundead, who’s been opening up for him on the tour. Dumbfoundead, along with DJ Dstrukt, got the night started on the right note and pumped up the audience, ending his set with his hyped up track “Ganghis Khan.” 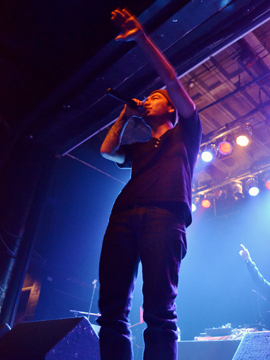 Once it was time for Watsky to take the stage, the crowd was ready for a party. A few paper crowns could be seen scattered on heads in the audience, plus colourful t-shirts with “Watsky” plastered all over them. His Canadian fans sure know how to show the love.

And they gave him a warm—and loud—welcome as he came out on stage rocking a San Francisco Giants cap. His laidback appearance gave the perfect cool kid attitude that you’d expect from a west coast guy like Watsky.

He got up close and personal with the audience, even standing up on the media pit barrier, holding hands with fans to keep him from falling. He performed hit songs from his new album, including “Moral of the Story” and “Strong as an Oak,” plus some of his older recordings. 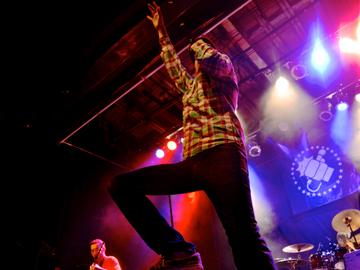 He moved around the stage, fully making the most of it—from climbing up to the balcony, above speakers and mounting the venue’s lion statue. He knows how to put on a good show and work the crowd by keeping the energy level up and really throwing what feels like a giant party.

He combines humour and sharp wit with sophisticated skills of spoken word and he uses his music to reach out to the youth of today. Overall, it was an impressive show. He even joked around that his tour bus nearly broke down outside the theatre and that he might be stuck in Toronto—I’m sure his fans there wouldn’t mind! 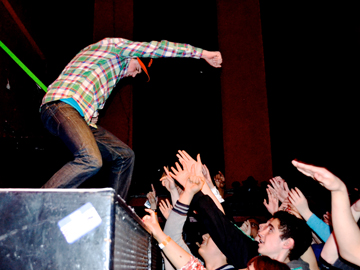 Check out where he’ll be next at georgewatsky.com.