A look at bathing suits as they developed over the past 200 years. 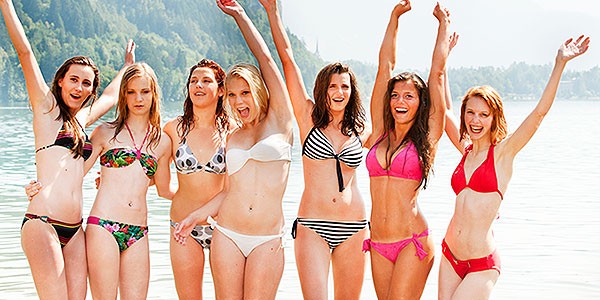 1800s: Swimsuits in this time period might have been better suited for battle than anything resembling something comfortable to swim in. Swimwear consisted of blouses, pants, skirts, and stockings for women and one-piece pantsuits for men. Women willingly sewed weights to the hems of their “bathing suits” to keep the floor-length gown from floating up and exposing their legs when submerged.

1837: Alexandrina Victoria, 18, is crowned Queen of the world’s mightiest empire—but even as the British monarch, she is not supposed to expose her ankles at the beach.

1900s: Suits of this era still favour bodily concealment, rather than comfort. The long woollen skirts ensured beyond a shadow of a doubt that no woman would set foot in the sea. Women’s lib is a long way away. 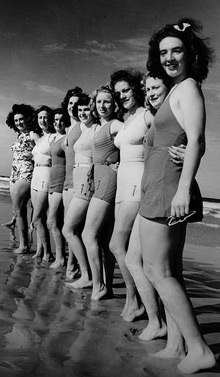 1907: Australian Annette Kellerman stirred things up when arrested in the United States for wearing a loose, one-piece suit that became generally accepted as the swimsuit for women by the end of the 1910s.

1920s: Swimsuits are becoming more user-friendly for women…which means sexier…which means that a tiny portion of leg would now scream out from between the bottom of the pants and the top of the stocking. Many thought the then-racy design indecently exposed the female body, and so police were stationed on some beaches to ensure swimsuits met the code of decency.

1930s: Riviera chic hits stateside as clothing designers begin to experiment with the design of the swimsuit, which eventually evolves into the basic concept of the one-piece we know today.

1940s: Slinky one-pieces are now the official pin-up girl uniform. The classic pairing of swimsuit and high heels is born—bringing glamour and whiplash to the beach.

1946: On a runway in Paris, France, famed designer Louis Réard (pr: rayYard) introduces his latest creation: the bikini two-piece swimsuit, named after the Pacific atoll on which the first hydrogen bomb was tested. Réard’s bikini was so scandalously small by the standards of the time, no professional model would wear it on the runway. So, he hired an exotic dancer named Micheline Bernardini to showcase it. After photos of her wearing it in a reclining pose hit the press, she was swamped with fan mail.

1947: This is the first year since its inception in 1921 that Miss America was NOT crowned while wearing a swimsuit. When the coronation attire was changed to an evening gown, the press threatened to boycott the pageant.

1950: Bikini, bikini, bikini. It is all about the bikini. This decade coins the phrase “does my butt look fat in this?” Padding the “upstairs” becomes rampant.

1959: The now-famous Barbie doll first appears in her black-and-white striped swimsuit that further accentuated her unrealistically-proportioned figure, cinching her waist and emphasizing her voluptuous shape. 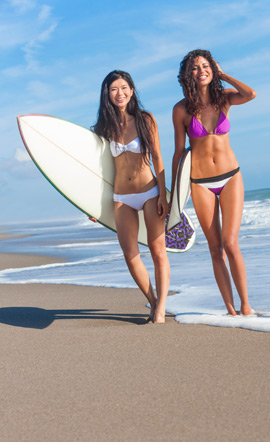 1963: Beach Party, a film starring Annette Funicello and Frankie Avalon, launches a wave of films that turned the bikini into a pop culture symbol.

1970s: Men have gotten away with wearing Speedos for far too long, but the faux pas still goes unnoticed. People had their eyes occupied with what was going on in women’s fashion: bras were being incinerated on college campuses across the Americas. Padded swimsuits begone forever: bosoms be free.

1980s: Let’s face it, the 80s were a bad time for popular fashion. Women’s swimsuits got all weird and way too experimental (e.g., the V-front). Plus, when all that padding went away, breasts were more scrutinized than ever. So, with false ideals portrayed in the media more than ever, many women unfortunately chose to go under the knife (and still do).

1983: Carrie Fisher, as Princess Leia, wears an ornate version of the bikini in Return of the Jedi. The movie has grossed over $850 million worldwide.

1990s: Retro suits were the ‘in’ thing in the 90s (though nobody’s dipping into the pre-1950s bowl for their inspiration). Women choose to ‘gussy’ their suits up a bit. Skirts, sarongs, tube tops…you know, whatever adds flair.

1993: The hugging halter top design or “sports bikini” rules the beaches, thanks to volleyball queen and model Gabrielle Reece.

2000: Let me see that thong-tha-thong-thong-thong. Flossing your butt is now cooler than ever. At least, it is according to Sisqo and the millions of women (and nine men) determined to have maximum cheek exposure at all times. Media 2, Women’s Lib 0.

2003: Pamela Anderson poses in a bikini made of three lettuce leaves for an animal rights poster campaign. The promotion for the animal rights organization named People for the Ethical Treatment of Animals (PETA) reads: “Turn over a new leaf: Try vegetarian.”