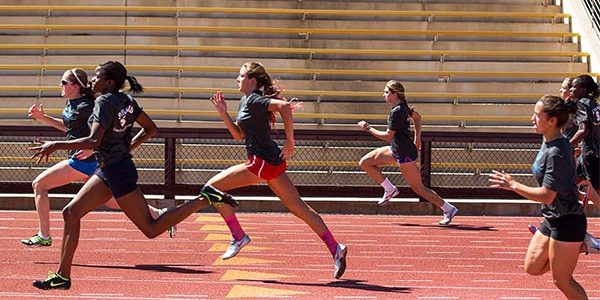 Toronto, ON, July 30, 2004 – The search is on for the fastest kid in the country. Starting today, teens can register for NikeRunDown – a national 35m head-to-head competition involving a series of regional events designed to declare the fastest male and female high school athlete. Teens can enter online. The program involves a charitable component that aims to raise $100,000 to help kids overcome the financial barriers associated with organized sports.

“This is the biggest challenge of this kind ever issued to Canadian youth and we’re psyched that kids will be going head-to-head in a speed competition,” said Derek Kent, Head of Corporate Communications, Nike Canada Ltd. “NikeRunDown isn’t just for kids on the track team. Regardless if it’s football, rugby, basketball or soccer that is your sport of choice – if you’re fast, we want you.”

Not only will the male and female winner get the bragging rights of being the fastest in the country, they will also win a large billboard in their local area featuring their photo, a trophy, time with elite Nike Canada athletes and a banner raising in their honour. Prizes will also be awarded to the regional winners.

Simon Whitfield was on hand at the Toronto launch to encourage youth to get involved, while Steve Nash did the honours in Vancouver.

“I was always the fastest kid on the block, always the fastest in my school,” said Simon Whitfield, Olympic gold medallist. “With this program, Nike is encouraging and rewarding Canadian kids to believe in their athletic abilities, and I’m sure there will be future Olympians in the pack.”

“Whether it’s on the court, on the field or on the track, nothing beats the intensity of a head-to-head competition of speed with an opponent,” said Steve Nash, NBA player, Phoenix Suns. “NikeRunDown gives young athletes the chance to put their speed to the test and to find out how fast they really are.”

NikeRunDown will involve 35m qualifying races in Vancouver, Calgary, Montreal, Halifax and Toronto. Youth aged 13-18 are eligible to race. The fastest three boys and girls from each city will then advance to the finals in Toronto. To gain access to the NikeRunDown, participants and spectators are asked to contribute $1 toward the purchase of a funky, red wristband with “Slow Sucks”, “Be Fast or Be Last” and/or “Run Fast. Brag Slowly”.

The wristbands will be available at NikeRunDown events and select retailers. All wristband proceeds will go to KidSport Canada, an organization that assists youth in overcoming the financial barriers that limit their involvement in organized sport. Nike will match every dollar spent by the time of the finals in September. Nike’s fundraising aim is $100,000 and the public is welcome to purchase the wristbands to help hit our goal.

“By purchasing a NikeRunDown event wristband you are helping kids in need gain access to sports programs, events and equipment that they wouldn’t otherwise have access to,” said Pete Quevillon, KidSport Provincial Director, Sport BC. “With the generosity of Canadians and Nike, KidSport is able to instill the love of sport in kids in communities across the country.”

The program announcement coincides with the launch of Nike’s new Speed campaign. Similar to NikeRunDown, the integrated campaign is a manifestation of Nike’s obsession with speed and includes a complete collection of apparel, footwear and accessories designed to allow athletes of all levels to be the fastest they can be.

The dates for the qualifying races are as follows:

About KidSport
KidSport Canada assists youth in overcoming the financial barriers that limit their involvement in organized sport. An established national children’s charity, the organization has over 110 local chapters from coast to coast. Visit www.kidsport.ca for more information.

About Nike
NIKE, Inc., based in Beaverton, Oregon, is the world’s leading designer and marketer of authentic athletic footwear, apparel, equipment and accessories for a wide variety of sports and fitness activities. Wholly owned Nike subsidiaries include Bauer NIKE Hockey Inc., the world’s leading manufacturer of hockey equipment; Cole Haan(R), which markets a line of high-quality men’s and women’s footwear, accessories and outerwear, and Hurley International LLC, which markets action sports and teen lifestyle apparel. Nike Canada Ltd. was established in 1984 and is based in Thornhill, Ont. Visit Nike.com