Our assistant editor Surya sat down with the guys from Coldplay to the discuss the launch of their album X&Y and their interest in fair global trade.

X&Y were better known in Math class as the unknown variables before you made it the title of your album. What does it mean to the members of Coldplay?
That’s it! It is to do with the unknown variable. Things that are unknown but constant and important. People can tell you how a child is born, but no one can tell you where that spark of life comes from. There are so many amazing mysteries in the world that we take for granted, and we have no idea of the answers. It also has to do with oppositions and tensions of opposites. Life is always about somewhere between one point and the opposite point. It’s always somewhere across the line about life and death, day and night and you’re always along that line. X&Y are also the definitive human chromosomes.

What brought you guys together?
Whatever people believe in…like the guiding hand. We were all put in the same university residence and there were a lot of musicians in there and it took a while for people to seek each other. Chris and Jonny started writing music together; it took off from there. We were friends first and that’s when we decided we should make music.

How do you handle the pressure of being an internationally recognized group?
We feel it’s more important than ever to be as a band and the more success you have, the more things get in the way of music and there’s always more people on board and more things to worry about and more decisions to be made. And now more than ever, we appreciate the four people, all kind of looking out for each other is a lot more rewarding if it were just one person. 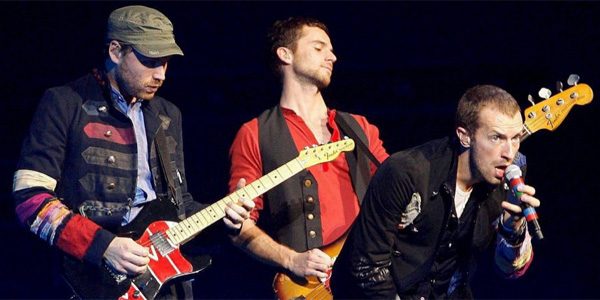 How do you handle the process of music making?
We have to be as honest with each other as much as possible. We have to say if there’s something we’re not happy with, we have to air it out and not let it bubble under. The longer you leave them, the more likely it is to come back and explode. We deal with everything then and there. We try and always get it out so there are no undercurrents or hidden agendas. It’s every important to us that we are ruthlessly honest with each other.

Why did you choose to support Oxfam’s campaign, Make Trade Fair?
It’s something that Oxfam asked us to be involved with and it’s easy for us to do. (Chris has been on a couple of trips to Haiti and Ghana and the band went to visit Mexican corn farmers who were severely affected by the U.S. grain dumping on Mexico). We mention MTF in interviews, we mention the website (www.maketradefair.com) and put it on our website, and Chris wears the equal sign on his hand. For us it’s just a case of making people aware even though we don’t know the answers necessarily. We are familiar with the arguments and what needs to be done, so we point people in the right direction, and towards the right sources. Three or four years ago, people had never heard of the concept of Fair Trade. We’re very pleased that we might have contributed to the fact that people are talking about it now. Now in shops, you can find fair trade products like fruits, tea, coffee and chocolates. It’s a really fundamental inequality in the world where it’s basically keeping the rich richer, and the poor, poorer. It is something that can be sorted out and easily amended. It just takes a handful of people to sign a piece of paper to agree on it and it would make an enormous difference. So we will keep talking about it till something’s done.

People will listen to what we say or endorse. Some people use their platform to make more money, to sell fizzy drinks, sneakers or shampoo. Some people advertise products; we advertise something that will hopefully make a difference to a lot of people in the world.

What would you be doing if you weren’t in Coldplay
That sort of thing that keeps me awake at night. It terrifies me. I can’t imagine what it would be and I thank my lucky stars that I don’t have to make that decision.