Getting to know both sides of the coin. 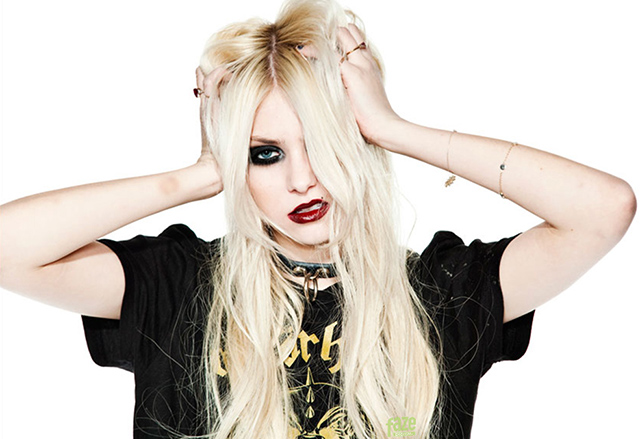 Everyone has a story. But how much of it does the world really get to know? Lead singer of The Pretty Reckless, Taylor Momsen, gives us a glimpse into her life and journey, and the REAL Taylor might surprise you.

Here’s the thing I love so much about this coin metaphor: with the coin placed in your hand, no matter how much you spin it around, taking note of every detail, you can never look at both sides at the same time. Two totally separate faces, but all a part of one whole.

Keeping that image in mind, let me propose an idea to you. Two things, seemingly opposite, can coexist just fine. Unity in diversity—heard it before, I’m sure. Well, what about that notion applied to one personality? Don’t believe me? Ask Taylor Momsen.

As the front-runner for the alternative rock band The Pretty Reckless, Taylor is a familiar face to most of us. She started her modelling career at two years old, and made her first splash on the big screen as the iconic Cindy Lou Who in How the Grinch Stole Christmas, with Jim Carrey. A few years later, at just 14, Taylor landed her biggest role as Jenny Humphrey on the hit show Gossip Girl.

Now, she’s taking a hiatus from the show to concentrate on her blossoming music career, as she tours to promote her new album, Light Me Up, with her band. With Taylor on lead vocals and rhythm guitar, the whole band—Ben Phillips (lead guitar, backing vocals), Mark Damon (bass) and Jamie Perkins (drums)—is making its mark on the world stage. 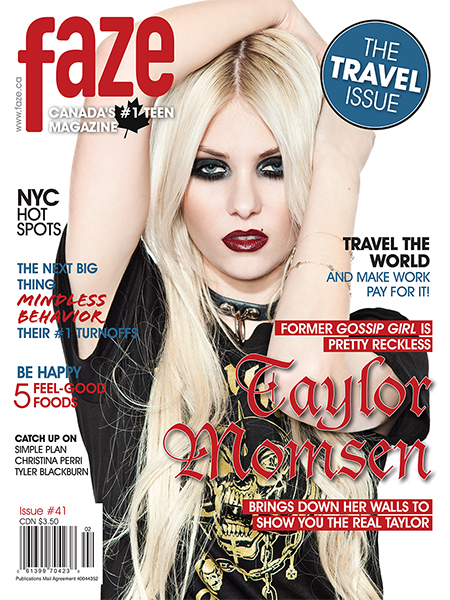 With many celebs from the big and small screens turning to music these days, it may not have been a surprise to discover that “Little J” was exiting stage left to allow Taylor the time to pick up an instrument and head out on the road. But music is so much more than a hobby for her. “I very much enjoy acting, but it’s still a job to me,” she says. “Music is my life; it’s what keeps me going.”

Taylor’s acting career has given her the opportunity to pursue her true passion in life: music. Writing songs when she was as young as five, Taylor has grown up using music as a personal outlet for frustration, saying that this passion has really kept her alive and sane throughout the course of her life.

The one thing about letting someone see a really personal side of you, however; is that you risk rejection. Already under close public scrutiny for being a part of the hugely successful Gossip Girl, Taylor—finally getting to be herself through her music—faces a lot of negative comments. To her, it’s a chance to be who she really is. To the public, it’s a new Taylor, different from the one they’re used to seeing on the show. And it’s a new one that not everyone likes.

“At home, if you knew me as a person, I’ve always been like this—the same kind of dress,” she says. “At one point I [said], ‘I am so faking the world of who I am. I think people might actually start believing that. This is not going to work for me.’ I can’t be in the public eye if I’m not going to be myself, because that’s all you have.” 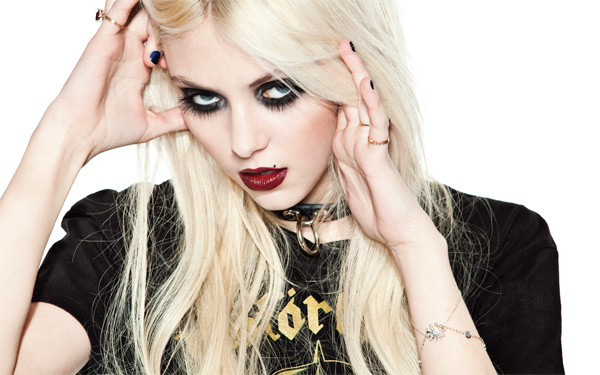 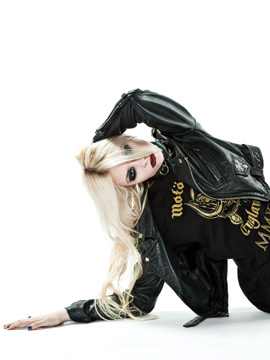 The change in appearance, showing an edgier persona with darker makeup, clothes and accessories, may have been shocking to those who don’t really know her, but the shift was in fact a brave step towards letting others see the real Taylor.

So, who is that girl, really? Believe it or not, Taylor is fairly introverted in real life. “In personal situations I’m very, very shy,” she tells me. “As much as you may see a person in an interview or on a carpet, you never really know that person. I’m human: of course I’m insecure.”

But the shy girl who writes lyrics like, “I’ll never be good enough” (from her first single “Make Me Wanna Die”), seems a polar opposite from the strong, take-me-as-I-am image Taylor portrays as the lead singer of a rock band. Can the two totally different characteristics really exist together, in one person?

Think about your own personality: your likes and dislikes. Does everything match up, putting you solidly in one category or another? Do you love biology, heavy metal and rugby, and everyone gives you a funny look like you should stick to one column?

Unity in diversity: one person, many different parts. I have to believe that such divergences create balance—not to mention a less boring world. They let us be who we really are: complicated and multi-layered and so much more than what we may look like on paper.

“I think you can be both at the same time,” says Taylor, who explains that she’s more than just the shy girl retreating to her own space, or the born leader ready to take on anything. “I don’t want to sound like it’s a split personality, but there are two ways of self expression: the introverted side—where you’re writing and by yourself—and then there’s the performance side.”

Rather than only embracing this performance side—the side that the general public, you and I, would normally see—Taylor accepts both aspects of her personality. She loves being on stage, but also being left alone with her writing and her thoughts. 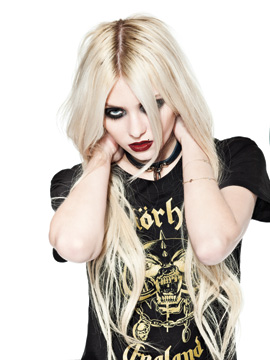 For Taylor, it was all about confidence and finding the right path that would allow her to grow both sides of herself, the outgoing side and the shy side. “I found writing and music. That’s where I am able to be honest and open about everything,” she says. “Find something you love and then go for it. Don’t be afraid to take risks. Go for what you want to achieve in your life and don’t be afraid of what people are going to say about it.”

Yet, wherever there is creation, there will be criticism. We all have to deal with those who judge us harshly and, for Taylor, being a recognizable face can mean the negative is everywhere. “I ignore it. I don’t even read it,” she says. “Life’s too short.”

Clearly not about to sweat the small stuff, Taylor has dealt with in-your-face haters for enough of her life that she seems entirely beyond it all. “Not everyone’s going to like you and, in my case, it’s at a very heightened scale. You have to live your life with the notion, ‘For every person that hates you, there’s someone out there who will like you.’” Easier said than done, but taking the time to look for that flip side of the coin can be totally worth it.

“Maybe you haven’t met [that person] yet, but don’t try to change yourself or fit into something just for the sake of it. Own who you are, and be that to the fullest.” Solid advice, especially considering that following her own suggestions and forging a unique path in the music world has given her more than 330,000 followers (and growing) on Twitter and numerous fan sites. 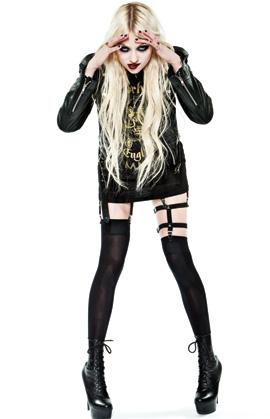 There’s definitely something appealing about a girl who knows who she is and what she’s after in life. Any comments she’s received along the way, Taylor takes simply as someone else’s opinion, and it’s her choice to take it or leave it.

As much as Taylor’s career is about this personal journey she’s on, her powerful voice capturing the trials of life in her songs, it’s also a lot of hard work, so much more than just punching the clock. All the effort that goes on behind the scenes to create the finished product that we as the audience get to enjoy, takes hours and hours of creative thought, planning, and practice.

“I work 24 hours a day, every day,” says Taylor, smiling about her workaholic ways. “The more successful you become, the more work there is to go along with it. It’s great, but you have to really love what you’re doing because it is a lot of work. But I love what I’m doing.”

Any area of the entertainment industry is difficult, no matter how glamorous it may appear. Taylor advises anyone looking to go into music to be completely sure it’s the right path. “Don’t do it if you don’t need to,” she says. “It’s a lot of rejection and, if you do it, it’s because you need to.”

It may be a mountain of work, but the end result is beyond worth it. While some may view her success in terms of the fame she has achieved, she’s less inclined to measure it the same way. “I don’t put fame and success in the same category, although they go hand in hand. Success is being able to do what you love and have people like what you do, as opposed to just being famous,” she tells me. “As long as I get to do what I love, I’m happy.”

Being true to herself, with the many sides of her personality, is a big part of getting to that level of success where she can truly be happy. “It’s all you’ve got; who you are and the way you are is great. Just because the people around you might not think it, or a certain person may say something, [doesn’t mean] they’re any better than you are.”

So, when all you have is who you are, you either show the world or cover it up. And your decision to hide or shine will determine your list of regrets in the end. Not that mistakes won’t be made along the road, either way, but when you choose to embrace the multi-faceted aspects of your identity, your life is less likely to be filled with “I wish I had,” and more likely to be overflowing with “remember that time.”

For Taylor Momsen, looking forward is the most important thing to focus on. “No regrets,” she says. “I like where I am right now and I just keep pushing forward.” 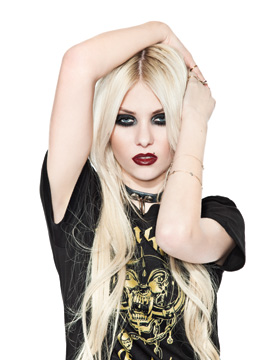 Is there any one country that has inspired you through your travels?

TM: Honestly, all the countries we’ve been to have been inspiring…. It’s been an amazing experience, so far. The UK is unbelievable every time we go over there. And we were just in France—it was amazing. You get a different vibe from every city, let alone a country. It’s really an amazing job to be able to have.

How do you find traveling influences you as a person?

TM: It adds such perspective to what you know. There are definitely times when you miss home and you’re like, “I’m tired, I just want to be in my own bed.” But when we’re on a tour bus, that’s my favourite place to be because the tour bus really becomes a home—it’s a moving home. You’re waking up in a different city, in a different country, every day. It’s amazing, but hopefully I’ll have time to go to all those places just for pleasure and be able to really experience the cities, ‘cause when you’re on tour, you only see so much.

What inspires your style?

TM: I try not to emulate any one person; I think that’s what’s so fun about fashion. There are so many things you can do with it. You can make it your own. But I’m very inspired by the ‘60s and that whole era.

What is a must-have fashion trend for summer?

TM: My style stays the same year-round, with variation of layers. I’ll have to find some new dresses for the summer—that’s what I’m looking for.


One thought on “Faze Interview: Getting To Know The REAL Taylor Momsen”