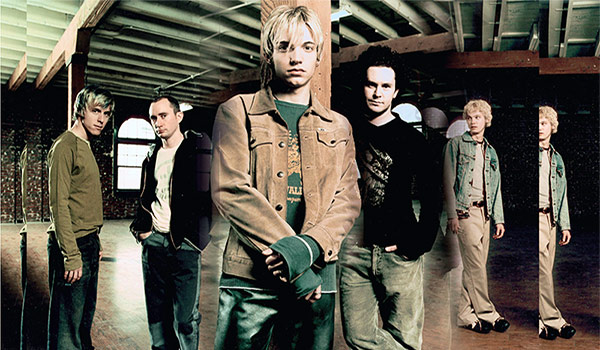 They are the California based quintet, founded by lead singer, Alex Band, and guitarist, Aaron Kamin. As you probably well know, they have skyrocketed into the radio stratosphere with their first single and recently released “Adrienne”, but it took a lot to get them where they are now.

According to the Oxford dictionary, a ‘calling’ is an inwardly felt call or summons; a vocation.

Says Alex of their calling, “I knew right away this is what I was put on the planet to do.” But turning your calling into reality is not as easy as it seems – without support and understanding it may seem next to impossible to get on the road to “Wherever You Will Go.” Upon being signed, Alex remembers that, “I had to leave school [in grade 10] and all my teachers said I was wasting my life. It never bothered me though; my Dad did the same thing and became very successful. I always had my parents’ support.”

“I always loved music, but I just didn’t think that I was up to slugging it out in bars and clubs for years – your typical I got signed 10 years later story,” explains Aaron of the uncertainty of success. He was brought up to appreciate music, but not to take it too seriously.

So how do you go from not taking it too seriously to being taken very seriously? PERSISTENCE. It was essential in pursuing their goal: they had a neighbour who was a record company exec. and every morning they placed a demo tape in his mailbox – until he finally took notice.

Alex and Aaron knew that dedication to a goal was essential for success so one of their biggest problems in forming the band was that many people their age did not share the same focus and motivation. “Our drummer was like 58. We got old guys in the band because my friends at school were either too stupid or too busy and didn’t want to dedicate serious time,” Aaron recalls.

But their drive and determination paid off as they began the process of recording Camino Palmero with new members Sean, Billy and Nate. Sacrifices were made to reach their destiny as Aaron left pre-med at UCLA and Alex left his friends behind.

So next time you feel those butterflies in your stomach, stop and ponder if you’ve found your calling. Aaron knew it because he felt “there was always some underlying real desire to succeed.” This underlying desire is what pushed them to keep trying, to ignore the nay-sayers and pursue their calling.