Decisions, decisions…time to get serious and really have fun with photography for school or as a hobby 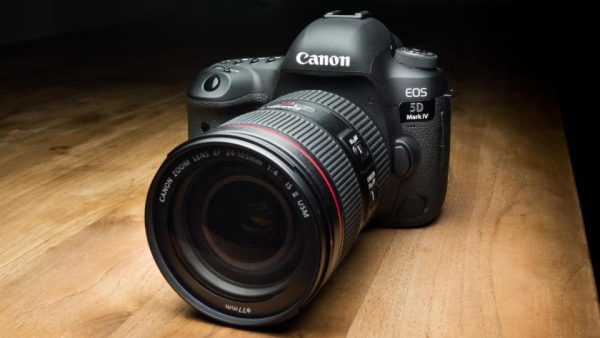 Recently I decided it was time to get a proper camera. A number of point and shoot digital cameras from Kodak, Fujifilm and Olympus had served me well over the years until rapidly improving smartphone cameras made carrying an extra camera in my purse or pocket mostly unnecessary. I’ve been using one of the best smartphones on the market for photography, the LG G5, for the past year (it was replaced by the newer LG G6 this spring) and more recently I have been testing the equally impressive ASUS ZenFone 3 Zoom.  I absolutely love experimenting with these phones’ cameras, especially when using manual mode, and they have inspired me to take photography and videography more seriously. However, phone cameras do have their limitations, especially in lower light settings, and now it’s time to take my game to the next level and enter the world of DLSR cameras.

Armed with my new passion to learn photography and the need to get a new camera, I began a long process of sorting through the many, sometimes confusing terms, options and models that face a prospective first time buyer. I bounced around from the Nikon and Canon websites to Best Buy Canada online and read countless reviews, guides, owners’ comments to make sure I was getting the camera that was exactly right for me. I then followed up with a visit to the Best Buy store a block from my condo and had a extra long chat with a knowledgeable sales rep that reinforced everything I’d learned and answered a few final questions. So, to save you a lot of time, and energy, I’ve figured it all out for you!

A DSLR camera is the digital version of the single-lens reflex (SLR) cameras that have been used by pros and hobbyists alike for a century. Using a mirror and prism system the camera sends an exact reflected image of the scene to your eye in the viewfinder. When you click the shoot button, the mirror pops up and the sensor inside the camera captures the image digitally. A new generation of “mirrorless” cameras (especially from Olympus, Panasonic and Sony) are worthy rivals to DSLRs but for many reasons DSLRs still dominate heavily with the pros and hobbyists alike, and it’s what we’ll be looking at here. Unlike the point-and-shoot camera, a DSLR camera comes in two parts, the “body” and the “lens”, meaning your can find dozens of different special lenses to suit your photography needs and budget. Higher end DSLRs are often just sold with the body (and you buy your own lenses) while the low- to mid-range cameras typically come with a standard size zoom lens, usually a 18-55mm zoom lens to get you started right away. 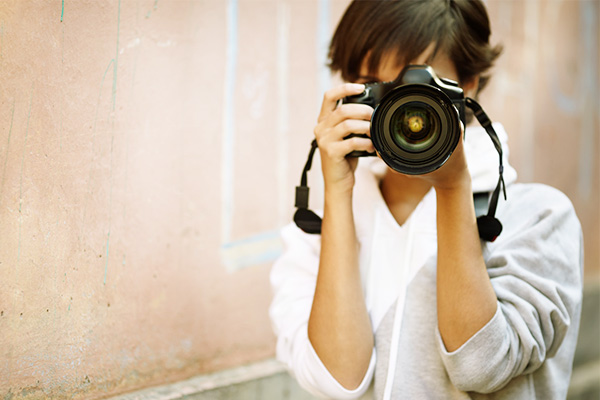 Japanese manufacturers Canon and Nikon absolutely dominate the camera world and their fans have had a rivalry that makes one think of Pepsi vs Coke, or PC vs Mac over the years. Canon DSLRs traditionally have held the edge in video and sports photography while those from Nikon have been seen as faster and having higher quality design from entry level models all the way up. However, with the exception of super expensive cinema-quality DSLRs (go with Canon) as we stand now in 2017 both brands are very evenly matched and your decision can be based on best price or any compatible gear you may already have. 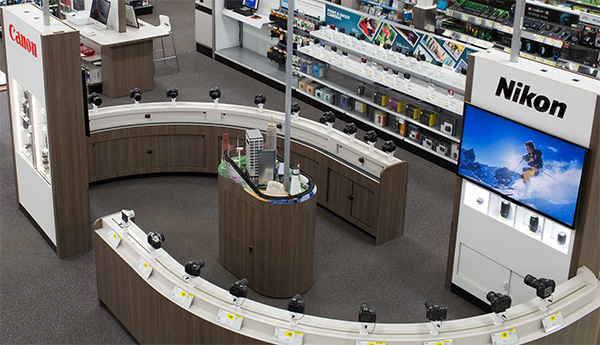 What should you be looking for?

The right camera depends on your needs and your budget. Nevertheless, it’s great to know that the lowest priced, newest DSLR camera kits from Nikon (the $600 D3400) and from Canon (the $550 EOS Rebel T6) are fabulous cameras that will take really good photos and video, and will satisfy your growth as a photographer for years to come. However, if you have a little more money to spend the enhancements may be worth it.

Here are things to consider:

The blog at Best Buy Canada, has a more in-depth look at these key features and more things to consider in their DSLR buying guide.

The latest entry level models from Canon and Nikon 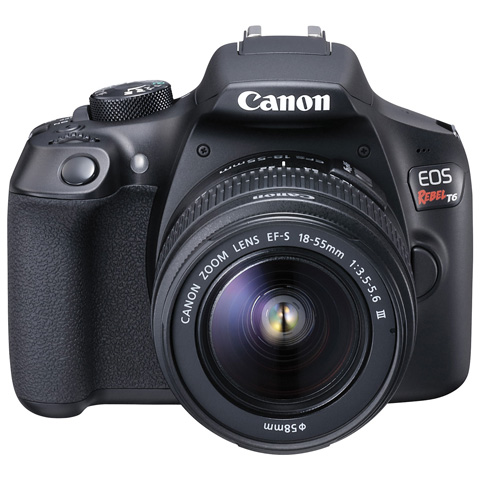 The Canon EOS Rebel T6 is the most affordable choice, with 18 Megapixels and photos at 3 frames per seconds. It’s a good all around photo camera, but lacks a bit if you plan on using it for video, having only a mono mic, no input for an external mic and no auto-focus during video It also has a fixed LCD screen that is not touch sensitive. Perfect for budding photographers on a budget. 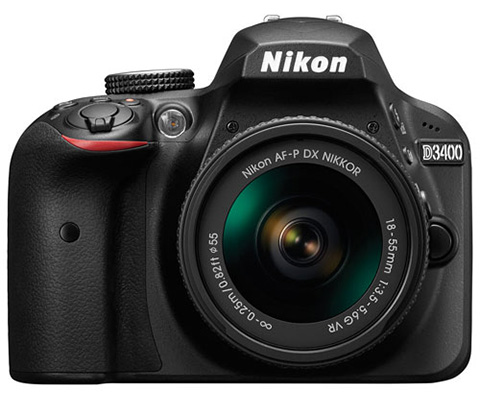 The Nikon D3400 is a bit more money, but in the entry level, it is generally considered the better model. It outguns the Canon Rebel T6 in Megapixels (24.2 vs 18.0) and frame rate (5 vs 3 per second). Like the Canon T6 is also has a mono mic and no input for an external microphone, fine in many cases, but a little frustrating if you’re using it for interviews or vlogging. Again, all things being equal, and lacking a clear preference one brand or the other, we’d go with the Nikon D3400 at the low end, for a little more money. 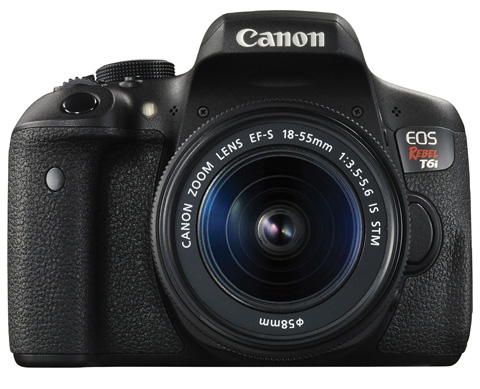 Moving up to the next level in both brands gets you to a very happy place, especially for video. The aforementioned missing mic input, built-in stereo mic, WiFi connectivity, touch and swivel LCD screens are indispensable once you’ve started using them. With the T6i, Megapixels and frame rate jump to match the Nikon, and we lean a bit towards the Canon in this match-up considering it’s a little cheaper (around $100). The only real difference is the T6i doesn’t sport 60fps Full 1080p, the Nikon D5600 does. 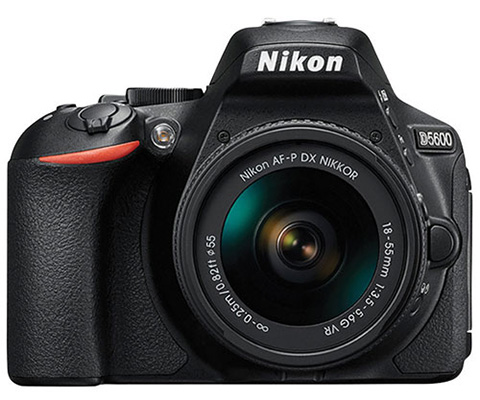 I’ve actually spent a fair amount of time testing out the previous version of the Nikon 5000 series, the D5500 and it’s a great camera. Like the Canon T6i it has Wifi and swivel/touch screens and enhanced audio options for video, including full HD 1080p video at 60fps. If you can grab this camera on sale do it, it’s a winner in it’s class. 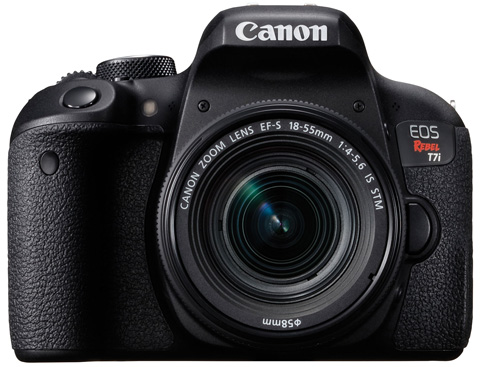 The Rebel T7i is the newest (it came out this year) and most advanced camera yet in the entire EOS Rebel line. It takes everything good about the T6i and builds from there, adding slighter fasting continuous shooting (6 fps), many more autofocus points (45), and most importantly for videographers, full HD 1080p video at 60 frame per second and time-lapse video. Oh, and Bluetooth connectivity (in addition to wireless.) A toss up with the Nikon D5600, shining a little more on a couple specs, but also $100 more (when not on sale). 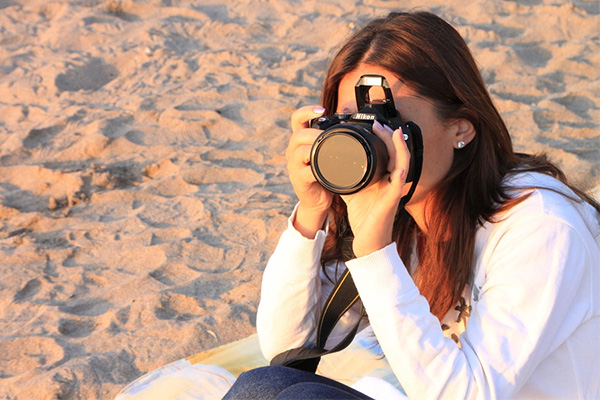 In the end I went with the stepped up entry level Canon T6i, on sale on at Best Buy, partly because I already had a sweet 75-300mm Canon lens from a 20-year-old EOS film camera that was completely compatible with today’s digital EOS models.

To everyone getting into photography out there, enjoy the journey and happy shooting!

This post was written after researching DSLR cameras for a sponsored post for Best Buy on outfitting your home study space with their wide range of back-to-school product offerings! 🙂 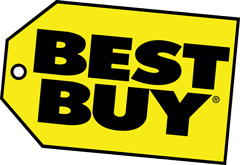 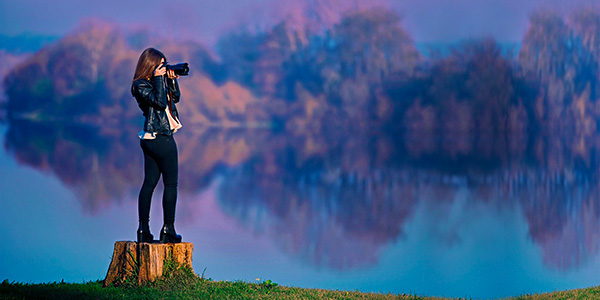 Figuring out the Canon and Nikon model numbering systems

The first thing I noticed when I got onto the Best Buy’s DSLR camera page was a whopping 72 choices from Canon and Nikon with prices ranging from $350 to $5250. While more choices can often be better, it was going to require a bit of work to figure out which model was the right one for me.