Jasmin Glaesser is like any ordinary university student—except she happens to be an Olympic cyclist too. From life on the road to winning bronze at the London Games, one thing remains: her passion. 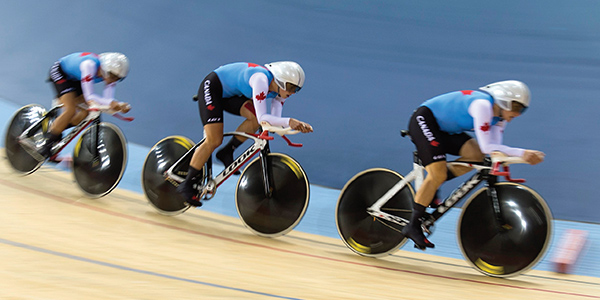 When Jasmin Glaesser thinks back to a particular competition, she can’t remember what was racing through her mind. The Olympic cyclist remembers the nerves—yes, those are naturally there—but once the race starts, instinct takes over and she doesn’t have to think anymore. “You just do what you’ve been training to do,” she says. “I always love the feeling of being in a race as soon as it gets going.”

Since Jasmin trains in road and track cycling, she requires a diverse skillset. Road cyclists race from one point to another on a circuit longer than five kilometers. Teammates work together to pace one another, exchanging the lead to provide protection from the wind or to open a gap and gain advantage. In track cycling, racers cycle around a velodrome and the fastest qualifier wins. At the beginning of the race, riders pedal slowly, watching one another and waiting for an opening to strike. While road cyclists rely on endurance, track cyclists require tactical skill.

Jasmin is speaking to me over Skype all the way from Europe, where she’s competing in Belgium’s Lotto Belisol Tour. She doesn’t know it yet, but in two days she’ll win the Sprinter’s Jersey and her team, called TIBCO, will secure second place in the team classification. The Canadian athlete isn’t a stranger to winning. In 2012, she competed in her first Olympic Games, in London, winning bronze in the team pursuit with Tara Whitten and Gillian Carleton. She hopes to be on the top step at the 2016 Olympic Games.

But Jasmin’s surprisingly new to the sport for someone who seems to be dominating the podium. She didn’t discover cycling until about four years ago. She was active in everything from track and field to figure skating, but cycling was what stuck. “I’ve been passionate about  sports since I was little, but I was never particularly good at anything,” Jasmin laughs. “I started cycling because I loved it—that’s what drove me initially. From there, you just have to focus on the process and you can’t think too far in advance. You have to look at the small things you can do to get a little bit better every day.”

The 2011 Pan Am Games were a turning point because she consciously decided to take her cycling to a competitive level. “I remember training for that and I realized it was a really big opportunity,” she says. “I had to make the decision to commit 100% to what I was doing.”

Jasmin is still able to balance her schoolwork with cycling. She’s currently studying computing science part-time at Simon Fraser University, where her dad is a professor. In the future, she hopes to blend her passion for sports with her degree in technology. In the meantime, she’s enjoying the road and becoming closer to her teammates. “You see them at their best and you see them at their worst, but it really brings you closer together,” she says. “It’s nice to know it’s not just you out there. When you feel that connection with your teammates, it motivates you to do your job that much better.”

One standout moment was at a previous race, when just about everything went wrong. Jasmin made a quick bathroom trip and when she came out, 200 cyclists zipped past her. She realized that they started the race early. She ran back to her bike and upon cycling around the first corner she saw her teammate was stalled with a broken bike. Despite the havoc, their perseverance paid off and the team came in second place. “You just have to make the most of it!” she laughs.

One of the most popular questions Jasmin gets is what advice she can give aspiring Olympians. Apart from the skill level, you must have passion and perspective. Her personal coach, the late Jeremy Storie, once told her, “If all you do is cycling, it’s going to be the hardest thing you do in your life.” What he meant was that she should keep perspective about what she’s doing and vary her interests. “At the end of the day you have to remember that all you’re doing is riding a bike and if that’s not fun anymore then why are you doing it?” she says. “If you have tough moments in training, and something’s not working out, you just have to remember to tell yourself there are other things to life.”

In the end, it all comes down to passion, a recurring theme in our discussion. “There’s obviously a lot of sacrifices you make as an athlete, but when you decide the reward at the end is worth it, then it’s easy.” 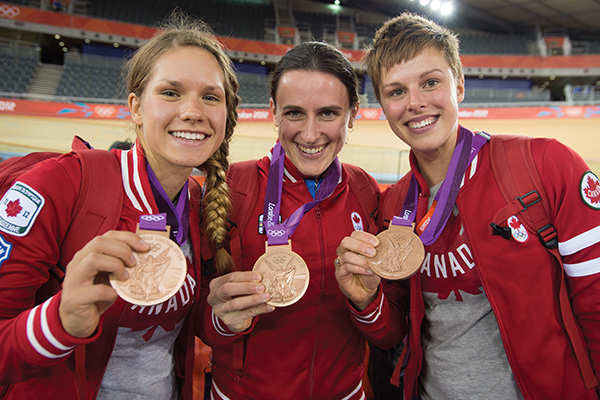 Just in time for the 2015 Pan Am Games in Toronto, Canada will be home to a world-class indoor velodrome. The 250-metre oval cycling track is currently being constructed in Milton and it will be the sole facility of its kind in Canada and only the second that meets top international standards for cycling in North America.

The Canadian track team (which currently trains in Los Angeles) will finally be able to practice on home turf, close to their family and friends. “I can’t wait to actually train in my own country,” says Olympic cyclist Jasmin Glaesser. “And hopefully it will inspire the next generation of Canadian cyclists.”