As JLS walked through the crowd at the 2010 MMVAs, they smiled in satisfaction as fans sang “Everybody in Love”—their own song—to them! The song has hit number one on the UK Singles Chart and they have started getting quite the buzz in North America as well. 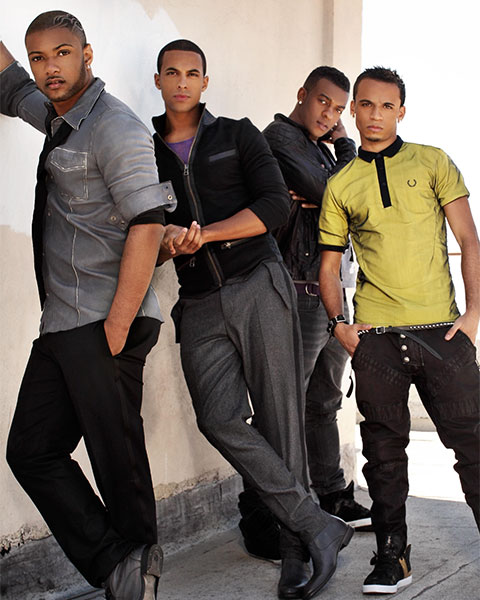 After becoming finalists on the 2008 X-Factor show (an experience they describe as “boot camp for the industry”) and signing with Epic Records at the beginning of this year, Aston, Oritsé, Marvin and JB have quickly risen to fame with their enchanting sound, determination and passion.

Nowadays, back home, the band can’t just go out to a movie without a great deal of security, due to how recognizable they are to fans everywhere. So, we asked them: do you ever go out in a disguise?

“Unless you get a proper disguise where you actually change your appearance… We’ve never done that. That’d be quite cool. To wear a wig or something,” Marvin remarks.

The four characteristics that the boys believe to be necessary to succeed in the music industry are love, ambition, determination and fight. “I wouldn’t normally say that,” says Oritsé about his word choice, “but I think in this industry you have to have some sort of fight in you because you have to. People might say no to you about a million times, but you know if you have enough fight, they may someday say yes.”

JLS still can’t believe the extent of their good fortune and these talented guys continue to devote their lives and their hearts to their music, remembering to thank their families and Simon Cowell for his support on their rise to the top. “It’s actually crazy and, you know, I think we pinch ourselves everyday because it does feel sometimes like we’re dreaming.”