Twitter-happy presidential candidate Donald Trump has tweeted, and said, some pretty outrageous things over the last year. Somehow he’s survived it all and is now well on his way to being a 50/50 possibility to take over the White House from Barack Obama. Well, guess what. There’s another presidential wannabe who’s even more delusional and bombastic than The Donald, the one-and-only Kanye West. Yes, really. Last year he announced he was running for President of The United States (POTUS) in 2020. Which gives him four more years to make entertaining statements such as the extensive collection we’ve gathered here for your reading inspiration/amusement. 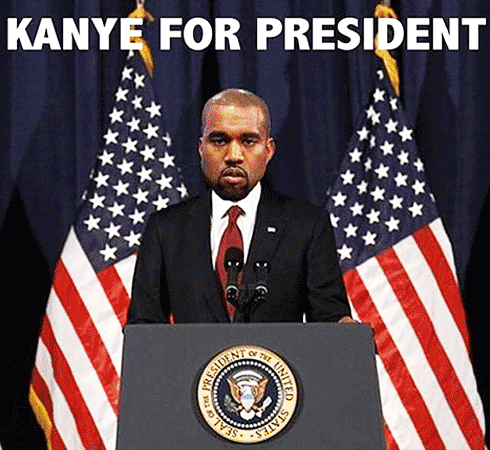 Let’s start with this one:

I don’t want to say these really big, over the top statements that end up getting quoted.

I’ll say things that are serious and put them in a joke form so people can enjoy them. We laugh to keep from crying.

We all self-conscious. I’m just the first to admit it.

Fur pillows are hard to actually sleep on.

There’s nothing I really wanted to do in life that I wasn’t able to get good at. That’s my skill. I’m not really specifically talented at anything except for the ability to learn. That’s what I do. That’s what I’m here for.

If you have the opportunity to play this game of life you need to appreciate every moment. a lot of people don’t appreciate the moment until it’s passed.

Nothing in life is promised except death.

People always say that you can’t please everybody. I think that’s a cop-out. Why not attempt it? ‘Cause think of all the people you will please if you try.

I know I got angels watching me from the other side.

People ask me a lot about my drive. I think it comes from, like, having a sexual addiction at a really young age. Look at the drive that people have to get sex – to dress like this and get a haircut and be in the club in the freezing cold at 3 A.M., the places they go to pick up a girl. If you can focus the energy into something valuable, put that into work ethic.

I am God’s vessel. But my greatest pain in life is that I will never be able to see myself perform live.

Visiting my mind is like visiting the Hermès factory. Sh*t is real.

When you’re the absolute best, you get hated on the most.

I’m the closest that hip-hop is getting to God. In some situations I’m like a ghetto Pope.

Oh my God, I’m one of the greatest rappers in the world.

I’m too busy writing history to read it.

I am so credible and so influential and so relevant that I will change things.

I’m going to be the Tupac of clothing.

I’m a pop enigma. I live and breathe every element in life. I rock a bespoke suit and I go to Harold’s for fried chicken. It’s all these things at once, because, as a taste maker, I find the best of everything.

My goal, if I was going to do art, fine art, would have been to become Picasso or greater… That always sounds so funny to people, comparing yourself to someone who has done so much, and that’s a mentality that suppresses humanity…

One of my biggest achilles heels has been my ego. And if I, Kanye West, can remove my ego, I think there’s hope for everyone.
(Uh, think we’re still waiting for that.)

I think what Kanye West is going to mean is something similar to what Steve Jobs means. I am undoubtedly, you know, Steve of internet, downtown, fashion, culture. Period. By a long jump. I honestly feel that because Steve has passed, you know, it’s like when Biggie passed and Jay Z was allowed to become Jay Z.

As a man I am flawed but my music is perfect.

I am Warhol! I am the number one most impactful artist of our generation. I am Shakespeare in the flesh. Walt Disney, Nike, Google.

I’m doing pretty good as far as geniuses go…I’m like a machine. I’m a robot. You cannot offend a robot.

When I think of competition it’s like I try to create against the past. I think about Michelangelo and Picasso, you know, the pyramids.

For me to say I wasn’t a genius, I would just be lying to you and myself.

I’m the No. 1 living and breathing rock star.

They say you can rap about anything except for Jesus, that means guns, sex, lies, video tapes, but if I talk about God my record won’t get played Huh?

I an the number one human being in music. That means any person that’s living or breathing is number two.

I liberate minds with my music. That’s more important than liberating a few people from apartheid or whatever.

So, the voices in my head told me go, and then I just walked up, like, halfway up the stage… But I just didn’t really want to take away from Beck’s moment, or the time he’s having to talk. It was kind of a joke – like the Grammys themselves.

Sometimes people write novels and they just be so wordy and so self-absorbed. I am not a fan of books. I would never want a book’s autograph. I am a proud non-reader of books.

I will go down as the voice of this generation, of this decade, I will be the loudest voice.

I hate when I’m on a flight and I wake up with a water bottle next to me like oh great now I gotta be responsible for this water bottle.

One of the problems with being a bubbling source of creativity – it’s like I’m bubbling in a laboratory, and if you don’t put a cap on it, at one point it will, like, break the glass. If I can hone that… then I have, like, nuclear power, like a superhero, like Cyclops when he puts his glasses on.

You should only believe about 90 percent of what I say. As a matter of fact, don’t even believe anything that I’m saying at all. I could be completely fucking with you, and the world, the entire time.

I believe that bad taste is vulgar. It’s like cursing. I think the world can be saved through design, because what is the most distasteful thing someone can do? Kill someone. So, good taste is the opposite of that.

I’m a designer. A musician. A manager. The media try to dishumanise [sic] people who believe in themselves.

For me, first of all, dopeness is what I like the most. Dopeness. People who want to make things as dope as possible, and, by default, make money from it.

I will be the leader of a company that ends up being worth billions of dollars, because I got the answers. I understand culture. I am the nucleus.

I am in the lineage of Gil Scott-Heron, great activist-type artists. But I’m also in the linage of a Miles Davis, you know, that liked nice things too.

I am the number one human being in music. That means any person that’s living or breathing is number two.

I paid my dues when I had to wear a kilt in Chicago, and friends would say, “What’s your boy got on?” but there are warriors that have killed people in kilts in the past.

I don’t personally like suit jackets anymore. I especially hate suit jackets on women… that was a groundbreaking idea 5 million years ago!

I like T-shirts and women in yoga pants… I live in LA that’s what some people wear… not sure why someone would put a suit jacket with that.

I jog in Lanvin.

I feel like the type of girl I would be with is a fellow superhero. So we get that “already flying and now we’re just flying together” thing.

I hate politics. I’m not a politician at all. I care about the truth and I just care about human beings.

We’ll see how long he sticks with his plan to be president…or will it be Donald Trump vs Kanye West in 2020?