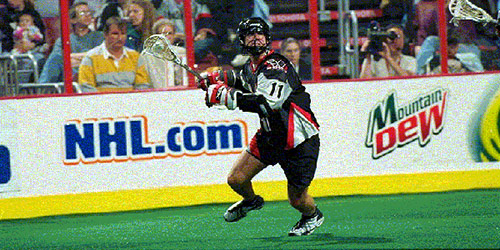 The music is so loud my seat vibrates. Below me, a group of young kids have torn off their shirts to reveal the words “Can’t Stop the Rock,” printed with red paint on their chests. Not to be outdone, a family wearing yellow hard-hats stomp their feet, shout and blast plastic blue horns.

Lacrosse, the fastest game on two feet, is responsible for all this frenzy. And with 17,059 high-spirited fans packed into the Air Canada Centre in Toronto, there’s no denying that it is one of Canada’s hottest tickets right now.

There’s just ten minutes to go during the final period of the National Lacrosse League home opener. The game has Toronto Rock battling Albany Attack for control of the field and the crowd is getting wilder by the minute. Blur’s “Song 2,” the adrenaline-buzzing tune with its familiar “Woo-hoo!” pounds from the loudspeakers overhead. A television camera pans the cheering crowd and rests on three teenage guys wearing bright red frizzy wigs. Their image is projected and scattered on the overhead TV screens as they launch into an animated air-guitar session.

Like the players, the fans have obviously also gotten into the fast-paced, aggressive action of lacrosse. “It’s important to make the game entertaining for the fans,” says Toronto Rock’s lead scorer, Colin Doyle. “We’ve really grown the game in a way that gets the kids and fans involved.” 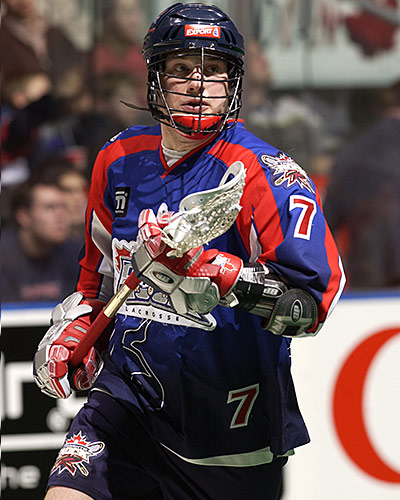 For the uninitiated, the game of lacrosse is similar to soccer. The point of the game is to put the ball into the other team’s net. Using a lacrosse stick, players attempt to gain control of the ball by scooping or catching it. Players can dislodge the ball from the opponent’s stick by checking—poking or hitting an opponent’s stick and gloved hand.

After the game, Doyle sits dejectedly, covered in sweat, on a bench in the locker room lamenting today’s loss. A trainer tapes plastic bags filled with ice to his knees and ankles. “My whole body is sore,” the six-foot-three player says. “My ankles, knees, ribs and shoulders. You go out there and for sixty minutes your body just takes a beating.”

Most of the players have been playing lacrosse for years—since they were kids—and they say it is the physical contact that got them hooked. Doyle, like his teammates, plays lacrosse for love of the sport rather than financial reward. The average lacrosse league salary is only about $22,000. Even those who play the game year-round in professional leagues still have day jobs. The low salaries keep the cost of the league down. And that keeps the cost of the tickets down—one of the other reasons why the games are so popular with fans. With single ticket prices ranging from $10 to $45, lacrosse is one of our last few affordable sporting activities.

“I like lacrosse because it combines different aspects of several sports,” says Rock defenseman Dan Ladouceur. “You’ve got the athleticism of soccer, because we’re running all over the field, and you have the action and strategy of basketball. But it’s the physical contact, the intensity of the action that really got me addicted.” 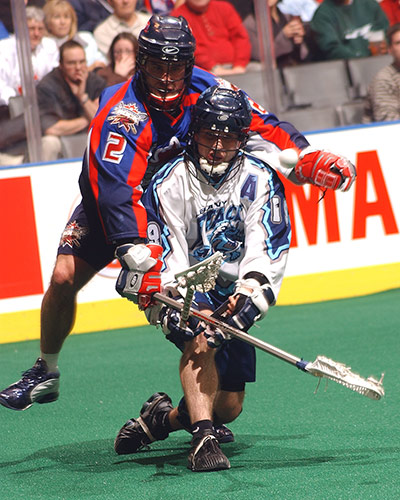 Lacrosse is the oldest sport in North America. It dates back to the 1400’s and has its roots in the life and culture of Native people. The game was a religious rite and served to train young warriors.

It did not become well known until the middle 1600’s when Father Jean de Brébeuf, a Jesuit missionary, witnessed a game of lacrosse being played by the Algonquin tribes of the St. Lawrence valley.

The Natives called it “baggataway” (meaning “ball”) but Brébeuf coined it “la crosse” after the shape of the stick, which resembled a bishop’s crosier or “crosse” in French.