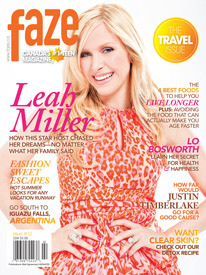 Known best as a VJ on MuchMusic and host of the hit TV show So You Think You Can Dance Canada, Leah Miller didn’t always know exactly where she’d end up. She looks back on what led her to the present, and lets Faze in on what matters to her most.

Dancing, acting and performing on Broadway were all dreams of a younger Leah. She and her sister danced as children while her brothers played sports—four kids all seemingly interested in performance.

But over time, things started to change. After attending university, her sister went on to become a nurse and her brothers both became teachers, but Leah couldn’t think of anything she wanted to go to school for. At the time, it was especially a little tough for her father, who is a teacher, to accept the idea that she wouldn’t be going to university too. “He would just push school, school, school, school,” Leah says, “but I just didn’t want to do it.”

It wasn’t the idea of school that Leah didn’t like; she just knew that she wanted to perform. What she didn’t know, however, was what type of performer she’d become. When she took dance classes, she took them because she loved dance. When she was 16 she even thought she’d love to be on Broadway but it wasn’t something she was really focused on.

“I just more enjoyed dance class and competing. Then, I didn’t want to compete anymore and I was ready to try something different,” Leah says.

After realizing that some of her goals were beginning to change, she began auditioning for TV shows in Toronto. Then, when she was about 19, she decided to move to LA and try acting.

Despite her father’s feelings about university, he and the rest of her family stood by her decision. After a couple of years passed, she began to miss them and realized acting in LA wasn’t what she really wanted to do.

“I think [for] a lot of people who live in LA, their goal is to be famous, and they’ll struggle until they’re 50 years old to do that. I just wanted to have something more stable, and I wanted to be around my family and have a more normal life,” explains Leah. 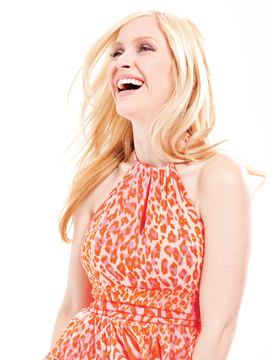 After moving back home to Canada, her father hooked her up with someone he knew at MuchMusic.

According to Leah, becoming a VJ on the show had a lot to do with luck. “I know that sounds weird,” she says, “but it wasn’t what I wanted to do at the time. When you’re young, there are so many different jobs and careers that you think you want to do, and you change so much.” After all the years of dancing, performances in commercials as a child and the time she spent in LA, she was happy landing the VJ spot. “It wasn’t something I wanted to do,” Leah reiterates, “but, here I am, you know?”

The transition from MuchMusic to being the host of So You Think You Can Dance Canada (SYTYCDC) was seamless for Leah. At Much, there are no cue cards or teleprompters, so she had to be creative and use her personality on air. Scary, yet a total blessing. She considers all the time she spent interviewing people and performing on live TV to be her university education. In turn, hosting SYTYCDC, which also doesn’t provide any prompts for her to read from, wasn’t all that scary.

“For my first show,” Leah recalls, “I was nervous, of course you’re going to be nervous, but then it’s like, okay, I know what I’m doing. I’m comfortable. And everyone is so great. It’s such a comfortable atmosphere. We’re like a big happy family.”

Family is the golden word. Leah knows that it isn’t just luck and twists of fate that brought her to where she is today. The support from the people around her is the biggest reason. “I wouldn’t be where I am if it wasn’t for my family,” Leah says, “I am who I am because of my family.”

When she’s off air, one might think she’s hanging with celebrities or hitting up night clubs, but she is far more of a homebody than a party girl. A lot of her time is spent at home cooking and baking.

“I love doing that. It’s like a thing in my family,” she says. She spends time with her sister, who is her best friend, and her one-year-old nephew. When her in-laws are in town, she hangs out with them. “We don’t do anything special. We go to the movies a lot, have barbeques at my house, we cook, have family dinners and that’s about it. We’re simple people,” Leah asserts.

The love and appreciation for her family really was something that grew as she got older. In the same way that her career goals changed over time, so did her personal priorities. 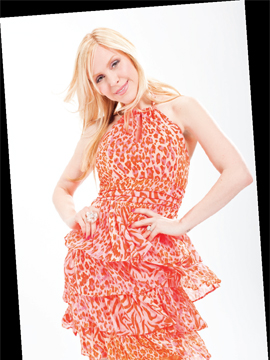 “When I was younger, it was more about me and what I wanted to do,” she says, “whereas now I’ve settled down and I’m older, and I know what’s important in life.”

Having a career that she loves is indeed important to Leah, but her family is still at the forefront of her life. “It’s not about how much money you have or how successful you are. It’s just about having really great people around you,” she says.

So how does Leah maintain the strong relationship she has with her family? Undoubtedly, no matter how close people are to one another, we’re all human and sometimes we fight, but she believes there is always a way to get through things.

“I think the most important thing,” Leah says, “is to be upfront and honest. I think the worst thing you can do is when something’s bothering you and you don’t say anything at all.”

Excellent advice, yet Leah doesn’t have all that much fighting and drama going on to apply it to. “Life is short,” she says, “and I’d rather be surrounded by positive energy than bickering and fighting.”

It’s obvious that Leah has had many dreams that came and went, and that rings true for a lot of people who are trying to figure out who they are.
Ultimately, it’s about pursuing all your interests and taking opportunities as they come your way. Leah has ended up in an amazing place and through it all, the one constant has been her family. As for her father, Leah says, “I think he’s proud of me now. I’m so lucky to have a job that I love and enjoy and be with such great people.” 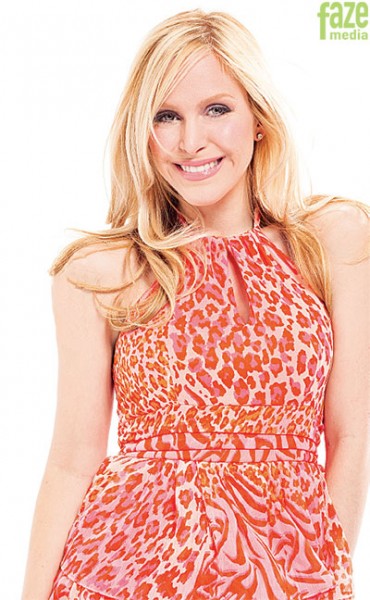 1. My idea of a perfect vacation is:
A. a quiet, isolated beach in the Caribbean, where no one can find me
B. a backpacking tour through all the tourist hotspots in Europe
C. an off-the-trail hike through the mountains of South America
D. wherever the party’s at

2. The luxury I cannot live without on vacation is:
A. my iPod
B. my cell phone
C. North American fast food
D. my entire collection of shoes

3. I would be the most devastated if I forgot to pack:
A. a toothbrush
B. makeup
C. shampoo/conditioner
D. Dallas Green

4. My favourite mode of transportation while on a trip is:
A. taxi
B. scooter
C. limo
D. camel

The best part of a vacation is:
A. the chance to relax
B. experiencing a different culture
C. tasting new, exotic foods
D. coming home

THINGS ABOUT MY TRUE LOVE
1) He’s my best friend
2) We’re exactly alike
3) He’s my husband, so I have him forever 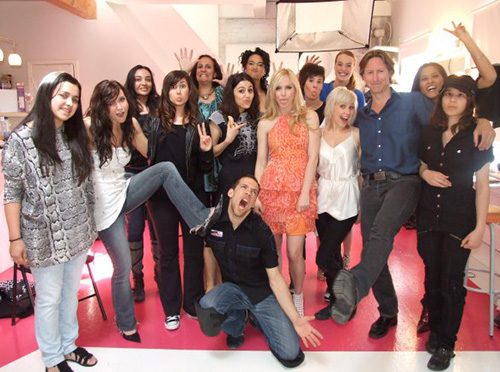 In above photos and on the cover of Faze Magazine, Leah is wearing a dress by Smart Set, part of their limited-edition RUNWAY INSPIRED Collection called “Runway Your Way.” Ring by Suzie Love and CoverGirl Boundless Color nail polish in fuchsia girl.