Fast and Furious makes it look easy. And cool. But is driving standard something everyone can and should learn how to do?

As Canadians, we live in a land of choice. How do you want your burger dressed? Where would you like to go to school once you graduate? Which movie of the 13 playing at this theatre do you wish to see?

We take for granted that we will get a say in what and how we do something. But sometimes that means opting for the easier route whenever possible—even if a little more effort would mean more return.

On a recent trip to Costa Rica, I found myself a tad stuck. I wanted to rent a car, but they only had manual transmission (or standard) vehicles available, instead of the automatic transmission cars that I’m used to. As luck would have it, my travel companion knew how to drive standard, and we were able to sign on the dotted line, and then take off on the adventure. But I was relegated to the passenger seat. Not cool. 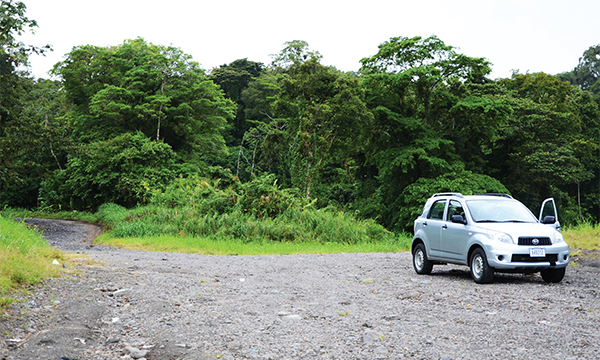 It was in this land of rainforests and gravel roads that I first attempted to drive a stick shift. Let’s just say it wasn’t pretty. Costa Rica is full of steep hills, and inclines and declines are not ideal places to learn smooth shifting. Feeling like I was learning to drive all over again in a foreign country meant that an afternoon was all I could take. I was shaky and nervous. So, I said, “I’m good. Now you take over.” I didn’t drive again for the rest of the vacation.

When you start to travel, you quickly realize that many of cars in other countries, especially in Latin America, South America, Europe and Asia, are standard, so if you know how to drive one, it’s a lot less hassle. We met a couple on our Costa Rica trip who opted for taxis to get around because neither could drive standard. It cost them a fortune. 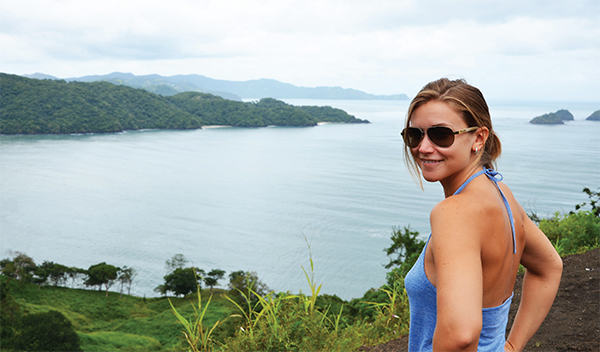 A beautiful Costa Rican landscape. But trying learning to drive a standard car in this terrain? Not so easy.

Beyond travel benefits, there are plenty of other reasons you might want to learn. Talk to anyone who knows how and they’ll be the first to tell you about the fun factor. Also, you have a deeper understanding of how the car really works and tend to pay more attention to both it and the road (mainly because you need both hands to drive so the temptation to text, eat or play with the radio is reduced). Another example, if you were to rent a PCO car in London, being able to drive standard can be important for ease of finding an appropriate car.

And then there’s the money side of things. We polled our readers and found that 73% think affordability is the most important factor to consider when purchasing a car for the first time. “For us, it’s
usually $1,000-$1,300,” says Tim Franklin, Senior Manager of Product Planning at Nissan Canada, when talking about the savings for choosing a manual car over its automatic alternative.

Tim is also my official driving instructor. When I asked him what to look for in a teacher before we began, he told me that above all, they need patience. I remind him of this from my position behind the
wheel of his company’s brand new Versa Note. He laughs. 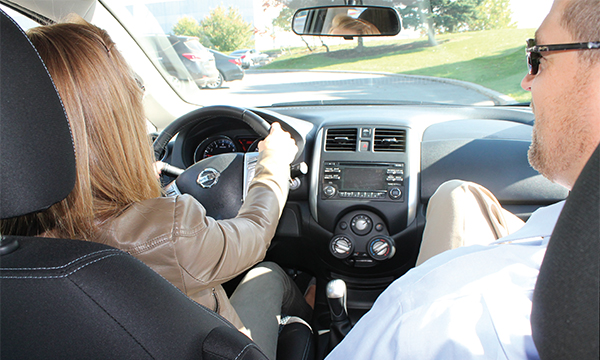 My lesson with instructor Tim Franklin from Nissan.

We go through the basics first: identifying the shifter (which controls which gear you’re in), the clutch (which moves the transmission between gears) and the movement that I’ll need to perfect in order to transition into first gear—once my right foot is off the brake, but the left is still pressed down on the clutch, the left needs to gently come off the clutch while the right simultaneously pushes on the gas.

Sound complicated? It is kind of like patting your head while rubbing your stomach. It feels weird at first, but it just takes practice.

First gear is the most difficult to master, so we start off in a parking lot practising neutral to first, again and again. It’s a far cry from the steep gravel roads of Costa Rica, so I am grateful for the slow start. But, as I start to build my confidence—and Tim has fewer bobble head moments from my frequent stalls and jerky shifting—we head out onto the road, and I get to try my hand at the higher gears.

The toughest part of the whole experience? Going in reverse. I silently wonder if there’s a life metaphor in there somewhere.

On average, it only takes someone only one and a half to two hours to get the basics of driving standard and from there, Tim advises about a week of practice in order to feel really comfortable. You start to listen to the car and—weird as it sounds— feel when you need to shift. No, really. You do feel it. I don’t make this stuff up.

Though I’m now nowhere near the cool caliber of Fast and Furious drivers, I have the basic knowledge and confidence under my belt that will make my next trip a very different experience: one I can have from the driver’s seat (of life).

And, okay, I do feel a little cool.

Don’t have a friend or relative that can teach you to drive standard?

There are schools that specialize in teaching manual driving to beginners. Here are a few: 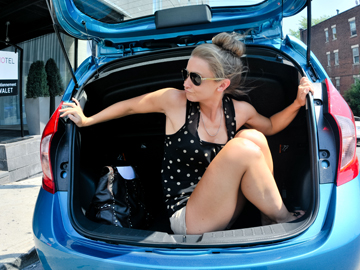 Don’t get stuck in the trunk. Be in the driver’s seat of life.
Photo of Dana by Benoit Desjardins, courtesy of Nissan.