If you’re having a particularly bad day dealing with home work or are stuck at home baby-sitting your pesky brother, consider this:

Today, over 11 million children under the age of 15 living in sub-Saharan Africa have been robbed of one or both parents by HIV/AIDS. Seven years from now, the number is expected to have grown to 20 million. At that point, anywhere from 15 per cent to over 25 per cent of the children in a dozen sub-Saharan African countries will be orphans – the vast majority of them will have been orphaned by HIV/AIDS. (Unicef Canada)

Fifteen-year-old Febbie is doing homework at her neighbour Barbara’s home. Any similarity between her and your average North American teen ends there. Febbie has lived by herself in her family home since her parents died of HIV/AIDS, and her older brother abandoned her soon after. Barbara, who has five children of her own, also cares for her nephew (whose parents died of HIV/AIDS), and pays Febbie’s school fees. Febbie’s story is becoming increasingly common, as generations of children in sub-Saharan Africa whose parents have succumbed to HIV/AIDS have been orphaned. These children often find their way to orphanages, but if you’re the oldest sibling, you’ll find yourself trying to earn a living to support your siblings or whatever remains of your family. 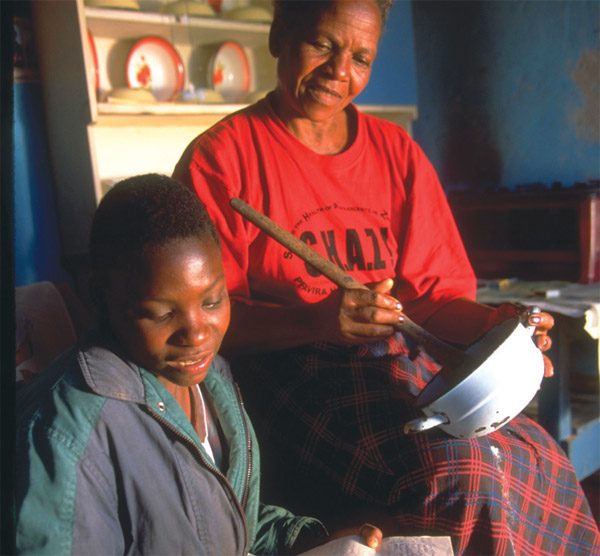 Children who have lost their parents are deprived of the basic rights to live and grow in a family environment, which is crucial for self-identity and self-esteem. Orphans are cared for by society, and it is the responsibility of the community to care for them. But in sub-Saharan Africa, with the growing number of deceased parents, extended families and foster households are often incapable of caring for orphans, where eight out of every 10 children have lost their parents to HIV/AIDS. If you must earn a living to feed yourself or pay your school fees, what would you choose? Older siblings — although only one percent — temporarily head a household during their parents’ illness and carry on taking care of their siblings till relatives decide how to care for the orphaned children. Such is the looming pandemic in sub-Saharan Africa. And never mind education. These children face basic challenges we take for granted: a place to call home and three meals a day.

Thirteen-year-old Patience lives in a small village, an hour north of the capital city of Harare in Zimbabwe. Patience lost her mom six years ago, and her dad abandoned the family when Patience’s mom first fell ill. Patience then moved in with her aunt, but two years ago, when her aunt was unable to feed her, Patience started living on her own, surviving on support from a local community group. Patience should be in high school next year, but there’s no one to pay her fees. She is able to afford only two meals a day. 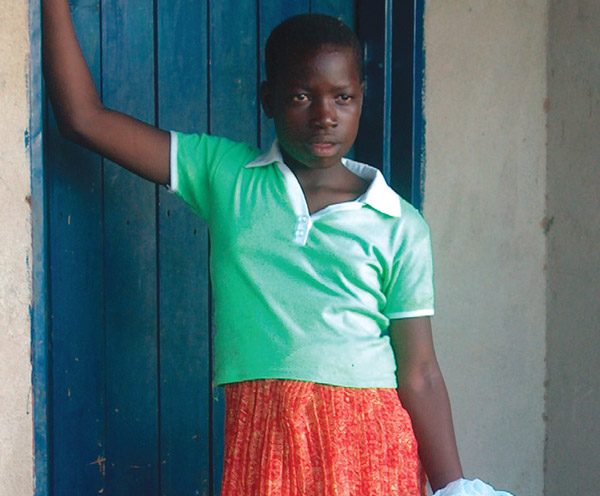 Patience’s vulnerability to being exploited increases everyday. A drive around Harare, Zimbabwe, at night shows one of the ugliest faces of the losing battle against AIDS: teenage prostitutes are commonplace. Youth orphaned by AIDS are especially vulnerable to exploitation, as they are forced into unsafe labour or the sex trade as the only means to make money to survive. (Photo credit: UNICEF Canada)

In families where there is sickness, and help is needed to take care of a relative, girls are often the first ones withdrawn from school to look after the ailing. And the death of a parent makes teens like Patience extremely vulnerable to exploitation. They may be forced into unsafe labour practices where they may be forced to work long hours under dangerous conditions in exchange for food. Some are sent away from home, exposing them to stigma and stress. As options to earn a living decrease, girls are further vulnerable to enter the sex trade as the only means to earn a living. This, in turn, increases the exposure of yet another generation of youth to HIV/AIDS.

The ravages of HIV/AIDS on the youth of a country have far-reaching consequences. The next generation is driven deeper into poverty, as they are unable to get an education and are forced to earn a living instead. Governments in certain African countries struggle with health budgets, which are stretched, trying to meet and provide life-saving drugs to the already affected. After that, there’s not much left to plan ahead with, especially to support children. And then there’s the visibility factor. African traditions of community support and extended families living together makes it harder to spot orphaned children. Most emotional and financial responsibilities are taken care of by communities. Surveys in urban centres in Zambia show that only one third of households with orphaned children actually receive any kind of governmental support. 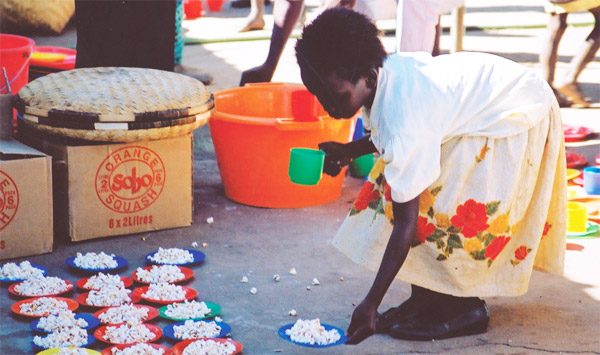 A young girl reaches down to get her snack of popcorn and a drink at SASO-Salima AIDS Support Organization in Malawi. SASO is a UNICEF-funded project serving Salima and 70 villages in the surrounding area and is run by the first woman in Malawi to publicly admit to having AIDS. It is a mix of support volunteers for the terminally ill, caring for children orphaned by AIDS and projects like gardens/small agriculture projects. Children orphaned by AIDS visit the project on Saturdays, where they have a chance to express themselves through drawings and for the younger ones, ‘memory books’ about their parents. There is a counselling service and an optional HIV/AIDS testing service. They receive popcorn for snacks and a full meal for lunch. (Photo credit: UNICEF UK/EPSTEIN)

LET’S NOT GIVE UP YET

Don’t lose hope because there are people out there making adifference, taking it upon themselves to amend small matters that may help the bigger picture. Offering free, basic education will ensure girls like Febbie and Patience can continue their education without being forced out onto the streets. Building safe places for children who are displaced is another way to prevent abuse at the hands of strangers. Providing financial and other kinds of assistance to a household, so that families can continue living together, is another way that aid agencies are trying to keep children with their loved ones. Most importantly, raising awareness amongst children and supporting them is the national responsibility of a country. 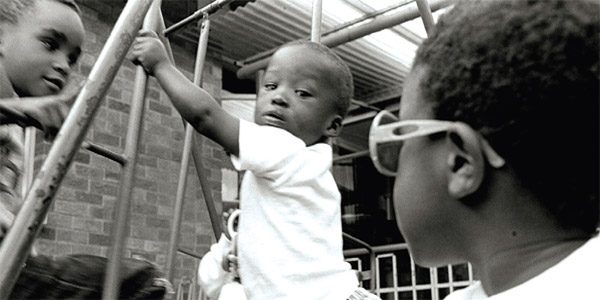 At the Cotlands Children’s Home in Johannesburg, South Africa, children play on the swings. The children have been abandoned or orphaned because of AIDS. (Photo by John Robinson, courtesy of Canadian International Development Agency) 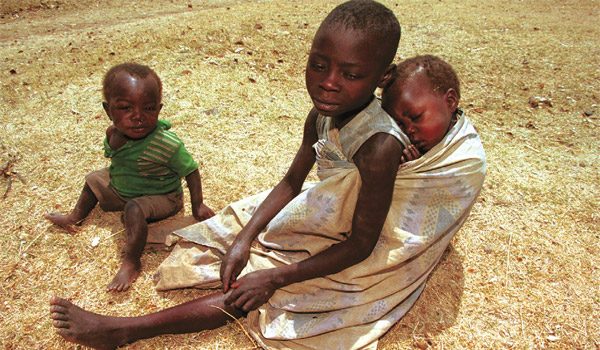 An exhausted young family of AIDS orphans arrives in Nkana Khoti Village in Malawi where food aid is being distributed. The children’s parents died of AIDS. (Photo by Clive Shirley, courtesy of Canadian International Development Agency) 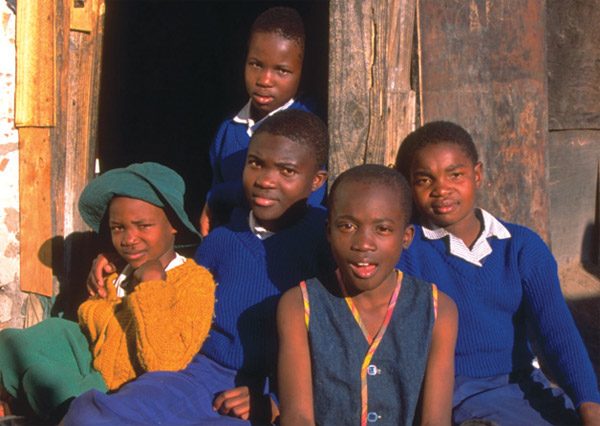 Children sit together in the doorway of the small, one-room wooden shelter they call home, in Zimbabwe. The household is headed by Eustice (seated, second from left),19, who cares for herself, her two siblings (one not present), and her older sister’s three children. Eustice’s parents and her older sister died of HIV/AIDS. (Photo courtesy UNICEF Canada/Giacomo Pirozzi)