To find the answers to some of life’s more difficult and interesting questions like “Who is the most influential female in music in the past year?” sometimes you’ve got to go to the experts.

So, where better to find the answer to such a question than our favourite MuchMusic VJs? Six well-informed, knowledgeable, and often quite differently opinionated VJs spent some time with Faze and shared their picks. 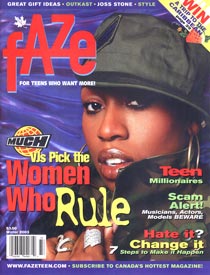 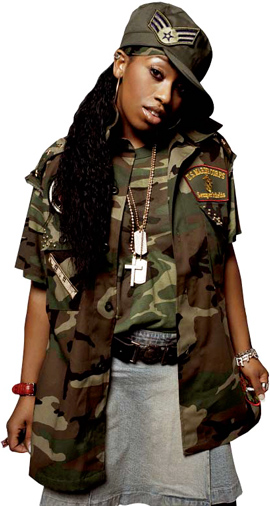 “By influential I mean she influences music, regardless of style or being sexy, or setting clothing trends (that’s not to say that she doesn’t have great style because I think she does). She has worked with great directors, and made really forward thinking, highly innovative videos. Popular music doesn’t have to be dumb: Missy is smart and so is her music. I think her sound will really influence people today, and it will continue to leave a legacy, whereas I don’t think artists like Avril Lavigne and Britney Spears are leaving behind a lasting impression. I think Missy is really innovative because she doesn’t fit into the beauty mold, which is very narrow and rigid, yet she is recognized and has won a lot of awards. Basically she’s got it all; she’s extremely talented. She’s just an all around cool lady.”

“She’s not your typical female in music: she’s not a size two, and it’s about her talent not about what she has to offer in terms of the size of her breasts or the tightness are her abs. I had the chance to talk to her this past year and she’s very comfortable with who she is. She is so confident in herself she doesn’t feel the pressure of caving in to what society says a typical female artist should be. You can be who you are. People don’t have to define who you are as a person. She grew up in a situation where she could have gone the opposite way but she always believed that she had talent, and even though people told her to lose weight, she came out with a video where she’s wearing a plastic bag and the plastic bag is inflated. She also has her own label that she runs, she has discovered many great artists, and on top of that, she produces for artists that have gone on to sell millions of records.”

“Missy is influential because Missy is unique. I define influential as the impact someone has on other people. You haven’t seen it yet but it’s Missy Elliott. Missy and Timbaland’s beats are going to keep rap interesting over the next couple of years. Missy is one of the few artists that does what she does without sounding like other people. Nobody’s done what Missy Elliott’s done because they can’t. She still breaks down barriers, and doesn’t fit the mold. I think the reason she’s so influential is because Missy is a true artist. Peoplecan’t find the next Missy Elliott, like you can’t find the next Van Gogh; you just have to look for someone who is good. You’re never going to be able to do what she does because she is one of those people, those truly gifted people. I think she’s more talented than anybody out there, regardless of gender.”

“She is one of those people who make their mark by being different and going against the grain. I chose Norah because she did what moved her, which is completely different from what’s going on out there right now. She broke down all age barriers and appeals equally to males and females. Norah is true to her art and believes in what she is doing, and only listens to herself. The recognition that she got at the Grammys is amazing because she came out of nowhere and appeals to everyone!”

“I think influential means artists that are creating something that people are inspired by, and it could be the music, their style, or even a message within the music. In terms of style I think young girls are really influenced by Avril Lavigne. She’s this power figure in terms of her personality, her attitude, and her fashion sense. I think the one artist who is influential in terms of her music is Missy Elliott. She’s very innovative, creative, and unique. Missy does things that artists have never done before and she’s breaking new ground. Pink is an artist that has both of these worlds: her music is very influential and a lot of people love her style as well. “Pink is always reinventing herself. She’s constantly changing her sound and look.” A lot of artists these days stick with one thing but with Pink she’s always looking to change and be diverse. An artist that can do that and still be successful is kinda cool.

“To me influence is the power behind trends; trends in sales, music, videos, and in youth behaviour. We should always be thinking of what women are breaking through, and whether they know it or not, that they’re paving the way for other young women coming up. A young woman fully clothed performing at the Grammys was groundbreaking. To be a woman in music it’s expected you have to be a little sexy, and Avril threw everything out the window, turned everything upside down, and became the anti-Britney. The fact that she can call the shots is really exciting to me as a female. In terms of her music, whether you like it or not, charts are an indication of influence. People, at a time where it’s so easy not to buy music, are buying Avril’s album. You can’t ignore that. The top three albums last year were The Eminem Show, Nellyville and Avril’s Let Go. That’s unbelievable. Talk about influence and she’s from Napanee, Ontario!”

In case you haven’t smiled today, here are your fave MuchMusic VJs responses to some of our crazy questions.

1. Who would you want watching your back in a fight?
2. Who would you invite to a slumber party?
3. Who’d spend more on their pet than their boyfriend?
4. Who’d bring a stylist on a camping trip?
5. Who deserves a Grammy for Best Female Artist?
6. Who should be arrested by the fashion police?