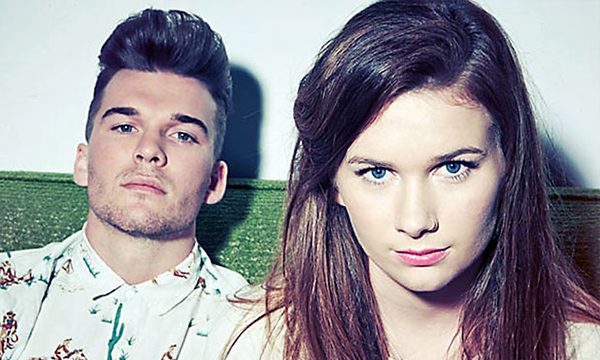 As first-timers to Canadian Music Week, New Zealand brother-sister duo Broods brought their unique sound and contagious energy to the Underground at The Drake Hotel.

Made up of 19-year-old Georgia Nott and 21-year-old Caleb Nott, Broods takes electronic pop music to another level with their intricate and dark arrangements, which Georgia describes as “emotional down-beat pop music.”

They released their debut self-titled EP this earlier this year. The six-track album features songs including “Pretty Thing” and “Never Gonna Change.”  They have been working closely with Joel Little, who produced megastar Lorde’s debut album.

With the success of their hit single “Bridges,” Broods has quickly risen onto the radar in the music industry. “It’s pretty whirlwind. It’s hard to get used to because it’s all happening so fast. It’s really exciting,” says Georgia. “We’re grateful that we’ve been given this opportunity to do what we love.”

Their passion for making music is what keeps them going. “I’ve never really put as much of my heart and soul into anything else apart from music and writing,” says Georgia. “So to get to do this as a full-time career is incredible.”

The talented pair grew up making music together. “Some people think that spending three to four hours everyday of the week with your sibling would make you want to rip your hair out but it’s not actually that bad,” says Georgia. “We’re super supportive of each other and we’re not really clashing or competing.”

They have some advice for other young, aspiring musicians. “You’ve got to be confident,” says Georgia. “You can’t be afraid of anything. Just do it, and do it fearlessly.” They’re currently working on a debut full-length album, which they’re aiming to get out this coming fall.

Broods is just one of the acts proving that Lorde isn’t the only young music talent coming out of Auckland, New Zealand.