Canadian Music Week is great for showcasing homegrown talent. HIGHS is one of the local acts that got a lot of buzz going during the festival. 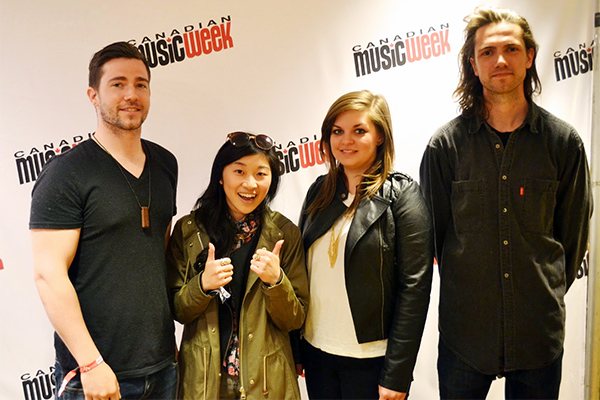 The band is made up of Doug Haynes, Joel Harrower, Karrie Douglas and Kevin Ledlow. The Toronto-based band had three scheduled shows during CMW at Hard Luck Bar, Sneaky Dee’s and The Dakota Tavern.

They took part in CMW last year, but were looking forward to getting to play more shows this time around. They released their debut self-titled EP in July 2013, which features five positive and upbeat tracks, including “Fleshy Bones” and “Harvest.” They produce bright alternative pop songs with afro-beat influences, perfect feel-good tunes for a summer soundtrack.

Their song “Nomads” off the EP can even be heard in the trailer for the upcoming film Adult World, featuring Emma Roberts and John Cusack. “It’s really strange to hear your song playing while you watch John Cusack on the screen,” says Doug.

When it comes to their live performances, HIGHS are full of energy. They hope the audience dances along with them and leaves pretty sweaty.

“We enjoy playing the music and also playing together as a band,” says Doug. “I think that is communicated while we’re playing and that can be contagious, which is the goal. We want everyone to enjoy themselves as much as we are.”

Their advice for fellow aspiring musicians is to prepare for every aspect of the industry. “If you want to be a musician all the time, you have to be ready to run a business,” says Joel. “For some musicians, that’s not what’s going to make them happy, but for us, we enjoy that as well.”

The band’s name, HIGHS, is a reflection of their overall outlook. “It encompasses this positive message that we’re aiming for,” says Karrie. “We felt the name reflects the sound that we were creating.”

The group hopes to tour a lot in the future, but for now they’re living in the moment and enjoying things as they come. “We just want to go where we go,” says Doug. “We’re going to let it do its thing.”

Take a listen to HIGHS and their song “Nomads.”