In 1992, 15 million people were infected with the HIV virus and 980,000 children became orphans after the disease stole their parents. Today, more than 42 million people are living with HIV/AIDS worldwide, with over 13 million children globally victimized by the disease, most of whom live in Sub-Saharan Africa.

Recent reports estimate there could be 40 million to 100 million orphans by 2010. “It destroys the poorest countries in the world, and they don’t have the budgets for the kind of health care they need,” says UNICEF Canada’s Beth Berton-Hunter about the HIV virus. Initially, local African governments didn’t help the situation by denying its existence, and while they now admit it is a “problem,” basic medical care and assistance are still out of reach of ordinary citizens.

Treatments widely available in North America can prolong the lives of HIV/AIDS patients and help prevent the disease from passing on, but high costs of the treatments often mean sufferers in poorer countries cannot afford the drugs. HIV “cocktails,” a mixture of 15 to 20 different drugs tailored to each patient, can cost up to $15,000 — a lifetime’s worth of savings to some.

Fortunately, research and time have brought results. Azidothymidine (AZT), an earlier generation drug that helped prevent mothers from infecting their children during birth, was expensive at $100 per treatment and still wasn’t quite doing the job. Today, there are cheaper and more effective drugs like Nevirapine, which can cost as little as $4 per treatment.

Although progress is being made to educate the region, many remain ignorant about the disease. Thirty per cent of young women believe that a healthy-looking male couldn’t possibly be infected with HIV, while some infected men believe having sex with a virgin can cure them. And so, the best investment of money may not be in treating the disease, but in preventing it. Education campaigns have proven to be successful in stopping the spread of the virus. In the early ’90s, when 15% of the population of Uganda was infected with the disease, the government ran an extensive education and condom distribution campaign. In 2003, only 6% of the population is infected.

Education is effective, and seems to be the latest solution that may just bring a region back from a devastating crisis that is destroying lives, families and futures. 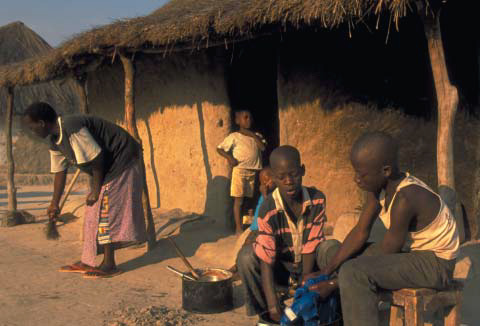 While a woman sweeps and another child stands nearby, (left-right) brothers Richard, 10, and Daniel, 12, wash clothes outside the house where they live in Zambia with a foster family since being orphaned by AIDS. 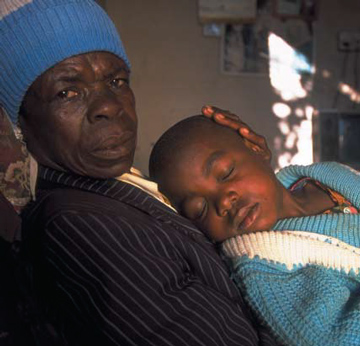 Cecilia holds her sleeping granddaughter. Florine, 6, is the youngest of six grandchildren whom Cecilia cares for, following the deaths of both of her daughters from AIDS. Cecilia ekes out a living selling dried fish. 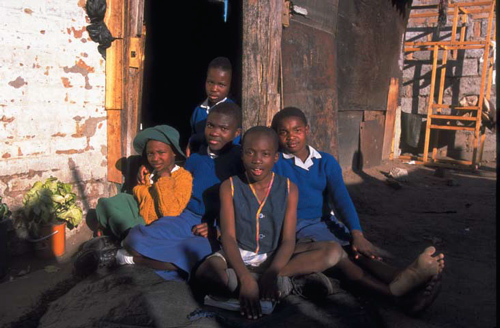 Children sit together in the doorway of the small, one-room wooden shelter they call home, in Zimbabwe. The household is headed by Eustice (seated, second from left), 19, who cares for herself, her two siblings (one is not present), and her older sister’s three children. Eustice’s parents and her older sister died of AIDS. 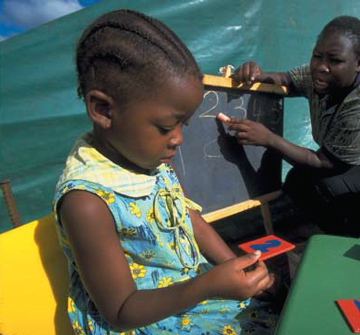 A girl in a kindergarten class at the ‘Shining Star’ drop-in centre for orphaned children in Botswana, learns to count using numbered tablets. Most of the children at the centre have been orphaned by AIDS. 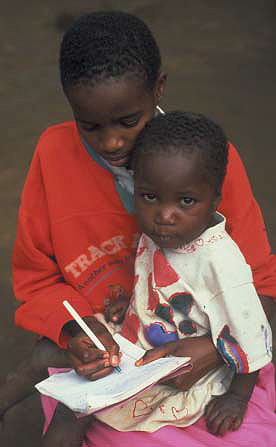 Her toddler sister on her lap, Christine Birungi, 12, does her homework outside their house in Kitintale, Uganda. Christine and her five siblings lost both parents to AIDS. The eldest girl in the family is 19 years old and has a two-and-a-half- month-old baby.

For more information on HIV/AIDS, Orphans in Africa and what you can do, visit:
AIDS.org: www.aids.org

All photos supplied by UNICEF/Giacomo Pirozzi