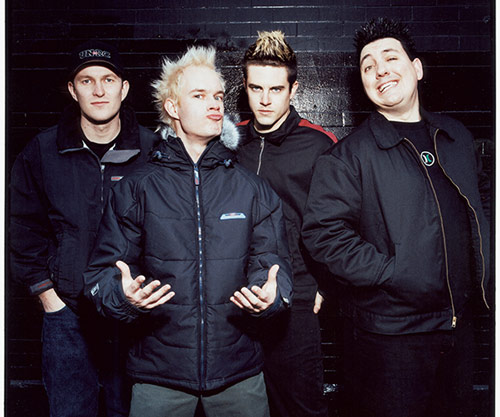 For the last two years, Vancouver based punk band GOB have been on the move. Recently signing with the New York label Arista, the boys have been busy both on the road and in the studio. Now their hard work has paid off with the successful release of their much-anticipated fourth full-length album entitled Foot in Mouth Disease. FAZE got a chance to meet up with them in Toronto as they prepared to kick off their tour with fellow Canadian artists Swollen Members and Avril Lavigne.

Craig, the bass player, sports a black leather vintage motorcycle jacket—the skid marks up and down his sleeves are a reminder of the bands habit of crashing off stages. Their guitarist, Theo, brings up one wipe out when the lead singer, Tom, ran on stage at a show in Calgary then tripped and began to slide on his knees. “He was wearing this polyester Halloween costume so he actually speeds up because of the polyester and slides right off stage,” Theo says, and recalls immediately thinking to himself, “Holy %@!#, Tom’s dead!” Fortunately, Tom survived the incident with only minor bruising to his ego.

Unfortunately, not all accidents are without injury for this hard rocking group as Theo goes on to describe one of his own more painful attempts to kick out the jams. After a 56-hour drive from Ottawa to Portland, Oregon, to play The Warp Tour an exhausted GOB mounts the stage only to have Theo just about cripple himself before they get through their first song. In an attempt to totally stoke the crowd, he leaps from a speaker while jamming on his guitar and ends up jamming his leg instead; “I landed on my left leg wrong and severed a ligament in my knee,” he says. But, in true punk fashion he performed the next night with crutches and a knee brace, “I just shuffled onto the stage and played.” 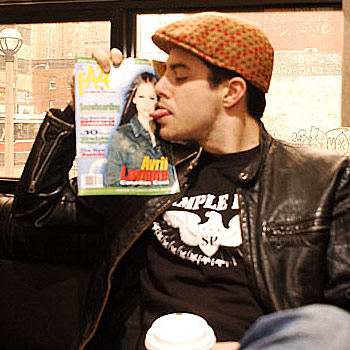 Mid-way through our talk, Prevail, from Swollen Members, drops by to hang out, and eventually the guys start talking about stories from the road again. This one involves Tom jumping onto Theo’s shoulders during a show in Tampa—or at least that’s what was supposed to happen. But, Tom missed his mark and instead of straddling Theo’s shoulders he lands on the back of his head. For a brief moment they stand towering over the stage, “Then we both start to slowly fall forward. And both of us land flat on our faces while playing guitar,” Theo says. “We didn’t hurt ourselves but the record company bought Tom this goalie’s hockey helmet.” As everyone erupts into laugher Theo leans over to me, and in a rare moment of seriousness talks about the effect of playing live and hearing kids sing back their lyrics, “I get a feeling of some kind of accomplishment in our lives,” he says, “It’s very rewarding.” I guess that’s worth a few wipeouts. 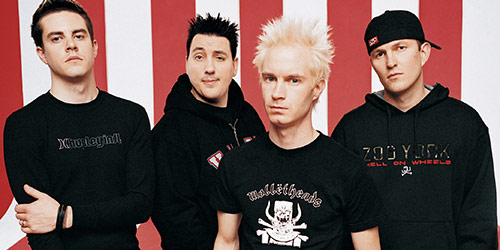 A GOB MOMENT:
We’ve had bras and panties and all kinds of stuff thrown on stage. But this one time I was looking out into the audience and this bra came tumbling towards me through the air like in slow motion and it landed on the neck of my guitar. This thing had to be a size triple E 92—you could use this thing as a catapult.
Theo 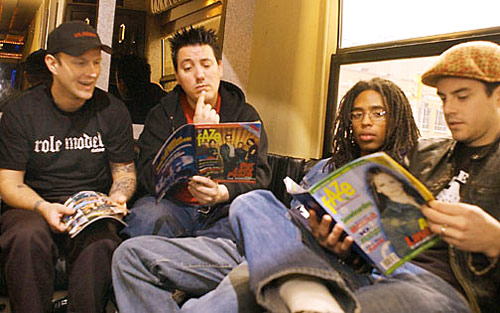 Gob tossing out Faze editor Surya Bhattacharya at the end of the interview, with interview-crasher Prevail from Swollen Members doing nothing but laugh. 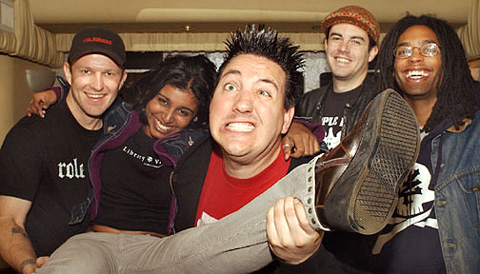