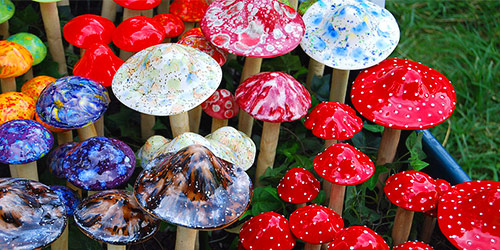 There are several species of hallucinogenic mushrooms, the most common being of the Psilocybe genus containing the chemical substance psilocybin. Other hallucinogenic species of the Panaeolus genus (common in southeast USA) are also used. For thousands of years, other mushrooms were utilized for their mind-altering effects, including species of the Agaric, Conocybe, and Stropharia genera.

The effects of psilocybin include colourful visual hallucinations, spatial, time, and colour distortions, and occasionally auditory alterations. A sense of leaving one’s body may occur. In higher doses, physical effects such as lightheadedness, numbness of the mouth, or anxiety may be noticed. Rarely, flashbacks or depression may be experienced after mushroom use. The hallucinations are often less severe than with LSD, therefore shrooms have been referred to as “LSD with training wheels.”

Mushrooms are consumed raw, dried, or as a soup. Pcilocybe mushrooms have a bitter flavour.

Strong hallucinogen with less harsh distortion of ego than LSD. Can be relaxing. Less likelihood for a bad trip than LSD.

Illegal. Bad taste. Long trip. Driving is basically impossible and should not even be considered.